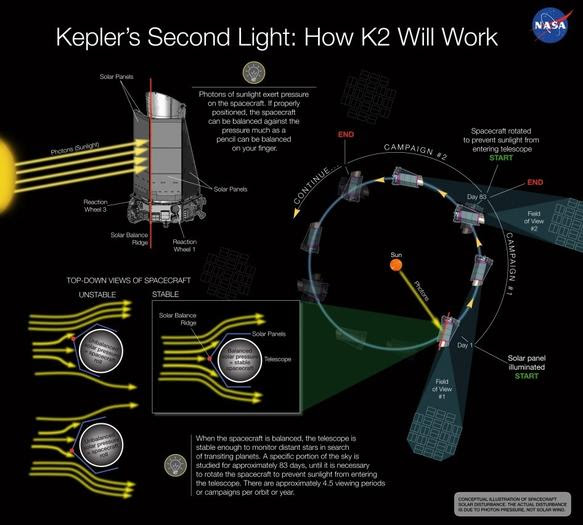 The conception illustration depicts how solar pressure can be used to balance NASA's Kepler spacecraft, keeping the telescope stable enough to continue monitoring distant stars in search of transiting planets. If approved, the K2 mission could be a second chance for the crippled spacecraft, whose precision-pointing ability was crippled last May. (NASA /February 27, 2014)

Don't call it a comeback just yet. Astronomers mourned the Kepler Space Telescope after it was crippled last year. But NASA’s planet hunter may be getting a second chance at life — with an ingenious, just-so-crazy-it-might-work plan that would use the sun’s rays to steer the spacecraft.
The data already collected by Kepler are still turning up a treasure trove of hundreds of planets, as Wednesday's announcement showed. But if it passes NASA approval, the potential new mission, called K2, could mean a whole different kind of search to find Earth-size exoplanets, along with supernovae, protostars and galaxy clusters.
“The K2 mission is basically a brand new mission in a sense, even though it reuses the Kepler Space Telescope,” Kepler mission project manager Steve Howell said in an interview. “I find that kind of exciting.”
Since launching in 2009, the Kepler spacecraft has revealed 3,601 candidate planets (961 confirmed) comprising an interstellar menagerie: super-Jupiters, super-Earths, mini-Neptunes, and other alien worlds that have defied comparison to those in our own solar system.
The spacecraft did so by staring at roughly 150,000 stars in a celestial patch representing 1/400th of the sky, waiting for tiny dips in starlight that would signal a planet was passing by, blocking a little bit of light. But to get the exquisitely precise data it needed to pick out individual dimming stars, it had to be able to hold itself very still.
For that kind of precision pointing, it needed to have at least three working reaction wheels to steer it and hold it in place. The spacecraft came with four, but two of them failed. The first failed in July 2012; the second stopped working in May 2013. That left only two reaction wheels, not enough for Kepler to keep up its planet-hunting work.
Astronomers mourned. (UC Berkeley astronomer Geoff Marcy even penned a poem in memoriam.) The mission had just been renewed a year before. And Kepler’s scientific prowess would only have increased with time because the longer it stared at that patch, the higher the likelihood that it would identify smaller planets farther away from their home stars’ searing rays — and thus, under potentially more ‘Earth-like’ conditions.
The problem was the sun. Out in space, very little disturbs Kepler from its position, except for the photons (light particles) streaming out of the sun that constant bombard the spacecraft. Those photons exert just enough pressure to push the spacecraft around a little bit, which is what the telescope’s reaction wheels try to counteract. Without one of them, Kepler couldn’t combat this pressure in all directions.
Scientists tried to think of workarounds, to no avail. But then engineers at Ball Aerospace in Colorado came up with a mind-boggling solution: Rather than try to fight the sun, they’d use it to their advantage.
The plan uses the sun as Kepler’s “third wheel.” They position a ridge on the spacecraft so that when sunlight hits it, the photons split equally along both sides, thus helping to hold it in balance.
“The K2 mission won’t be able to point that precisely,” Howell said. “It’ll point maybe about four to 10 times worse than the Kepler mission. And while that sounds horrible, it’s still 500 or more times better than anything you can do from a ground telescope.”
Instead of staring at one patch of sky, Kepler’s gaze will trace the ecliptic — the plane in which the Earth orbits the sun — and will cover roughly five times more area, Howell said.
The spacecraft will have to reposition itself roughly every 75 days in its orbit,  sometimes to keep from getting blinded by the sun, other times to move its solar panels out of the shadow. This means it can’t stare at the same patch of sky for years on end, and so it probably won’t be finding Earth-size planets with Earth-like orbits.
The original Kepler mission’s patch of sky was considered somewhat boring in that it was fairly uniform — and with good reason: When you’re looking for tiny fluctuations in light in a field of sun-like stars, you don't need a lot of distractions.
But if approved, K2 will be looking at a much more diverse region of sky with a wide range of astronomical and astrophysical phenomena: planets with short orbits around cooler stars (which, if in their star’s habitable zone, could still harbor water); young, still-forming proto-stars, which could provide insight into star and planet formation; and supernovae and galaxy clusters.
“The scientific opportunities just really started to explode — there’s so much to do,” said UC Berkeley's Marcy, who poetically mourned Kepler.
“And if instead what you’re interested in is the stars themselves," he added, "then new K2 may be even more exciting than the Kepler mission was.”
The researchers demonstrated that their new method would work when they managed to pick out a previously identified planet called WASP-28b. On March 8, they plan a full-blown test, to dip the telescope into the ecliptic and try the method out until the end of May.
“It’s been sort of going from a newborn baby starting to walk to a 3-year-old here in the last four or five months,” Howell said. “We had never flown the spacecraft this way. This idea of balancing the sun had never been tried before.”
By May, Howell said, Kepler's controllers should know if they’ve been approved for the K2 mission, which would cost about $10 million a year for a two-year stint, about half of the original Kepler mission’s current annual cost to operate. And for the next couple of years both missions would run in tandem, Howell said.
“I will have both my hats,” Howell said. “I will switch them every day. Kepler still has a number of years of its mission left.”
ALSO:
NASA's Kepler telescope finds 'mother lode' of 715 planets
Mars rover Curiosity drives backward, tests its 'moonwalking' skills
Artificial muscle made of fishing line is 100 times stronger than yours

Posted by firesprinklers at 9:52 AM