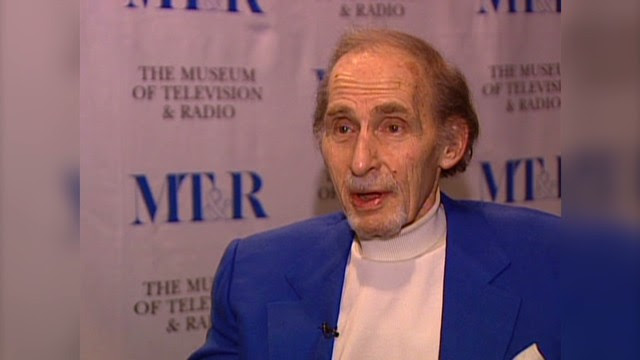 The life and legacy of Sid Caesar

STORY HIGHLIGHTS
(CNN) -- Sid Caesar, whose clever, anarchic comedy on such programs as "Your Show of Shows" and "Caesar's Hour" helped define the 1950s "Golden Age of Television," has died. He was 91.
A friend of the family, actor Rudy De Luca, did not know the exact cause of death, but said Caesar had respiratory problems and other health problems for several years.
Caesar became famous for "Your Show of Shows," which went on the air in 1950. It lasted four years and was followed by "Caesar's Hour," which combined sketches, musical revues and situation comedy.
Both shows featured writers who became famous in their own right, including Neil Simon, Carl Reiner, Mel Brooks, Mel Tolkin, Lucille Kallen and Larry Gelbart. Woody Allen also contributed to Caesar's comedy as a writer for one of his specials.
Brooks visited Caesar last night to say goodbye, De Luca told CNN.
"Sid Caesar was a giant-maybe the best comedian who ever practiced the trade & I was privileged to be one of his writers & one of his friends," Brooks tweeted Wednesday.
Share your memories of Caesar
Caesar also appeared in a number of films, including "It's a Mad, Mad, Mad, Mad World" (1963), "Airport 1975" (1974) and "Grease" (1978). He received a Tony nomination for his performance in the 1962 show "Little Me," with a book by Simon.

Conan's salute to Sid Caesar
Caesar, born Isaac Sidney Caesar in 1922, was part of a pioneering group of personalities who helped establish television in its early days. However, while comedians such as Jack Benny and Fred Allen more or less transferred their radio shows to the new medium and Milton Berle's "Texaco Star Theater" was essentially vaudeville on the small screen, Caesar's "Show of Shows" presented movie parodies, wordless pantomimes and brisk routines between the host and co-star Imogene Coca.
"Sid Caesar was a giant. If it weren't for Sid Caesar there might not be television as we know it. He and his co-stars and writers revolutionized television comedy, and really comedy in general," said biographer Eddy Friedfeld, a close friend of Caesar.
It was comedy pitched at a high (or, just as often, low) level -- and it was done live, every Saturday night at 9.
The versatile Caesar was game for whatever the writers came up with. "Caesar could take on many roles," wrote Tim Brooks and Earle Marsh in the reference "The Complete Directory to Prime-Time Network and Cable TV Shows," calling him a "comic genius." "He was the double-talking foreigner (he was a master of dialects), the henpecked husband or the greasy-haired cad."
The words and comedy of Sid Caesar
Among the regular routines were a skit with Coca, "The Hickenloopers," and Caesar as a gibberish-singing opera singer. Reiner and Howard Morris -- later Ernest T. Bass on "The Andy Griffith Show" -- were frequent supporting players.
"We've lost the greatest, monologist, pantomimic, sketch comedian TV has ever known! Word GENIUS is oft misused but not so here. HAIL CAESAR," tweeted Reiner.
The high-pressure hijinks of the writers' room inspired a number of other works, including "The Dick Van Dyke Show," created by Reiner; the 1982 film "My Favorite Year," produced by Brooks; and the 1993 play "Laughter on the 23rd Floor," by Simon.
"When we came in, we didn't have the slightest idea of what we were going to do. We christened the beginning of the week 'Bloody Monday' because we walked into the room with no material. We had three days to pitch lines and ideas and create six complete sketches," Caesar recalled in a 2011 interview.
The high pressure also led to a drinking and drug problem for Caesar. It took him years to kick the habit, until finally he went blank one day while performing on stage in 1977. He checked into a hospital soon after and got clean.
"I couldn't stand me," he said in 2011. "That's why I drank and took pills. I couldn't stand to be around me."
"Your Show of Shows" lasted just four years, but its impact was such that a best-of selection was turned into a 1973 movie, "Ten From Your Show of Shows."
Caesar followed "Your Show of Shows" with "Caesar's Hour," which included Reiner and Morris but not Coca. Among the show's recurring sketches was one in which the trio played "The Three Haircuts," a rock 'n' roll group.
Other regulars on "Caesar's Hour" included Nanette Fabray and Bea Arthur.
"Caesar's Hour" left the air in 1957. In the following decades, Caesar appeared in a handful of films, most notably the comic extravaganza "It's a Mad, Mad, Mad, Mad World," in which he played dentist Melville Crump. He did a number of his own stunt gags and hurt his back in the process.
He appeared in films by his former writer Brooks, including 1976's "Silent Movie" and 1981's "History of the World Part I," and popped up in films such as "Grease" and "Grease 2" (as Coach Calhoun) and "Cannonball Run II."
He hosted "Saturday Night Live" in 1983 and was named an honorary member of the "Not Ready for Prime Time Players" at the conclusion of the show -- the only non-"SNL" cast member to earn the tribute.
Among his honors were two Emmys, a lifetime achievement award from the Television Critics Association and a star on the Hollywood Walk of Fame.
He was married to Florence Levy for 67 years until her death in 2010. The couple had three children.
Asked by the Archive of American Television how he'd like to be remembered, he responded with six words.
"I brought laughter to the world," he said.
People we've lost in 2014
CNN's Alan Duke contributed to this story.
Posted by firesprinklers at 10:45 PM