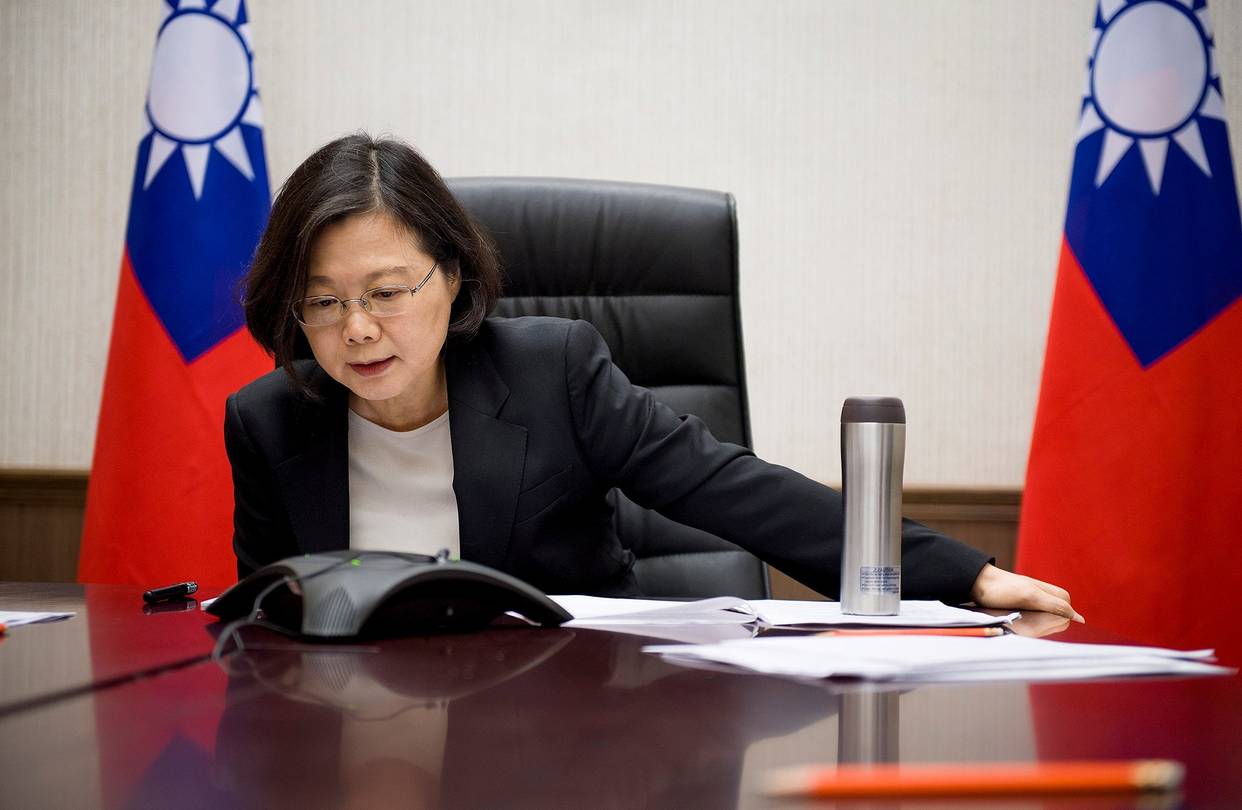 ENLARGE
Taiwan's President Tsai Ing-wen speaks on the phone with U.S. president-elect Donald Trump at her office in Taipei on Dec. 3. PHOTO: TAIWAN PRESIDENTIAL OFFICE/REUTERS
By
DAMIAN PALETTA,
CAROL E. LEE and
JEREMY PAGE
Updated Dec. 5, 2016 10:41 p.m. ET
329 COMMENTS
The verbal confrontation between President-elect Donald Trumpand the Chinese government escalated on Monday, as China responded harshly to attacks by Mr. Trump on its economic and security positions.
The exchange signaled a new and potentially more adversarial relationship between the world’s two largest economies, as Mr. Trump moves to follow through on his campaign-trail promises to challenge China’s trade and currency policies.
Chinese officials late Friday and early Saturday played down Mr. Trump’s precedent-breaking phone call with Taiwan President Tsai Ing-wen, which a transition official said had been arranged by Bob Dole, the former Republican senator and presidential nominee. The call went beyond pleasantries and included a discussion about China and stability in the Asia-Pacific, according to a person familiar with the call. The Chinese directed their ire at Taiwan and not at Mr. Trump.
But they signaled their displeasure with a series of Twitter posts Mr. Trump leveled at China over the weekend, as he criticized its currency policies and military presence in the South China Sea.
In a packed press briefing Monday, China’s foreign ministry spokesman Lu Kang suggested that Beijing had made its unhappiness directly known to members of Mr. Trump’s team.
The People’s Daily, the Communist Party’s leading newspaper, said in a front-page commentary in Monday’s overseas editions that “Trump and his transition team ought to recognize that creating trouble for China-U.S. relations is just creating trouble for the U.S. itself.” It criticized Mr. Trump’s tweets for portraying the phone call “as not a big deal” and warned that if such “petty tricks” are allowed to go unanswered, Beijing could expect to see more of these provocations once he’s in office.
0:00 / 0:00
President-elect Donald Trump took to Twitter to criticize China over its economic and military policies. China’s Foreign Ministry’s response to the tweets suggested that Beijing had made its displeasure known directly to Mr. Trump’s team. Photo: Getty Images
Mr. Dole, in an interview, said the law firm he is affiliated with does work with the Taipei Economic and Cultural Representative Office in the U.S., and that the firm played a role in arranging the phone call. “It’s fair to say that we may have had some influence,” Mr. Dole said.
U.S.-China experts said both Mr. Trump and Beijing appear to be trying to establish boundaries for a new relationship between the countries, which is expected to be more adversarial than that favored by President Barack Obama since 2009.
At the White House, officials fielded multiple calls from Chinese officials over the weekend in which China complained about Mr. Trump’s actions and said it needs stability and predictability in its relationship with the U.S., a senior Obama administration official said.
The Chinese also were seeking guidance on Mr. Trump’s policy intentions, and White House officials said they didn’t know what they are, the administration official said.
“What you have seen in the past eight years is possibly too much predictability” from the U.S. in its approach to China, said Christopher Johnson, a former senior China analyst at the Central Intelligence Agency. “A little unpredictability is a good thing, but too much is scary. There’s a fine line there between good unpredictability and scary, and that’s the balance that has to be found.” 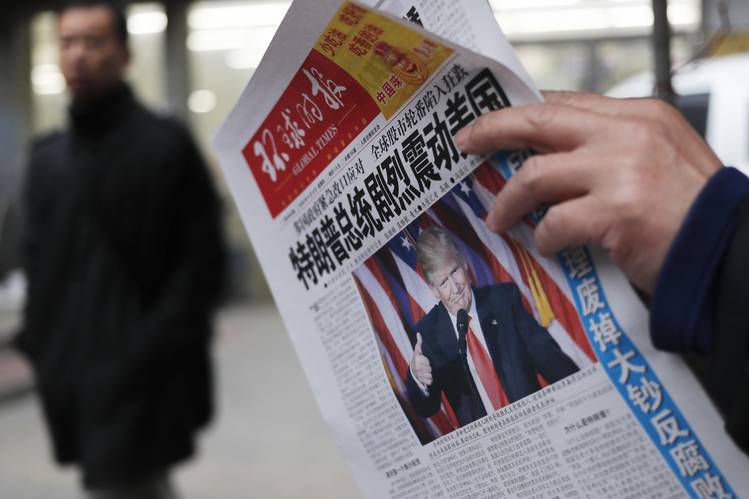 ENLARGE
A man reads a newspaper with the headline that reads ‘U.S. President-elect Donald Trump delivers a mighty shock to America’ at a newsstand in Beijing on Nov. 10. PHOTO:ANDY WONG/ASSOCIATED PRESS
After Mr. Trump becomes president on Jan. 20, his first real test with China could arise in mid-April. That’s when the Treasury Department is required to make public a “currency” report that details the behavior of other nations. During the presidential campaign, Mr. Trump vowed to label China a “currency manipulator,” a designation that would require negotiations between both countries and could be a step toward penalizing Beijing. Such talks could reset the way they engage with each other.
On Sunday, Vice President-elect Mike Pence declined to say during an interview on NBC whether Mr. Trump would label China as a currency manipulator. Jason Miller, a spokesman for Mr. Trump’s transition operation, declined on Monday to expand on Mr. Pence’s comments.
Mr. Trump hammered China during the campaign for its currency and trade policies, and threatened to impose tariffs of between 35% and 45% on Chinese exports to the U.S. It was unclear if he would soften those pledges once elected, but his Friday call with Ms. Tsai brought questions about his approach to China into sharper focus.
Messrs. Trump and Pence described the conversation between Mr. Trump and Ms. Tsai as a congratulatory call initiated by Taiwan. But during the discussion with Taiwan’s leader, which lasted for about 12 minutes, Mr. Trump stressed to Ms. Tsai that his top priority is the U.S. economy, said the person familiar with the call.
“The conversation was about regional stability,” said the person, adding the call was planned weeks in advance. It marked the first of its kind since at least 1979, when the U.S. established formal relations with Beijing.
The terse exchanges between an incoming U.S. president and the country with the world’s second-largest economy have, over the course of 72 hours, broken from more than a decade of fragile diplomacy, experts said.
A rise in U.S.-China tensions before Mr. Trump takes office could shape any cooperation between the two countries on high-stakes issues. It comes amid growing alarm over the nuclear threat from North Korea, for which Mr. Trump will need China’s help to resolve.

Mr. Trump’s call with Ms. Tsai and subsequent tweets accusing China of currency manipulation, over-taxing U.S. imports and building “a massive military complex in the middle of the South China Sea” have generated a “tremendous amount of uncertainty” in Beijing, said David Dollar, the Treasury Department’s economic and financial emissary to China during Mr. Obama’s first term.
“Some of the issues with China are best settled quietly and confidentially,” Mr. Dollar said. “If the whole policy is diplomacy-by-tweet, it’s hard to think that’s going to meet U.S. objectives.”
A number of conservatives, including Sens. Ted Cruz of Texas and Tom Cotton of Arkansas, have cheered Mr. Trump’s engagement with Taiwan. Mr. Cotton said it was a sign that the U.S. wasn’t going to be complacent anymore over China’s behavior. During the campaign, Mr. Trump complained about Beijing’s ability to lure U.S. manufacturers to relocate to China, a message that resonated with voters in Rust Belt states that helped sweep Mr. Trump to victory. For some observers, his confrontation with China is a welcome change.
Last Friday morning, Mr. Trump’s secretary received a call at Trump Tower from Ms. Tsai and patched her through to the president-elect, according to people familiar with the call. It was 10 a.m. in New York and 11 p.m. in Taipei. Ms. Tsai had a prepared set of talking points and was surrounded by Taiwan’s foreign minister, David Lee, as well as two top National Security Council officials and her spokesman, Alex Huang.
Stephen Yates, a former national security adviser to Vice President Dick Cheney who worked as a Mormon missionary in Taiwan, said that for at least a week Ms. Tsai’s name was on Mr. Trump’s list of foreign leaders whom he would speak with by phone.
“To my knowledge, Taiwan was on that list early, and it took some time to arrange,” said Mr. Yates, who is seen as a candidate for a post on Mr. Trump’s national security team. “It was a message in the sense that Donald Trump is not necessarily going to be told what he can or can’t do because a foreign leader says so. That’s exactly the kind of thing that millions of Americans detest about Washington,” said Mr. Yates, who currently is visiting Taiwan for meetings with senior officials.
“If it’s going to cause some pain, then so be it,” he said.
He said the call didn’t necessarily signal a change in policy or strategy on Taiwan, which didn’t rank among the top global challenges for the incoming administration.
“Definitely, there was preparation so the president-elect was not blindsided that there might be reaction from China, from China experts, from the State Department and the White House,” he said. “I don’t think any part of the Trump team is looking for a military conflict. But I also don’t think you have to walk on eggshells to get anything out of Beijing.”
Mr. Yates played a role in introducing the strongest-ever statement of support for Taiwan in the Republic Party’s platform at its national convention this year. The platform incorporated for the first time the “six assurances” given by President Ronald Reagan to Taiwan in 1982. Those include a pledge not to set a date for ending arms sales.
Mr. Trump’s complaints about China are often focused on its economy, which has for decades relied on the purchasing power of consumers in other countries, particularly the U.S.
Mr. Trump used Twitter on Sunday to complain that China “heavily” taxes U.S. products entering their country, but that the U.S. doesn’t tax Chinese imports. China does impose a tariff, a sort of import tax, ranging between 5% and 9.7%, on many products.
The U.S. in many cases charges a tariff on imports from China and many other countries, ranging between 2.5% and 2.9%. Mr. Trump has in the past floated the idea of imposing a tariff against China more than ten times larger.
While Mr. Trump has appeared to soften some of his other campaign stances, on issues such as climate change and torture of terrorism suspects, he has not backed off his calls to more aggressively challenge Beijing.
His approach in recent days “could force the Chinese to feel they have to respond,” said Michael Auslin, a resident scholar in Asian Studies at the American Enterprise Institute. Mr. Auslin said China could decide to take any number of steps, including putting “another 1,000 missiles across the [Taiwan] strait.” It also could signal that it will back away from recent United Nations sanctions against North Korea, or launch a round of cyberattacks against U.S. agencies.
—Jenny W. Hsu in Taipei contributed to this article.
Write to Damian Paletta at damian.paletta@wsj.com, Carol E. Lee at carol.lee@wsj.com and Jeremy Page at jeremy.page@wsj.com

Posted by firesprinklers at 9:22 PM