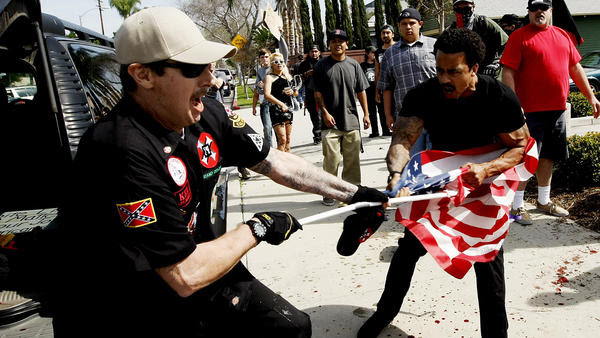 Ku Klux Klan rally in Anaheim erupts in violence.
(Luis Sinco / Los Angeles Times)
James QueallyContact Reporter
Three people were stabbed, including one who was critically wounded, and 13 were arrested when a Ku Klux Klan rally in Anaheim erupted in violence Saturday, police said.
A small group of people representing the Klan had announced that it would hold a rally at Pearson Park at 1:30 p.m., police said. By 11 a.m., several dozen protesters showed up at the park to confront the Klan.
About an hour later, several men in black garb with Confederate flag patches arrived and were escorted by police around the edge of the park.
Violence erupted and some of the protesters could be seen kicking a man whose shirt read "Grand Dragon." At some point, a protester collapsed on the ground bleeding, crying that he had been stabbed.
The Ku Klux Klan's ugly, violent history in Anaheim
A Klansman in handcuffs could be heard telling a police officer that he "stabbed him in self-defense." Several other people were also handcuffed.
Witnesses said the Klansmen used the point of a flagpole as a weapon while fighting with protesters.
Two other people were stabbed during the melee, said Sgt. Daron Wyatt of the Anaheim Police Department. One of those was a protester but the identity of the other victim was not clear.
Six Klansmen and seven protesters were arrested following the fracas, Wyatt said.
Kobe Sato, 18, of Anaheim said a crowd swarmed the KKK members when they arrived at the park and began to display Confederate flags.
Brian Levin, director of CSU San Bernardino's Center for the Study of Hate and Extremism, said he was standing next to the man in the Grand Dragon shirt when a crowd of protesters carrying weapons swarmed the Klansmen.
Planned KKK rally today in Anaheim brings condemnation: 'It's really sad'
A brawl broke out and one of the Klansmen was knocked to the ground and kicked. Levin said he later saw the man's arm bleeding.
Levin said he pushed the Klan leader away as the violence continued and a protester was stabbed.
Levin said he asked the man, "How do you feel that a Jewish guy just saved your life?"
"Thank you," the man replied, according to Levin.
A large crowd gathered at the park, with many demanding to know why Anaheim police did not have a larger presence at the scene before the violence broke out.
Levin was also critical of the lack of police presence prior to the melee.
"There were no police officers here when this started happening," Levin said.
The Klan has a long and troubling history with the city. Klansmen were once the dominant political force in Anaheim, holding four of five City Council seats before a recall effort led to their ouster in 1924.
See the most-read stories this hour >>
At the height of the group's power in Orange County, nearly 300 Klansmen lived in Anaheim, patrolling city streets in robes and masks. A large KKK rally once attracted 20,000 people to the city.
KKK activity nationwide has decreased dramatically in recent decades, according to the Southern Poverty Law Center, which estimated the group has between 5,000 and 8,000 members across the country.
The group's activities have been sporadic in Southern California in recent years. Last summer, at least 100 residents of Whittier and Fullerton awoke to find packets containing KKK fliers, rife with racist rhetoric, and candy in their driveways. A Santa Ana neighborhood was also blanketed with KKK fliers on Martin Luther King Jr. Daylast year, police said.
An eight-foot cross was burned outside the home of a black man in Anaheim Hills in 2003, and the FBI investigated the case as a hate crime, but police did not specifically link that case to the KKK.
Anaheim, home to Disneyland and Orange County's largest city, is now more than 52% Latino and about 28% white, according to the2010 U.S. Census.
MORE: Get our best stories in your Facebook feed >>
ALSO
California Highway Patrol needed nearly four hours to catch a runaway 'unicorn'
Suspected street racer arrested in crash that killed three and shut down 5 Freeway
Killing of In-N-Out Burger worker stuns friends and family; police hunt for killer


Posted by firesprinklers at 6:15 PM