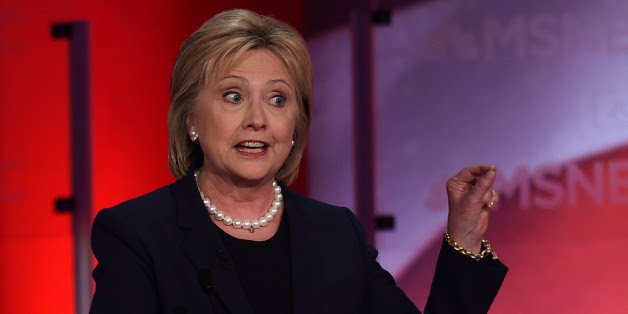 JEWEL SAMAD VIA GETTY IMAGES
Former Secretary of State Hillary Clinton, in her debate with Senator Sanders minutes ago, said that she went to Wall Street and told them to stop their "shenanigans." The context was that she was being asked to respond to the complaint that she was too close to on Wall Street billionaires. She had every incentive, therefore, to demonstrate how tough she would be on Wall Street.
In that context, the best she could muster was the pusillanimous "shenanigans." Here is a typical definition of that word with examples.

1. : a devious trick used especially for an underhand purpose2. 2a : tricky or questionable practices or conduct --usually used in pluralb : high-spirited or mischievous activity --usually used in plural
Examples of SHENANIGAN1. students engaging in youthful shenanigans on the last day of school2. an act of vandalism that went way beyond the usual shenanigans at summer camp

Hillary cannot bring herself to use the "f" word in the context of Wall Street CEOs leading the largest and most destructive fraud epidemics in history - frauds that made them spectacularly wealthy. A few minutes later, Bernie said that "fraud" was Wall Street's business model.
There Is No "If" -- Systemically Dangerous Banks Pose a "Systemic Risk"
Hillary then said that we should end systemically dangerous institutions (SDIs) "if" they posed "systemic risk" and praised President Obama for supporting Dodd-Frank provisions that provide a convoluted process for doing so that a new president likely could not use effectively. There can be disputes on the margins as to whether the 25th largest U.S. bank is systemically dangerous, but there is no question but that the largest 20 banks in the U.S. pose a systemic risk. There is no question but that President Obama has not, and will not, force a single one of them to shrink to the point that they no longer pose a systemic risk.
I do not think that many people believe that Hillary will force even a single gargantuan bank to do so, but if that is her intent, the word she needs to use is "will" rather than "if." Hillary should say: "If I am elected President I will promptly require the roughly 20 largest banks to shrink to a size where they no longer pose a systemic risk."
Hillary Did Not Take on Wall Street in 2007 -- She Blamed the Victims for Being Defrauded
In the debate tonight, Hillary again claimed that in her 2007 speech to Wall Street she came down on them like a ton of bricks. Hillary's most pointed two sentences in her supposed takedown of the banksters were:

But finally, responsibility also belongs to Wall Street, which not only enabled but often encouraged reckless mortgage lending... Wall Street may not have created the foreclosure crisis, but Wall Street certainly had a hand in making it worse.

No, the banksters made millions of deliberately fraudulent, not "reckless" loans and they most assuredly "created the foreclosure crisis." Hillary went on to throw the victims of these frauds under the bus -- blaming the foreclosure victims for not understanding the loans the brokers pushed on them.
Here is what two prominent elected officials said about the same issue. The Nation's longest serving state Attorney General, Tom Miller of Iowa, investigated what actually happened and testified before the Fed (before Hillary's Wall Street speech) as follows:

"[Many originators invent] non-existent occupations or income sources, or simply inflat[e] income totals to support loan applications. Importantly, our investigations have found that most stated income fraud occurs at the suggestion and direction of the loan originator, not the consumer."

And here is what Lisa Madigan, the Attorney General of Illinois' investigations found:

"Madigan [IL AG] testified to the Financial Crisis Inquiry Commission (FCIC), 'Our multistate investigation of Ameriquest revealed that the company engaged in the kinds of fraudulent practices that other predatory lenders subsequently emulated on a wide scale: inflating home appraisals; increasing the interest rates on borrowers' loans or switching their loans from fixed to adjustable interest rates at closing....'" (p. 12).

Here is the reaction of another prominent official to the plight of the homeowners:

"Along with innovation came complexity, and complexity is the enemy of transparency. I had high school friends and grade school friends that got put into mortgages by unscrupulous brokers. Some lost their houses, and I spent time with them and looked at what they had been conned into accepting--they didn't understand what they were signing on for. It was despicable."

"Despicable." The person I am quoting is Hank Paulson, former head of Goldman Sachs, and Secretary of the Treasury under President Bush. Paulson is not by nature someone with great sympathy for the poor. Hillary urges us to believe that because she started as a lawyer for an NGO she has established that she is a person of exceptional empathy. But her 2007 speech to Wall Street was a direct test of character that she failed. Hank Paulson, the leader of the "Vampire Squid," won the test of reality and human sympathy and Hillary lost -- and it wasn't close.
Hillary could easily have gotten the issue correct by talking with Miller and Madigan to get the facts. Both AGs are leading endorsers of Hillary's campaign. Hillary did not investigate, she did not even take the step that Hank Paulson did and check with friends with real experience with foreclosures.
Hillary simply believed the banksters' myths about the crisis. She pronounced sentence on the people losing their homes who were the victims of the banksters' frauds. She implicitly cast the banksters as the victims of the homeowners. The best she could muster was to note that the banksters should have vetted the loans more carefully. What courage.
Follow William K. Black on Twitter: www.twitter.com/WilliamKBlack


Posted by firesprinklers at 4:24 PM