Astronaut Edgar Mitchell -- A Legacy For Exploration, Sustainability, and Consciousness 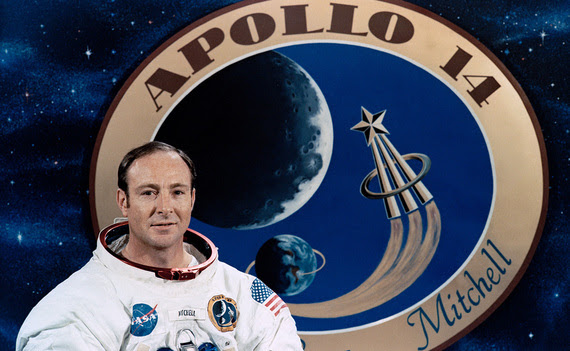 Photo from NASA
February 4th 2016, Astronaut Edgar Mitchell passed away peacefully on eve of the 45th anniversary of his lunar landing, which happened February 5th, 1971.
He was the 6th astronaut to walk on the moon as part of the Apollo 14 mission. Mitchell, Alan Shepard, and Stuart Roosa were on the crew which set a record for more than nine hours on the lunar surface, collecting rocks and taking measurements for research.
Mitchell was an American naval officer, engineer, and test pilot with a doctor of science in aeronautics and astronautics from M.I.T.
Through the years he garnered honorary doctorates from numerous universities along with several distinguished service medals, and was nominated for the Nobel peace prize.
Most recently he was known for being outspoken about UFO phenomena and cover-ups. He's even cited in an intro for the latest X-Files television series.
However, Mitchell's most important legacy could be his work to research consciousness and further sustainability efforts based on an epiphany he had during his space mission.
From his experience in space, Mitchell felt a greater perspective or world-view would radically change how we address political and environmental challenges for the sustainability of life on earth.
An Epiphany from Space
Officially, Mitchell was a scientist and engineer, but underlying that he was an explorer. Although he explored far away from earth, his most profound expedition may have been his trip back. It's an experience he described as "an overwhelming joy of seeing Earth from that perspective." 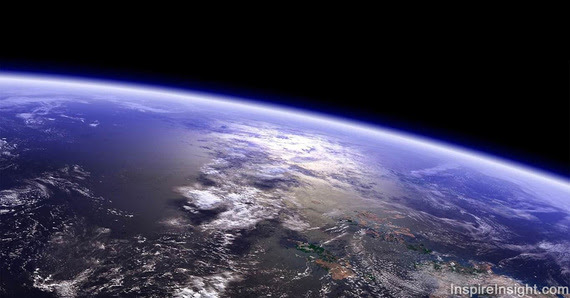 Photo from Elektro-L Weather-Satellite
I remember meeting Edgar Mitchell during early days of The Overview Institutewhere Mitchell was a board member.
Hanging out backstage after a presentation he began recounting his experience coming back to earth.
The story is well documented now across the internet. But to this day I remember what he told us so personally.

That profound experience inspired his continued exploration of consciousness.
A year after his return to earth, Mitchell established the Institute of Noetic Sciencesto support scientific research into the nature of consciousness in all things.
As it's written on the IONS website, "Mitchell was convinced that the uncharted territory of the human mind was the next frontier to explore, and that it contained possibilities we had hardly begun to imagine."
The Bigger Picture
Mitchell called the kind of experience he had a "big picture effect." He likened it to an 'aha' moment - that sense of wonder you have from a mountain top seeing a broader picture of what's going on.
His experience in space is also documented as "the overview effect" as featured in this video.
Seeing the whole of planet earth from a greater perspective, Mitchell felt "we are all connected - to everything."
From that perspective, man-made borders and divisions are not even visible.
Seeing the integrated nature of life on earth obviously creates a discord with how we're actually living on planet earth.
Mitchell is famous for saying, "from out there on the moon, international politics look so petty. You want to grab a politician by the scruff of the neck and drag him a quarter of a million miles out and say, 'look at that [Earth] you son of a bitch.'" 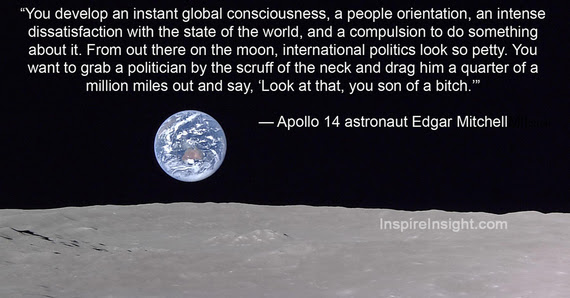 Photo from JAXA/NHA
Mitchell has written, "learning to see ourselves, our small planet, and our actions toward nature and each other from that larger perspective can strongly influence the course of evolution toward a more peaceful and sustainable future."
With this awareness Mitchell became more vocal about the change in consciousness and sustainability efforts required for continuing life on earth. Mitchell captured his statements on sustainability through this video.
Looking beyond earth, Mitchell said, "We are not alone in the universe. We are just one grain of sand on a huge beach."
His experiences and the legacy of his work inspire us to continue exploration into areas yet uncharted, to explore the mystery of consciousness, to discover what it means to be a human, part of this whole earth ecosystem, a living being that's part of a greater universe.
Finally, here's a video inspired by my dad plus what I learned from Edgar Mitchell's experience and working with The Overview Institute.
---
Read more about Mitchell's experience through his book, "The Way of the Explorer".
He is also featured in Frank White's book "The Overview Effect: Space Exploration and Human Evolution" in which several astronauts are interviewed about their experiences in space.
'World View' a documentary series about astronauts' radically changed paradigms from seeing earth in space is underway at InspireInsight.com.
Continue with us to unravel consciousness and awareness for personal, social, and global change through AwakeFree.com
.
Follow Jeff Singh on Twitter: www.twitter.com/AvatarRock


Posted by firesprinklers at 4:54 PM