IBM: What Makes This Tiny Chip a Breakthrough 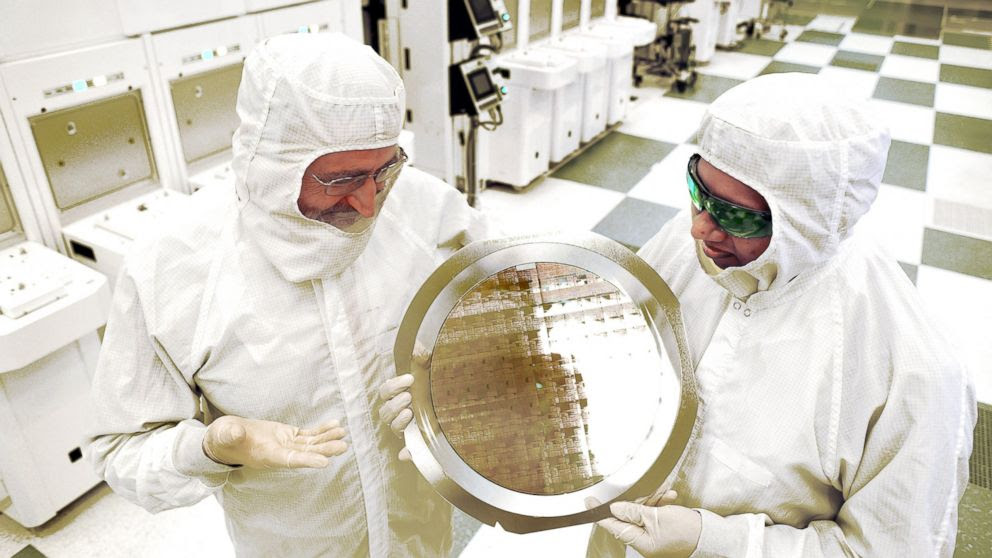 SUNY College of Nanoscale Science and Engineering's Michael Liehr, left, and IBM's Bala Haranand look at wafer comprised of 7nm chips on Thursday, July 2, 2015, in a NFX clean room Albany.
Darryl Bautista/Feature Photo Service for IBM
IBM showed off a prototype chip today that is being hailed as a technological breakthrough for the tiny transistors -- electrical switches that help power a computer -- that have been made so thin they're 1/10,000th the width of a human hair.
The breakthrough -- the result of research at IBM and the State University of New York Polytechnic Institute in Albany -- could allow as many as 20 billion transistors to be placed on a chip the size of a fingernail and is half the size of the current 14 nanometer standard, company officials said. A nanometer is one-billionth of a meter.
While the technology is a prototype chip, it could have a tremendous impact "on the anticipated demands of future cloud computing and Big Data systems, cognitive computing, mobile products and other emerging technologies," according to the company.
Moore's Law: What's in Store For the Next 50 Years of Computing Power
The breakthrough chip is the result of a $3 billion investment IBM made last year in partnership with the state of New York, Samsung and other technology suppliers for the purpose of chip research and design, officials said.
Today's announcement also shows Moore's Law, the standard for advancing computing power, is still alive and well.
"This is research that has been done and is not an actual product, but it is a great example that Moore’s Law continues and shows the potential for smartphones, tablets, PCs and even cars to be twice as smart as they were before at the same energy level," Patrick Moorhead, an analyst at Moor Insights & Strategies, told ABC News.
In 1965, Gordon Moore, a co-founder of Intel, predicted the number of tiny electrical switches that could be placed on a computer chip, called transistors, would double approximately every two years.
That has largely held true -- look no further than the computers, cameras, phones and music players that are now condensed into a single smartphone. However, some engineers have warned it could come to an end within the decade.
In 2013, Robert Colwell, a former Intel electrical engineer, predicted Moore's law would be dead within a decade due to the difficulty of shrinking transistors beyond a certain point to fit more on a chip.
Colwell said it would be difficult to shrink the transistor density beyond either 7 nm or 5 nm.
"We will play all the little tricks that we still didn't get around to," he said at the time, according to the BBC. "We'll make better machines for a while, but you can't fix [the loss of] that exponential. A bunch of incremental tweaks isn't going to hack it."
Posted by firesprinklers at 4:31 PM