An Amtrak train traveling from Washington, D.C. to New York City partially derailed and crashed in north Philadelphia on Tuesday night. At least 50 people were injured, according to multiple reports.
Philadelphia Fire Commissioner Derrick Sawyer called it a mass casualty incident,WPVI reported.
Eight to 10 cars of Train 188 derailed on the 2000 block of Wheatsheaf Lane, officials told WCAU. Several cars reportedly rolled over after the train derailed at Frankford Avenue and Wheatsheaf Lane, according to ABC Philadelphia's Jim Gardner.
Approximately 240 people were on board the train at the time of the incident, officials said.
"We were rolling along nice and smooth and then all of a sudden we were on our side," passenger Don Kelleher told WCAU.
"All of a sudden it felt like the brakes were hit hard and then our car," passenger Michael Black said.
Video from the scene showed emergency crews with flashlights swarming the crash site. A triage center has been setup, and buses are being used to transport passengers from the scene.
Although dozens of passengers were hurt when the trail derailed, the extent of their injuries is known at this time.
Associated Press photographer Paul Cheung was reportedly on the train and said it appeared as if the train went off the tracks. The front of the train “looks pretty bad,”Cheung said. 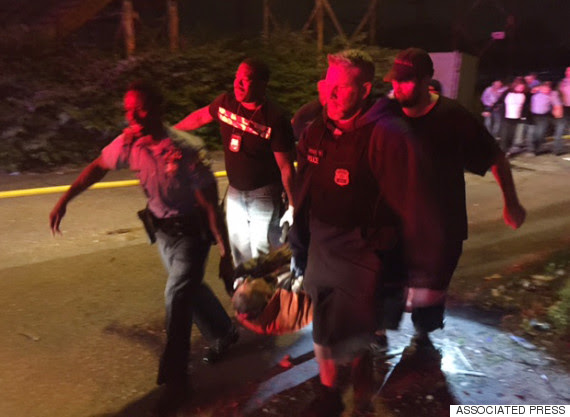 A passenger is carried following an Amtrak train crash near Philadelphia. (AP Photo/Paul Cheung)
NBC Nightly News' producer Janelle Richards, who was apparently on the train, described a harrowing scene.
According to Richards, the train was supposed to arrive in New York at 10:30 p.m. Richards heard a loud crash around 9:20 p.m.
Former U.S. congressman Patrick Murphy (D-Fla.) tweeted from the train, saying that he was not harmed, but others appeared injured.
The National Transportation Safety Board is gathering information about the incident, but at this time, the cause of the crash is unknown.
On Sunday, an Amtrak train heading for New Orleans hit a flatbed truck at a railway crossing in Amite, Louisiana, killing the truck's driver and injuring two on the train.
This is a developing story. Check back for updates.
Posted by firesprinklers at 8:46 PM