Battle of Gettysburg Anniversary: How Weather Impacted the Bloodiest Battle of the Civil War

More Sharing ServicesShare|Share on facebookShare on twitterShare on linkedin

A scene of the battle via the Robert N. Dennis collection of stereoscopic views/ United States/ Pennsylvania/ Stereoscopic views of Gettysburg, Pa.
The Battle of Gettysburg is said to be the bloodiest battle of the American Civil War. Fought in Gettysburg, Pa., July 1 through 3 in 1863, historians put the number of causalities and missing Union and Confederate soldiers at 46,286. Bayonets, rifled muskets, cannons and infections all contributed to the carnage that took place 150 years ago today. The weather, however, created some causalities as well.
A Gettysburg man by the name of Rev. Dr. Michael Jacobs, a math professor at what was then called Pennsylvania College, had a strong interest in weather and recorded his observations three times a day, every day, even during the battle. As a result, the "Meteorology of the Battle", was published, and it gives very specific details on the weather at the Battle of Gettysburg and the role it may have played in battle.
Ben Neely, Executive Director at the Adams County Historical Society, emphasized that the most damaging aspect of the weather for this event actually occurred on July 4, the day after the battle had ended. Rain fell across the area for most of the day; Rev. Dr. Jacobs put the total at 1.39 inches. While wounded still lay on the field, some may have felt welcomed by the break in action. Some wounded soldiers had still not been moved from low-lying areas by the Plum Run Creek, however, which overflowed its banks. Those stranded near the flood waters, reportedly all Confederates, drowned.
According to AccuWeather's Vice President of Marketing and Civil War historian Dr. Lee Rainey, an even larger issue that was faced as a result of the rain was the retreat attempts made by the Confederate Army on July 4.
"They had to move a 17-mile-long train of  filled with wounded soldiers over the dissolving dirt roads back to Virginia," he said. "And the rains caused the Potomac River--easily fordable on the march north--to flow so high that the army was trapped on the north side with the Union forces in pursuit. The Confederates dug in for a desperate battle, but in the end were able to  across the river on the 13th, the day before Meade's planned attack." 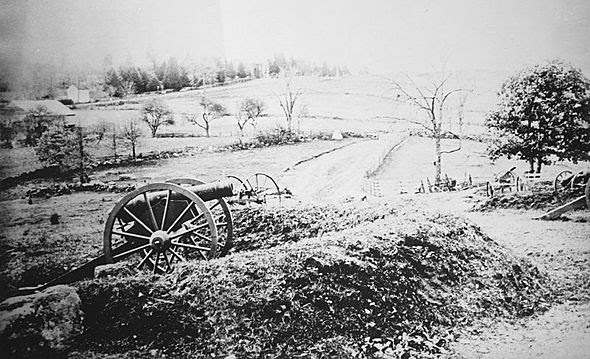 A cannon sits on Stevens' Knoll in Gettysburg, Pa., on July 1, 1863. This was the first day of the Battle of Gettysburg. 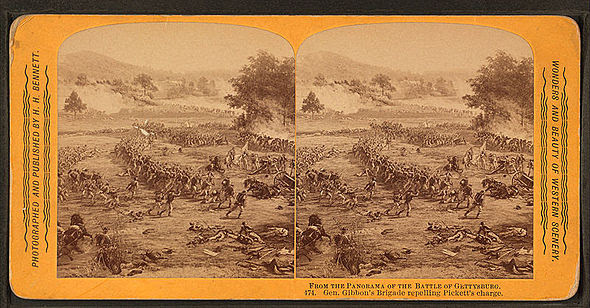 The days leading up to that point were not without tragedy as fighting consumed the fields of the Pennsylvania town. For its part, the weather was more cooperative at the battle's start. July 1, the first day fighting began, had a sky covered by cumulostratus clouds all day, according to Rev. Dr. Jacobs' detailed reports. The breeze was typically southerly at only 2 mph; the afternoon temperature was a comfortable 76 . The second day started with similar cloud cover, but Rev. Dr. Jacobs wrote that the sky was three-tenths clear by the afternoon, when temperatures went up to 81. Likewise, the cloud cover started the third day and cleared considerably by the afternoon. The cloud cover that remained, however, was the "massive thunder-cloud of summer." A thunderstorm started around 6 p.m. EDT. "The thunder seemed tame, after the artillery firing of the afternoon," Rev. Dr. Jacobs wrote.
The temperatures were not as severe as they could have been. Current records from 1981 to 2010 put the average high for the area at 87 every day in July, but most of the Battle of Gettysburg was fought in the 70s. The cloud cover also offered a break from direct sunlight. Had these conditions been less favorable, there may have been even more casualties.
Related:
Gettysburg Anniversary Forecast
West Drought Bans July Fourth Fireworks, Rain Threatens East
Relentless Downpours for East in July
Lee Houser of the Civil War Heritage Foundation, Inc., said that heat stroke and heat exhaustion would likely have affected many soldiers, particularly Union soldiers. Union blue uniforms were primarily wool, but the Confederate's gray uniforms may have used some cotton, which is lighter. After marching, some for over 30 miles, even in lower-than-average temperatures, it would have taken a physical toll on soldiers. Add in the thick uniforms, supplies, heavy machinery and weapons that had to be carried along, and it would have been a lot of strain on their bodies. When the temperatures did climb, some succumbed to the heat.
Dr. Rainey, who spent years as a Civil War re-enactor, expressed the discomfort of authentic Civil War uniforms worn in Gettysburg with July's heat and humidity. He added, however, that it was something the soldiers in 1863 would have been more used to.
Neely contends that while heat would have been damaging, conditions may not have been as bad as they seem from a modern-day perspective.
"They wore wool clothes every day," he said. "This was something they would have been accustomed to."
Records do indicate that the heat played a factor in the war by exhausting soldiers and causing heat stroke, but perhaps the hot conditions were not as damaging as they had the potential to be; not as damaging as the heavy rain that followed.
Posted by firesprinklers at 3:13 PM