For Detroit, all roads probably lead to bankruptcy court 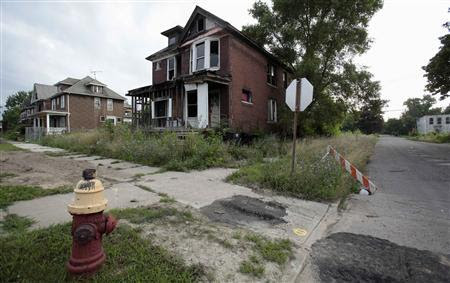 By Nick Brown
Wed Jul 24, 2013 12:26am EDT
(Reuters) - With fights over whether Detroit can pursue its bankruptcy filing playing out in both federalbankruptcy court and Michigan state court, many are wondering how the matter will be resolved.
It is impossible to predict precisely how the two cases will play out, but experts agree that sooner or later the dispute is likely to end up with thebankruptcy court handling the city's financial restructuring.
Under federal rules, a bankrupt municipality like Detroit benefits from an automatic stay of litigation taking place in other courts. But before that can take effect, a bankruptcy court must rule that the municipality is eligible tofile for bankruptcy.
While the bankruptcy court will not decide Detroit's eligibility for several weeks, the city can in the meantime invoke the right to an automatic stay in the face of any adverse court ruling in state court, experts said, forcing opponents to litigate in bankruptcy court.
Here are the scenarios under which the bankruptcy court gets jurisdiction of Detroit's bankruptcy.
THE CASES
On July 17, retired city workers filed a lawsuit in state court in Lansing, Michigan, saying a bankruptcy filing would violate protections for their pensions under the state constitution.
On July 18, Detroit Emergency Manager Kevyn Orr filed the biggest-ever U.S. municipal bankruptcy, with $18.5 billion in debt and unfunded liabilities, in federal bankruptcy court in Detroit.
STATE COURT LITIGATION
On July 19, Judge Rosemarie Aquilina ordered Michigan Governor Rick Snyder to withdraw his consent for the bankruptcy. The state appealed the ruling. The appeals court's eventual decision could itself be appealed to the Michigan Supreme Court.
1) If the state court system reverses Aquilina's order, the bankruptcy court case would continue on its current course.
2) If the state courts uphold Aquilina's order, Orr could simply refuse to comply. He could argue, under the Supremacy Clause of the U.S. Constitution, that the automatic stay in bankruptcy bars the enforcement of legal judgments from state courts. This would force the objectors to litigate that question in the bankruptcy court.
EXTENSION OF AUTOMATIC STAY
Also on July 19, Orr asked Judge Steven Rhodes to expand the reach of the automatic stay to cover Snyder and other state entities. The city retirees objected, saying Rhodes lacks jurisdiction to act on the request because Detroit should not be in bankruptcy. Rhodes set a hearing on that request for July 24.
1) If Rhodes grants Detroit's request, it will show he believes his court has jurisdiction over Detroit. But, in practice, such a ruling would have little effect on state courts, which may continue to consider state constitutional questions. The bankruptcy case would then likely proceed to its eligibility hearing.
1) If Rhodes denies Detroit's request, it could mean many things, depending on the reasoning he gives. But the case would still likely proceed to an eligibility hearing in bankruptcy court.
The city's request was "expedited," which experts say is likely to result in a ruling within days, or even immediately.
ELIGIBILITY
The next stage would be an eligibility hearing in bankruptcy court, in which Detroit must prove it is eligible to go bankrupt under Chapter 9, which governs municipal bankruptcies.
The eligibility hearing is the forum in Chapter 9 for objectors like Detroit pensioners to have their say in court.
Rhodes has not set a date for an eligibility hearing, which typically comes within several weeks after a bankruptcy filing. The city has asked Rhodes to compel opponents to file their briefs by August 19, which, if he agrees, would suggest a hearing soon after that.
(Reporting by Nick Brown in New York; Editing by Lisa Shumaker)
U.S.

Posted by firesprinklers at 5:49 PM