Edward Snowden is a whistleblower, not a spy – but do our leaders care? 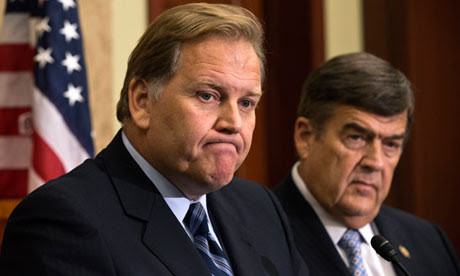 The Twitter account of House intelligence committee chairman Mike Rogers, left, placed Edward Snowden in the company of two infamous double agents. Photograph: J Scott Applewhite/AP
According to US legislators and journalists, the surveillance whistleblowerEdward Snowden actively aided America's enemies. They are just missing one essential element for the meme to take flight: evidence.
An op-ed by Representative Mike Pompeo (Republican, Kansas) proclaiming Snowden, who provided disclosed widespread surveillance on phone records and internet communications by the National SecurityAgency, "not a whistleblower" is indicative of the emerging narrative. in the Wichita Eagle on 30 June Pompeo, a member of the House intelligence committee, wrote that Snowden "has provided intelligence to America's adversaries".
Pompeo correctly notes in his op-ed that "facts are important". Yet when asked for the evidence justifying the claim that Snowden gave intelligence to American adversaries, his spokesman, JP Freire, cited Snowden's leak of NSA documents. Those documents, however, were provided to the Guardian and the Washington Post, not al-Qaeda or North Korea.
It's true that information published in the press can be read by anyone, including people who mean America harm. But to conflate that with actively handing information to foreign adversaries is to  on the crucial distinction between a whistleblower and a spy, and makes journalists the handmaidens of enemies of the state.
Yet powerful legislators are eager to make that conflation about Snowden.
The Twitter account of Representative Mike Rogers (Republican, Michigan), the chairman of the House intelligence committee, on 18 June placed Snowden and accused WikiLeaks source Bradley Manning in the same company as Aldrich Ames and Robert Hanssen, two infamous CIA and FBI double-agents. (The tweet appears to have been deleted.)
When I asked about the conflation, Rogers' Twitter account responded: "All 4 gave critical national security information to our enemies. Each did it in different ways but the result was the same."
Never to be outdone, Peter King, a New York Republican and former chair of the House homeland security committee, proclaimed Snowden a "defector" on 10 June. Days later, Snowden left Hong Kong to seek asylum in an undetermined country – a curious move for a defector to make.
Once elected and appointed leaders casually conflate leaking andespionage, it is a matter of time before journalists take the cue. For insight into the "fear and isolation that NSA leaker Edward Snowden is living through", CNN turned to Christopher Boyce – who sold US secrets to the USSR before becoming a bank robber.
There are understandable suspicions that Snowden may have aided foreign intelligence services in order to aid in his escape from Americancriminal justice. While some have speculated that the Russian or Chinese intelligence services might have snuck a look at the highly sensitive intelligence material Snowden is carrying, that material is heavily encrypted. For what it's worth, in a Guardian webchat I asked Snowden directly if he would trade access to his documents for asylum. He said he would not.
Perhaps Snowden lied. Perhaps he might change his mind. But all of that is far off in the realm of speculation. As things stand now, there is no evidence Snowden has aided any US adversary or intelligence service, wittingly or not.
Even the Obama administration has stopped short of terming Snowden a spy, even in the course of attacking his character. (Yes, he was indicted under the Espionage Act, but the actual charges against him are theft ofgovernment property, unauthorized communication of national defense information, and willful communication of classified intelligence information to an unauthorized person.) In an email meant to discredit Snowden in the press, an anonymous "senior administration official" told reporters on 24 June that Snowden's ostensible idealism "is belied by the protectors he has potentially chosen: China, Russia, Cuba, Venezuela and Ecuador". That's something to remember the next time Washington wants to talk about its commitment to human rights while cooperating with, say, China and Russia. 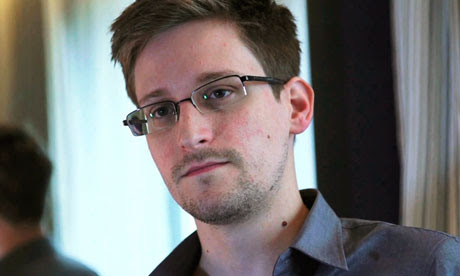 Edward Snowden. Photograph: Reuters/The Guardian
When asked directly if there was any evidence that Snowden had cooperated with any intelligence service or American adversary, the administration and Congress declined to provide any. The office of the director of national intelligence, James Clapper, declined to comment for this story. The Justice Department and the House intelligence committee didn't even respond to inquiries.
By all means, consider Snowden a hero, a traitor or a complex individual with a mixture of motives and interests. Lots of opinions about Snowden are valid. He is a necessarily polarizing figure. The information he revealed speaks to some of the most basic questions about the boundaries between the citizen and the state, as well as persistent and real anxieties about terrorism.
What isn't valid is the blithe assertion, absent evidence, that the formerNSA contractor actively collaborated with America's enemies. Snowden made classified information about widespread surveillance available to the American public. That's a curious definition of an enemy for US legislators to adopt.
Posted by firesprinklers at 1:47 PM