Shi Da, 39, a product manager at an Internet company in Hangzhou, China was traveling with wife and teenage son aboard the Asiana Airlines 777 that crash-landed Saturday. He asked that his face be partially obscured. (July 7)
William M. Welch, Chris Woodyard and Doug Stanglin , USA TODAY8:20 p.m. EDT July 7, 2013

Pilot tried to abort landing and come around for another try 1.5 seconds before crash. 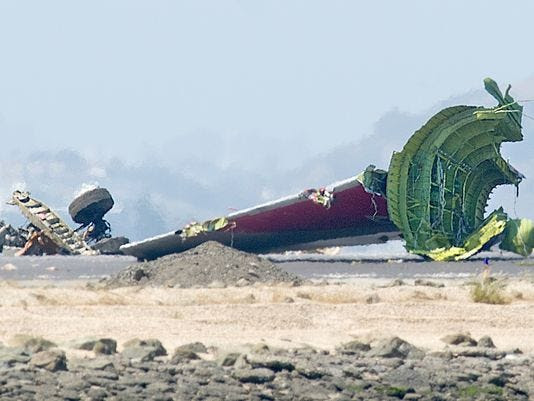 SAN FRANCISCO -- Asiana Airlines Flight 214 was traveling well below its target speed for landing when it crashed short of the runway Saturday,National Transportation Safety Board Chairman Deborah Hersman said at a briefing Sunday.
"The speed was significantly below 137 knots, and we're not talking a few knots," she said.
The San Mateo County Coroner, Robert Foucrault, said separately Sunday that his office was investigating whether one of the two Chinese girls killed in the crash had been run over by a rescue vehicle. He said San Francisco Fire Department officials notified him at the site on Saturday that one of the 16-year-olds may have been struck on the runway. An autopsy was to be  Monday.
Hersman provided details of what investigators found in their initial review of the plane's flight data and cockpit voice recorders: "The approach proceeds normally as they descend. There is no discussion of any aircraft anomalies or concerns with the approach. A call from one of the crew members to increase speed was made approximately seven seconds prior to impact."
The "stick shaker," which gives an audible and motion signal warning that the plane is flying too slowly and is about to stall, sounds "approximately four seconds prior to impact."
The pilot requested a "go around" -- to abort the landing, fly around the airport and try again, she said.
"A call to initiate a go around occurred 1.5 seconds before impact."
STORY: San Francisco hospitals treat scores of crash survivors
STORY: How do you get 300 people off a burning jet?
STORY: Asiana crash deaths ID'd as 2 Chinese teens
Information from the plane's two recorders does not point to human error as a cause of the crash without a fuller investigation, Hersman said.
"Everything is on the table," she said.
The flight crew has not yet been interviewed, a process that may take a few more days, she said. The engines will be dismantled to look for further clues.
"What we need to do is corroborate the information we have on both the flight data recorder and the cockpit voice recorder" for a  picture of what happened, she said, but the two devices so far appeared to "mirror" each other -- that anomalies in the data appear to correspond to the pilots' actions.
Earlier Sunday, officials from the  said the black boxes from the Boeing 777 had been recovered and had arrived in Washington, D.C.
The CEO of Asiana Airlines said Sunday he had ruled out engine or mechanical problems in the crash of a Boeing 777 at San Francisco airport that killed two 16-year-old Chinese students and injured more than 180 people after it appeared to touch down tail-first short of the runway.
Yoon Young Doo, the president and chief executive of the airline, speaking at company headquarters Sunday, said, "I bow my head and sincerely apologize for causing concern to the passengers, families and our people."
"For now, we acknowledge that there were no problems caused by the 777-200 plane or engines," Yoon told reporters Sunday at the company headquarters.
He declined to comment directly on whether the crash was due to pilot error or air-traffic controllers but said the three captains on board had more than 10,000 flying hours of experience between them.
The two teenage girls who died were identified Sunday as Ye Mengyuan and Wang Linjia from China's eastern Zhejiang province, according to China Central TV. They were among a group of 29 middle-school students and five teachers heading for a two-week summer camp in the United States. Their bodies were found outside the plane, which had come to rest between runways.
Spokesmen for 10 area hospitals said at least 168 people were treated for injuries. Eight were still in critical condition.
Images from the scene showed smoke billowing from the plane and emergency exits open from the plane's fuselage as frightened passengers scampered to safety. A massive, gaping hole blackened by fire stretched along much of the plane's top.
"We're lucky we have this many survivors," Lee said.
It was the first fatal crash of a commercial airline in the U.S. since February 2009.
The flight, which originated in Shanghai China before stopping in Seoul en route to San Francisco, was carrying 61 U.S. citizens, 77 South Koreans and 141 Chinese.
Early Sunday, South Korea's Ministry of Land, Infrastructure and Transport identified the two pilots flying the jetliner at the time of the crash as Lee Jeong Min and Lee Gang Guk. The ministry said that four pilots were on board and rotated in two-person shifts during the 10-hour flight from Seoul. 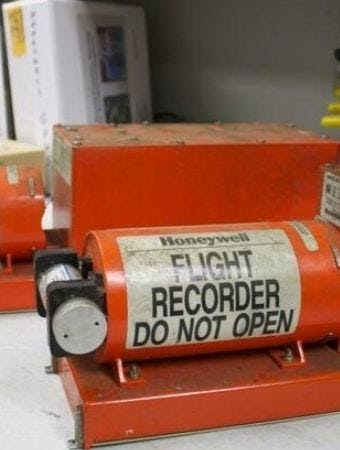 These black boxes recovered after the crash of Asiana Airline Flight 214 in San Francisco were transported to Washington, D.C., Sunday for analysis.(Photo: NTSB)
A San Francisco airport spokesman said that a component of the facility's instrument landing system that tracks the glide path of incoming airplanes was not working on Saturday, Reuters reported.
The computerized system, known as Glide Path, calculates a plane's path of descent and sends the information to pilots in real time.
Reuters said a notice on the Federal Aviation Administration website showed that the airport had turned off the system for almost the entire summer on the runway where the flight crashed.
Reuter noted that pilots and air safety experts say the technology is far from essential for a safe landing in good weather.
Vedpal Singh, who was sitting in the middle of the aircraft and survived the crash with his family, said there was no warning from the pilot or any crewmembers before the plane touched down hard and he heard a loud sound.
"We knew something was horrible wrong," said Singh, who suffered a fractured collarbone and had his arm in a sling. "It's miraculous we survived."
One passenger, Benjamin Levy, 39, said it looked to him as though the plane was flying too low and too close to the bay as it approached the runway. Levy, who was sitting in an emergency exit row, said he felt the pilot try to lift the jet up before it crashed, and thinks the maneuver might have saved some lives.
"Everybody was screaming. I was trying to usher them out," he recalled of the first seconds after the landing. "I said, 'Stay calm, stop screaming, help each other out, don't push.' "
After the initial impact, the plane's tail section was ripped off, coming to rest hundreds of feet from the main body of the aircraft, which burst into flames.
Hersman declined comment on whether pilot error caused the crash. "We have not determined what the focus of this investigation is yet,'' she said Saturday. "We will be looking at everything. Everything is on the table at this point.''
The investigators will work with the FAA, the aircraft's manufacturer Boeing and Korea's Air and Accident Investigation Board, Hersman said. Analysts in Washington, D.C., will examine air-traffic control records, weather and aircraft maintenance issues, she said. Investigators on site will examine the aircraft, the cockpit data recorders and the scene.
Samsung executive David Eun, who was aboard the aircraft, was among the first to tweet photos and word of passengers. "Fire and rescue people all over the place. They're evacuating the injured. Haven't felt this way since 9/11.''
Asiana Airlines said on its Twitter account, "Our thoughts and prayers are with all the passengers, and flight crew on the flight. We hope to provide you with further info asap... We are currently investigating and will update with news as soon as possible.''
Boeing said in a tweet from its corporate account: "Our thoughts are with everyone affected by today's incident at SFO. We stand ready to assist the NTSB.''
Saturday's crash landing was the first fatal accident involving a major commercial carrier in the U.S. since November 2001, when a American Airlines flight to the Dominican Republic crashed on takeoff in Queens, N.Y., killing all 260 people on board. The last fatal accident involving a commercial flight in the U.S. was Colgan Air Flight 3407, which crashed near Buffalo, killing 50 in 2009.
Welch reported from Los Angeles and Stanglin from McLean, Va. Contributing: Calum MacLeod in Beijing, Nancy Blair and Scott Martin in San Francisco, Liz Szabo, Gary Strauss, Donna Leinwand Leger, Bart Jansen, Ben Mutzabaugh, Nancy Trejos and Nancy Blair, USA TODAY; Associated Press 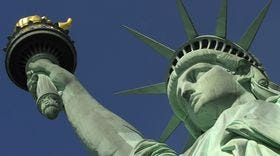 She's back: Lady Liberty by the numbers | USA NOW video

Posted by firesprinklers at 6:25 PM