By Francisco Alvarado, Mark Berman and Sandhya SomashekharSeptember 5 at 7:59 PM

Play Video 2:22
Hurricane Irma takes aim at Florida
Capital Weather Gang's Jason Samenow tells us what to expect from Hurricane Irma on Tuesday, Sept. 5. (Monica Akhtar/The Washington Post)
KEY WEST, Fla. — Another monster storm is hurtling closer to the United States, this time threatening Florida, where officials announced mandatory evacuations Tuesday in advance of what forecasters say could be the most powerful hurricane to strike the Atlantic coast in more than a decade.
Even as millions across Texas picked up the pieces after Hurricane Harvey, which battered that region with record-setting rain last week and was blamed for at least 60 deaths, Hurricane Irma gathered strength in the ocean, registering as a Category 5 with winds in excess of 180 miles per hour.
Concern centered particularly on the Florida Keys, a chain of islands at the southern tip of the state that is a tourist hot spot and home to more than 80,000 residents. It is in the direct path of the storm as currently forecast, leading local officials there to announce that the area would be under mandatory evacuation orders beginning Wednesday.
Play Video 0:36
Florida governor urges residents to heed evacuation orders
On Sept. 5, Gov. Rick Scott (R) urged those in areas subject to evacuation orders to leave ahead of Hurricane Irma. (Reuters)
Fear also spread north into Miami-Dade, the state’s most populous county with 2.7 million residents. Though the storm’s exact trajectory was still unknown, Miami-Dade Mayor Carlos A. Gimenez urged residents to stock up on food and water and warned that evacuation orders could follow in some areas. The county already planned to start evacuating those with special needs on Wednesday.
“This hurricane is far too powerful, poses far too great a threat, for us to delay actions any further,” Gimenez said at a news briefing Tuesday afternoon. “I would rather inconvenience our residents on this occasion than suffer any unnecessary loss of life if in fact we are hit by Hurricane Irma. It is still too early to know if we will take a direct hit.”
[Hurricane Irma is getting stronger and could impact the U.S., forecasters warn]
Forecasters on Tuesday called Irma one of the strongest hurricanes ever recorded in the Atlantic. The National Hurricane Center warned of “large and destructive waves” along the coasts of Haiti, the Dominican Republic and the Bahamas, while also saying that flooding could drench parts of Puerto Rico and the British and U.S. Virgin Islands. Puerto Rico’s governor on Tuesday asked President Trump to declare a state of emergency ahead of the storm’s arrival.

The Caribbean and Florida prepare for record-breaking Hurricane Irma View Photos
The U.S. National Hurricane Center says that Hurricane Irma, a Category 5 storm, has winds of up to 185 mph as it approaches the Leeward Islands of the northeast Caribbean. The storm is wielding the most powerful winds ever recorded for a storm in the Atlantic Ocean. Miami-Dade County’s mayor says residents and visitors should be prepared to evacuate as the storm heads toward Florida.
“Hurricane Irma’s magnitude compares to no other weather system in the recorded history of Puerto Rico. … We have expended substantial resources in preparation for this disaster and without the assistance of the federal government, the local communities will be unable to recover effectively,” Ricardo Rosselló Nevares wrote in the letter.
On Tuesday evening, President Trump declared emergencies in Florida, the U.S. Virgin Islands and Puerto Rico due to Irma.
Computer models show the storm approaching the Florida Keys by the weekend and then turning sharply northward. Its path beyond that is more uncertain, with models showing that it could then track up either the west coast of Florida or the East Coast of the United States, or climb up the center of the peninsula. The storm could also churn into the Gulf of Mexico. But the hurricane’s size suggests that its effects could be felt far from its center — perhaps as far as 200 miles out — forecasters say.
In Key West on Tuesday afternoon, residents and tourists were on high alert, with officials already issuing an evacuation for all visitors beginning Wednesday morning. Hotels here are closing down, many businesses on Key West’s famed Duval Street were shuttered — with the exception of a few bars and restaurants — and many residents were streaming to the mainland by car on Route A1A.
Carolyn Boutte, 44, said she and her husband moved to a house in Key West four years ago from Gloucester, Mass., and they have never been through a hurricane threat like this. They were searching for gas on Tuesday so they could escape, but the first three stations already had run out of fuel and lines were long everywhere else. She finally ran into some luck — at a station where she had to wait 45 minutes for a fill.
“My husband and I are packing up the dog and our Harley Davidson,” said Boutte, a marine biologist. “Unless the hurricane changes paths, we are getting out of here in the next couple of days.”
Hurricane Irma promised to test once again the Trump administration’s ability to respond to a major natural disaster, just days after Hurricane Harvey pummeled Texas, leaving record damage in its wake. William “Brock” Long, administrator of the Federal Emergency Management Agency, said that incident management assistance personnel already are on the ground in vulnerable areas.
“Just like in Texas, the response to Irma is going to take all levels of government and the whole community,” Long said in a statement. “This has the potential to be a catastrophic storm.” 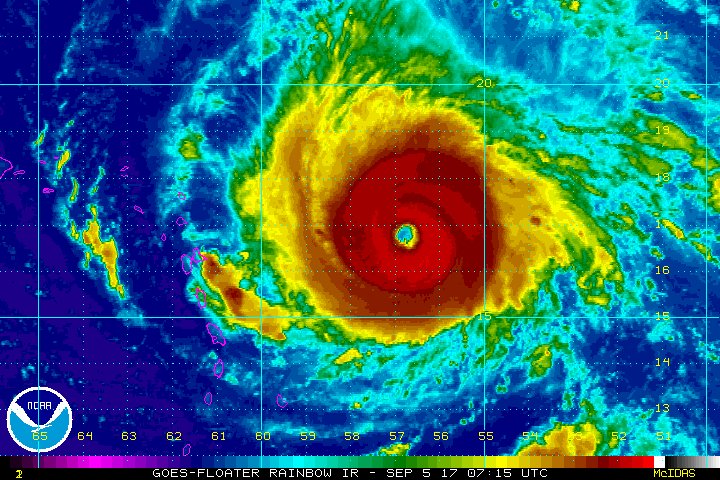 NHC Atlantic Ops
✔@NHC_Atlantic
#Irma is the strongest #hurricane in the Atlantic basin outside of the Caribbean Sea & Gulf of Mexico in NHC records http://hurricanes.gov

That potential appeared to be sinking in particularly in the Florida Keys, where gas stations reported low fuel stocks and grocery stores ran out of bottled water. Residents and business owners boarded up windows and hauled boats out of the water. Tourists and residents had already begun crowding up the single highway that snakes through the 120-mile island chain and into the Florida mainland.
Some planned to ride out the storm, despite the dire warnings. Monroe County commissioner Sylvia Murphy, who has lived on the Florida Keys since 1954, said she and a few guests would hunker down in her home, which sits about 12 feet above sea level atop the ridge that runs along the islands. Her house has a new metal roof, she said, and is surrounded by trees, which help block the wind gusts.
“The water won’t get me,” she said by phone Tuesday.
Others in the state, meanwhile, planned to play it safe.
School districts in the large counties of southern Florida all announced they were canceling classes later this week, including Broward, Miami-Dade and Palm Beach, three of the nation’s largest with a combined enrollment of more than 800,000 students. The NFL said the Miami Dolphins season opener scheduled for Sunday afternoon would not be played in South Florida as planned, and would move either to a neutral location the same day or would be rescheduled for later in the season.
Florida Gov. Rick Scott (R), who has declared a statewide emergency, wrote to Trump on Tuesday asking him to declare a pre-landfall emergency in Florida, warning that Irma could require large-scale evacuations. He has activated 100 members of the Florida National Guard and said he has directed all 7,000 members to report for duty on Friday.
[Eye of a monster: Terrifying images of Hurricane Irma, 2017’s strongest storm on Earth]
Scott ordered Florida transportation officials to suspend tolls across the state as of 5 p.m. Tuesday, which could help lessen congestion on the crowded arteries drivers will use to escape the storm’s potential path.
The uncertainty of Irma’s track and the geography of the Florida peninsula have combined to create an unusually broad, essentially statewide sense of emergency. Most of Florida’s population lives close to the coast, and Irma could potentially ride up either side or track further west into the Gulf of Mexico and endanger the state’s panhandle.
South Florida’s three big counties — Dade, Broward and Palm Beach — last year surpassed 6 million in population for the first time, and routes out of the area are impeded by the Everglades and vast swamps just inland of the inhabited regions. The main routes north are Interstate 95 and the Florida Turnpike. The main route west is Interstate 75 — the so-called “Alligator Alley” — but that takes South Florida’s residents to the imperiled southwest coast of the state. If the storm does track up the state’s spine, as Scott noted, that could make evacuations extremely complex.
The last major hurricane — registering as a Category 3 storm or stronger — to make landfall in Florida was Hurricane Wilma in October 2005. Wilma also was the last major hurricane to make landfall in the United States until Harvey struck Texas late last month.
While the hurricane center said Irma’s intensity could fluctuate, it is expected to remain a Category 4 or 5 storm during coming days. The hurricane center was blunt about Irma’s potential impact, calling the storm “extremely dangerous” and “potentially catastrophic.”
“Everyone should continue to monitor, check supplies, and be ready to implement action plan,” the National Weather Service in Miami posted Tuesday morning on Twitter. 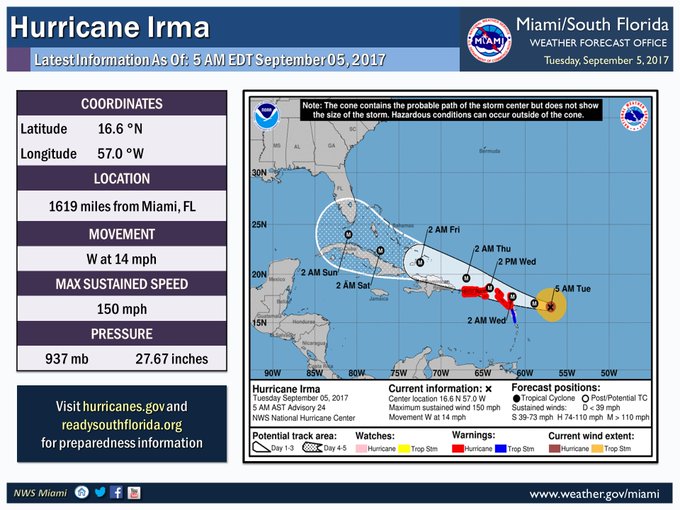 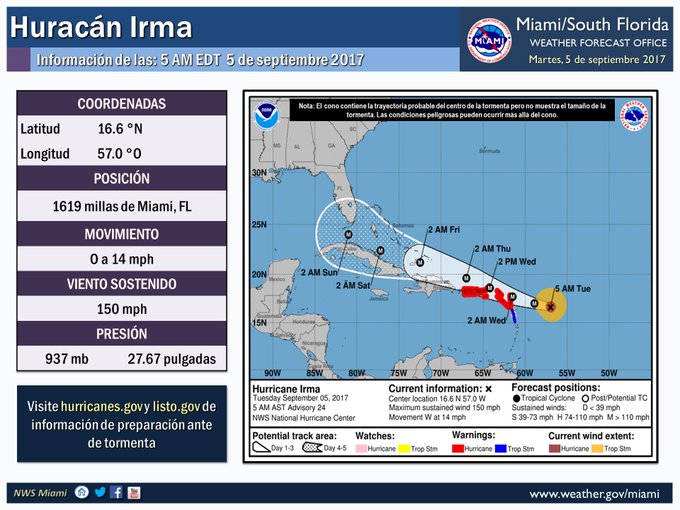 NWS Miami
✔@NWSMiami
5 AM: Irma has max sustained winds 150 mph. Everyone should continue to monitor, check supplies, and be ready to implement action plan #FLwx

The University of Miami said Tuesday it was canceling classes beginning on Wednesday and through the end of the week at two of its campuses, including its main property in Coral Gables, south of downtown Miami.
Miami city officials urged residents who live in buildings next to construction cranes to evacuate in advance of the hurricane, saying that the cranes are designed to withstand winds up to 145 miles per hour, not a Category 5 storm. “The arm’s counterbalance is very heavy and poses a potential danger if the crane collapses,” the city said in a statement, noting that the danger is greatest for people living in high-rises.
Must Reads
5 stories you can't afford to miss, every Saturday.
Play Video 1:55
In southeast Texas, detours and dangers for drivers after Harvey
The historic Harvey rains are gone. But it’s still hard to get from here to there on roads and rails in Beaumont and Port Arthur, Tex. (Lee Powell/The Washington Post)
The warnings in Florida arrive not long after the state marked the 25th anniversary of Hurricane Andrew’s devastating landfall there, and as residents — like many others nationwide — have spent recent days glued to news reports documenting Harvey’s mammoth impact in Texas.
If Irma does make landfall as a Category 4 storm or stronger so close after Harvey’s impact on the Gulf Coast, it will be the first time on record that two storms of that strength hit the United States during the same hurricane season.
Somashekhar and Berman reported from Washington. Joel Achenbach, Moriah Balingit, Angela Fritz and Jason Samenow in Washington contributed to this story, which has been updated since it was first published at 8:47 a.m.
Read more:
Harvey aftermath: Storm flooding destroyed hundreds of thousands of cars in a city that relies heavily on them
1.3K


Comments
Posted by firesprinklers at 5:45 PM