On Day 2 of Canyon fire in Corona, winds will play key role in battling the blaze


By BEATRIZ E. VALENZUELA | bvalenzuela@scng.com and STEPHEN RAMIREZ | stramirez@scng.com
PUBLISHED: September 26, 2017 at 7:52 am | UPDATED: September 26, 2017 at 4:13 pm
Update: Flares used on 91 Freeway when Canyon fire began, Caltrans says, adding that wind conditions were considered
The eastbound 91 Freeway toll lanes will be free Tuesday evening in an attempt to ease traffic stalled by the Canyon fire in Corona, transportation authorities said.
The 2,000-acre fire has prompted the closure of the right lane of the eastbound freeway between Coal Canyon and Green River Road, as well as the closure of the eastbound Green River offramp.
The lanes will remain free until 9 p.m. Tuesday.
On Tuesday, the key to the battle were the winds – which shifted on Monday, causing a headache for firefighters.
Meanwhile, Riverside County declared an emergency, Corona residents were allowed into their homes to gather belongings, the 91 Freeway eastbound Green River Road offramp was closed Tuesday morning and several more schools canceled classes.
And amid the chaos, a Corona motorcycle officer received minor injuries after he was struck by a vehicle that skirted one of the barricades. The driver was arrested on suspicion of felony hit-and-run.

1 of 31
An air tanker makes a fire retardant drop during day 2 of the Canyon fire in Corona on Tuesday, Sept. 26, 2017. (Stan Lim, The Press-Enterprise/SCNG)

Winds were pushing flames toward Irvine Lake, just north of Irvine in Orange County, but firefighters said they’d keep an eye on the breeze, in case it shifted.
The lake was closed as firefighters used it as staging ground.
“Firefighting agencies will have to adjust their tactics when the wind changes direction,” said National Weather Service Meteorologist  Philip Gonsalzes. “That’s a factor they are going to have to account for.”
Both Corona and Anaheim expect a high of 88 degrees on Tuesday.
The relative humidity will remain low at about 10 percent and winds were expected to be about 10 mph, with gusts of 20 mph.
Winds will die down Tuesday night and into Wednesday and the humidity will increase to about 40 percent, but are not expected to make much of a difference in the fire’s progress, Gonsalzes said.
Temperatures on Wednesday will again be around 90 degrees, westerly winds will range from 10 to 20 mph and conditions will remain dry. There is no forecast of rain in the foreseeable future, Gonsalzes said.
An advisory released Tuesday by the South Coast Air Quality Management District warned that smoke could reach into parts of southern Orange County and into Lake Elsinore in southwest Riverside County.
“Everyone worries about the flames, but smoke can impact you even if you’re miles away from the fire,” Dr. Cameron Kaiser, Riverside County public health officer, said in a separate news release.
Both organizations advised residents, among other things, to avoid exertion – both indoors and outdoors.

1 of 31
A firefighter with the Orange County Fire Authority seeks shelter under a patio as the Canyon Fire races towards a home in Corona Monday night September 25, 2017. (Will Lester-Inland Valley Daily Bulletin/SCNG)

On Tuesday morning, the CHP had closed eastbound 91 Freeway off-ramp at Green River Road until further updates.
Also, as of Tuesday morning, the following schools were closed: Adams, Coronita, Eisenhower, Franklin and Prado View elementary schools, Citrus Hills intermediate and Cesar Chavez Academy.
All other district schools will be open, including Corona High School, but will be operating on an “inclement weather schedule” due to poor air quality, intended to keep students inside, according to a social media post by the school district.
Updates will be posted to the district’s website and Facebook page.
As of 10:45 a.m., 900 personnel were on scene from Orange County Fire Authority, Anaheim Fire and Rescue, Cal Fire, the Corona Fire Department, U.S. Forest Service and multiple jurisdictions said Orange County Fire Authority Capt. Steve Concialdi.
Nine helicopters and nine aircraft were involved, Concialdi said.
Also, the Riverside County Board of Supervisors issued an emergency declaration, which is the first step toward accessing state funds for damage repair through the California Disaster Assistance Act.
Related:
This map shows where the Canyon Fire is burning in Corona, what’s closed
More schools announce closure Tuesday morning
CHP closes 91 Freeway off-ramp in Corona due to Canyon fire
Canyon fire prompts smoke advisory for parts of Orange, Riverside counties
Day 1: One structure destroyed, big rig burned in Corona as Canyon Fire grows to 2,000 acres

‘Part of the community’

Several organizations stepped up to help refugees: Ralphs, the Islamic Society of Corona-Norco and U-Haul.
The Ralphs on Green River Road stepped up to help evacuees, providing them with coffee, snacks, fruits and pastries and a place to charge their cellphones.
“Honestly, that’s why we do this,” said Assistant Manager Michael Soria. “We do this because we’re part of the community.”
Resident Judy Harris said the trip to Ralphs gave her the chance to mingle with other evacuees.
“I’ve lived here 27 years and never met my neighbors,” Harris said. “It took something like this to meet my neighbors.”
Harris adds: “And it was my birthday. I celebrated it at Ralphs. Now, I just want a cupcake with a candle on it.”
The Islamic Society of Corona-Norco lodged evacuees who had nowhere else to go.
“That was the minimum we could do,” said Ahsan Baseer, president of the Islamic Society of Corona-Norco. “It’s our duty to make sure the community and our neighbors are safe.”
While no evacuees were at the center Tuesday afternoon, any evacuee who needed shelter was still welcome. To contact the mosque, evacuees may call 951-736-8155.
And U-Haul offered residents 30 days of free storage.
“I was watching the news (Tuesday) morning and seeing all the people who had to evacuate their homes,” said Sylvia Satchell, president of the U-Haul Company of Riverside. “I remember my situation last year and how that affected me. I wanted to help.

Firefighters were allowing residents to briefly stop at their homes, fearing the winds could shift and return flames to their doorstep. — but only with ID and only by foot.
Jamie Bishara was returning to pick up medication.
“It was very scary,” said Bishara, who was staying with her daughter, also a Corona resident. “Like we were in the middle. And the fire was all around us.
“Thank god we’re safe,” she continued. “And thank god to everybody who helped.” 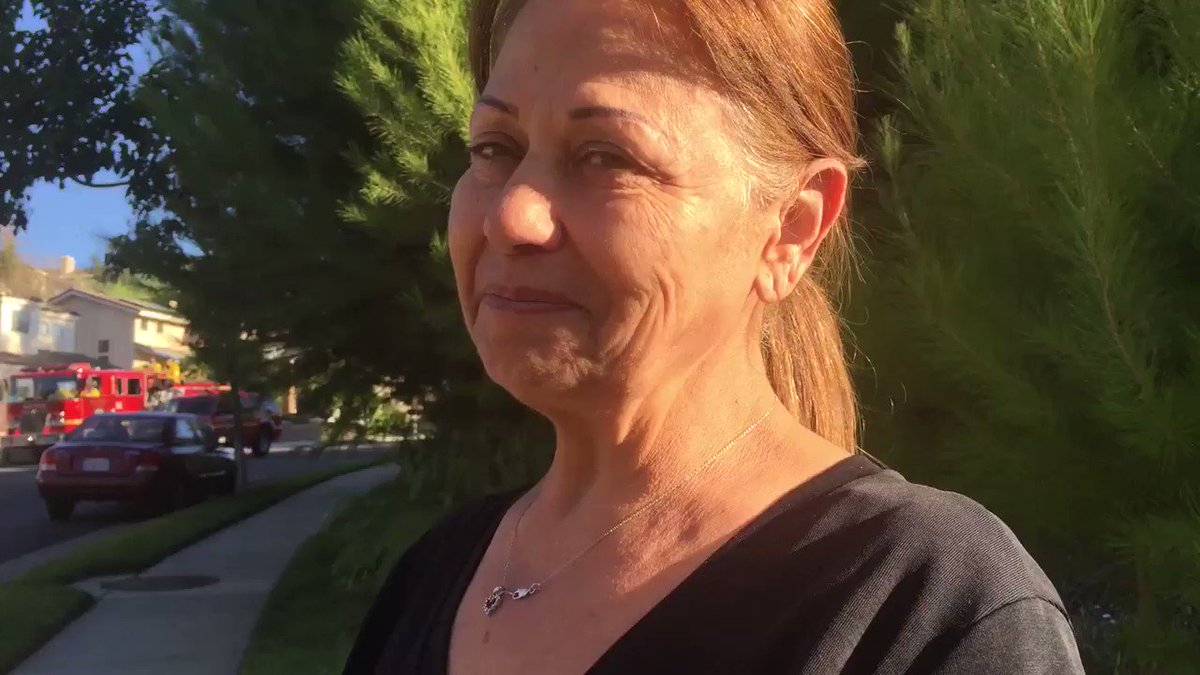 
Mita Mizan, who lives on Hidden Hills Way just south of Green River Road, said she and her family had returned about 11 p.m. Monday.
“It was very close and very scary. I’ve never seen a fire like this in this area,” she said.
Mizan and her family — including her husband, mother-in-law and her two sons — fled their home around 8 p.m. 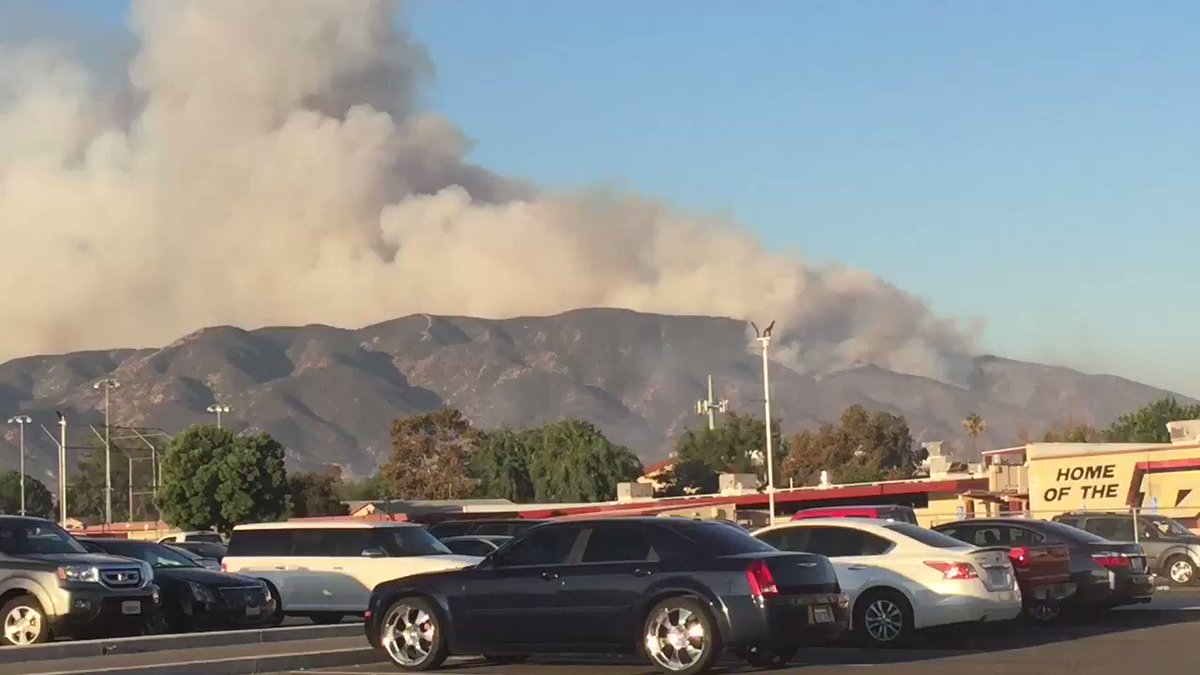 “There were police everywhere and firefighters,” she said Tuesday morning, wrapped in a colorful shawl as she readied to take her 16-year-old for school. “They said it was mandatory we had to  leave and my sons wanted to leave so we did.”
Mizan said it was hard to leave her home of nearly 20 years but the heat from the flames that scorched the back yard of her neighbor’s home was enough to get her and her loved ones out the door with only their most important documents and possessions.
“I could see the flames from the 60 Freeway yesterday,” said Ahsan Baseer, of Corona. “It was very scary.”
Baseer lives near Green River Road and although his neighborhood wasn’t evacuated, he said homes a few blocks away were.
Staff writer Scott Schwebke contributed to this report.

Posted by firesprinklers at 5:07 PM