Only about 10 commercial flights leaving to the U.S. mainland a day, down from 176 daily flights normally

By
José de Córdoba and
Arian Campo-Flores
Updated Sept. 25, 2017 9:33 p.m. ET
8 COMMENTS
SAN JUAN, Puerto Rico—After Hurricane Maria knocked out radar systems and power, the U.S. territory’s main airport is struggling to get thousands of stranded passengers off the island.
Agustín Arellano, chief executive of Aerostar Airport Holdings LLC, which operates the airport, said only about 2,000 passengers are flying out every day despite standby lists that are in the tens of thousands. That is down from an average of 15,000 passengers departing daily prior to Maria.
“Our limitations are airspace, and we are missing radar,” he said. “We are trying to get radar and equipment to be able to have communication with Miami.”
The airport is relying on 21 generators to supply power to the control tower, tower radar, some terminal lighting, navigation equipment and the equipment necessary to screen baggage. There is no air conditioning, Mr. Arellano said, and only one food-and-beverage concession is operating.
The difficulty getting the airport up and running is emblematic of the difficulties across the island. Authorities continue to rescue people isolated after the storm cut across the island, flattening forests, throwing down power lines, destroying roofs, and causing small streams to turn into raging rivers that flooded nearby towns. Gov. Ricardo Rosselló said there have been more than 5,500 rescues.

On Monday, Coast Guard leadership, federal officials and congressional lawmakers met in San Juan with Mr. Rosselló who carried an urgent message of need. “What Puerto Rico is experiencing after Hurricane Maria is an unprecedented disaster. The devastation is vast,” he said. “This is a humanitarian disaster involving 3.4 million U.S. citizens.”
Sen. Marco Rubio said Monday the logistics of getting supplies, equipment and personnel to the airport and ports is challenging. “I think there’s a lot of great needs,” he said. “One is being able to get into the island things needed for rapid recuperation.”
At San Juan’s airport, military and aid flights are arriving daily with critical supplies from power generators to drinking water. But because of those arrivals, only about 10 commercial flights are leaving to the U.S. mainland a day—down from 176 daily flights normally, according to Mr. Arellano. And only five airlines are flying out of San Juan, down from 31 airlines that used the airport before the storm. 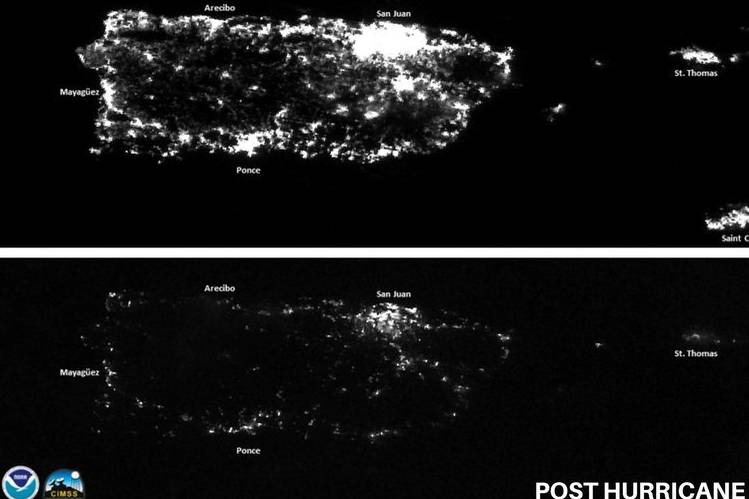 Widespread power outages in Puerto Rico are visible from space in this combination photo released by NOAA showing the island at night on July 24, 2014, top, and Sept. 24, 2017, bottom. PHOTO: NOAA/REUTERS
American Airlines Group Inc. resumed limited service to San Juan on Friday, when it sent three flights, all carrying relief supplies like cots, tarps and generators. The airline wasn’t able to send any flights on Saturday, but had one San Juan-bound flight and two return flights on Sunday, said Ross Feinstein, a spokesman for the airline. On Monday, American operated one flight to San Juan and back.
“We want to resume more operations and get more flights in there, but it’s a very challenging environment,” Mr. Feinstein said, adding that a typical day for the airline involves roughly 20 flights departing to, and returning from, San Juan.
Three of four radars used by air-traffic controllers, as well as telecommunications systems, sustained damage, Mr. Arellano said. So planes heading to the island can only engage in radio contact with air-traffic controllers when they are within 30 miles, he said.
That means airplanes need to be spaced 100 miles apart—compared with 5 miles apart during normal operations—along dedicated air corridors at specified altitudes for safety reasons.
The Federal Aviation Administration is working to restore radars, navigational aids and other equipment damaged during Hurricane Maria, according to a news release by the agency Monday. Luis Muñoz Marín International Airport handled nearly 100 total arrivals and departures on Sunday, including military and relief operations.
The FAA is transporting replacement systems to the Caribbean by air and sea to restore radar, navigational and communication services, the agency said.
Technicians were trying Monday to reach another long-range radar site at Pico del Este, located atop a mountain in a national park in Puerto Rico, the FAA said. But the final 2 miles to the site wind through rain forest that is impassable, so workers were using chain saws to clear a path for equipment. 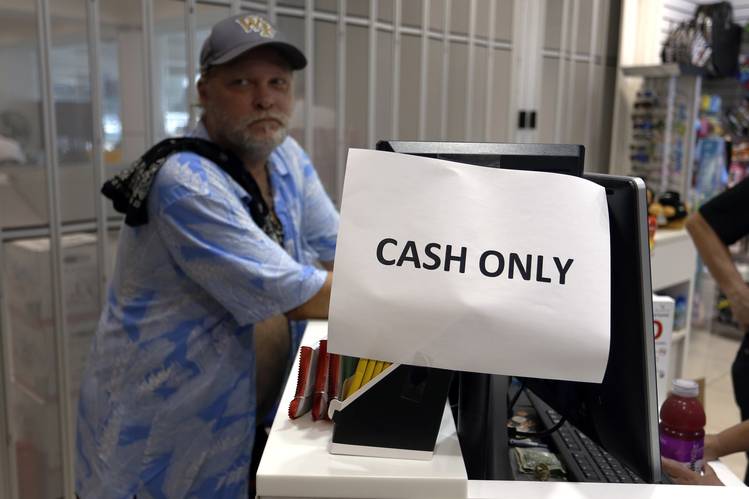 A worker at Luis Muñoz Marín International Airport stands next to a till that was unable to process credit card transactions on Monday. The airport’s operator said it expects the process of restoring to full service to take weeks. PHOTO: THAIS LLORCA/REX/EPA/SHUTTERSTOCK
In the airport’s passenger terminal, the situation was chaotic. Flights were booked, and rebooked, and rebooked again—only to be canceled. Would-be passengers waited in long lines, many in their own chairs, to try to get on flights that had brought in humanitarian aid.
“I’m here, and it looks as if I won’t be able to get on,” said Joel Rosas after waiting in line Monday. He said he planned to sleep at the airport to be first in line Tuesday for a flight to the U.S.
At the American Airlines counter, José Manuel Teijido, who had been vacationing in Puerto Rico, stood in a long line. “My reservation is worthless,” said Mr. Teijido, who was worried that he would run out of hypertension medicine before being able to return home to Spain.
Delta Air Lines Inc. had one flight to San Juan Sunday and two Monday, said Michael Thomas, an airline spokesman. Because of the limited service, the airline has been using larger airplanes to accommodate more passengers, he said.
Mr. Arellano said it would take a long time for the airport to return to normal, but that he expects to see big improvements within the next two weeks.
He was pleased that the airport recovered Wi-Fi and cellphone use on Sunday night. And by Monday afternoon, screening equipment used by the Transportation Security Administration was back in operation, he said.
—Siobhan Hughes contributed to this article.
Write to José de Córdoba at jose.decordoba@wsj.com and Arian Campo-Flores at arian.campo-flores@wsj.com
Appeared in the September 26, 2017, print edition as 'Puerto Rico Airport Reels.'
Posted by firesprinklers at 7:44 PM