What just happened to Apple, explained Apple CEO Tim Cook. AP
The European Commission, the EU's executive arm, isordering Apple to pay $14.5 billion in taxes to Ireland. But Irelanddoesn't want the money, and Apple says it shouldn't have to pay. And the kind of tax breaks that the EU accuses Ireland of offering Apple are similar to the kind of deals common in, and legal in, the US.

This is what the EU says:
Apple Inc., which is based in California, set up two companies in Ireland: Apple Sales International and Apple Operations Europe. According to the European Commission, these companies had no employees or real offices but still realized large profits. Apple paid virtually no tax to Ireland, or to any country, on these profits because of a former law in Ireland. In the last year that the law was in effect, 2015, Apple Sales International paid just 0.005% tax, according to the commission. 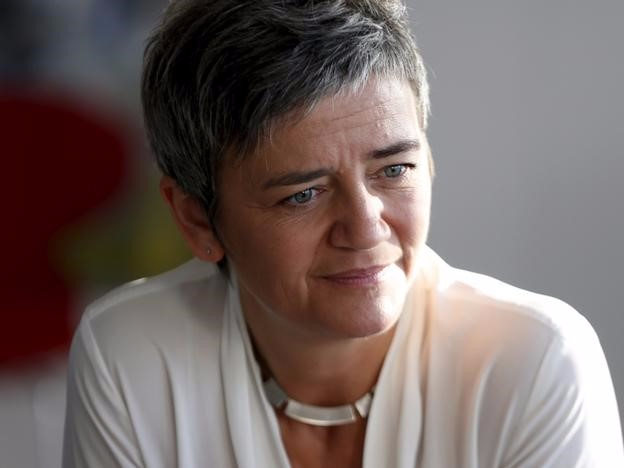 EU Competition Commissioner Margrethe Vestager.Thomson Reuters
The European Commission is led byMargrethe Vestager, a member of Denmark's social liberal party. The commission is not a tax authority; instead, its job is to maintain fairness between the EU member states. And that brings us to the most important part in this story: The commission says this law specifically favored Apple for special treatment.
When Apple sold iPhones, iPads, and Macs in an EU single-market nation, such as France, the commission said Apple would funnel the profits from France to Ireland and would not pay tax in either country. But this is not really about Apple's tax-avoidance strategies, which are infamous.
The European Commission's issue is really not with Apple but with Ireland.

How's this for a tricky balancing act?
EU leaders have no issue with different member nations charging different corporate-tax rates. That's why it's acceptable for Ireland to charge businesses a 12.5% income tax whereas France levies 33.3%. 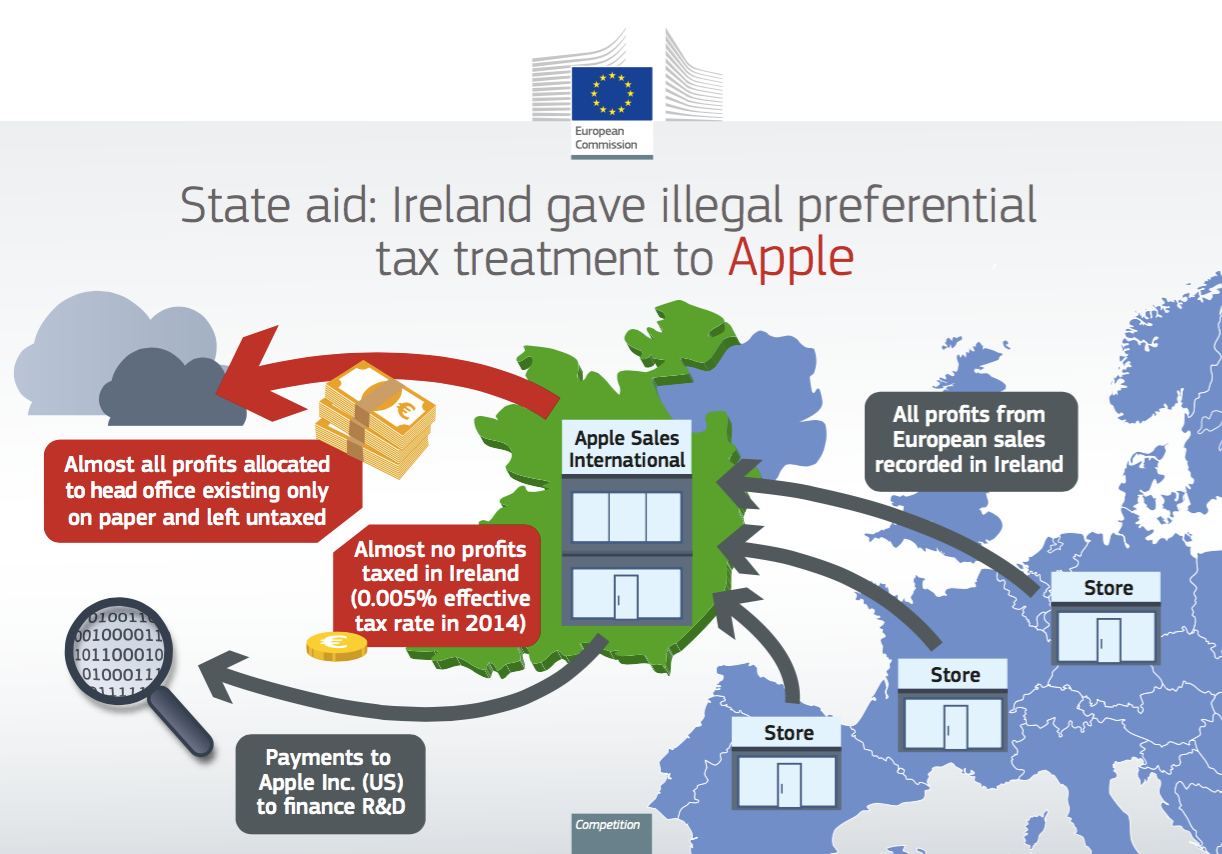 The European Commission released this infographic showing how Apple paid virtually no taxes through its Irish companies. European Commission
This is crucial because nations want to maintain autonomy over their fiscal policies. That's part of the ongoing power struggle between individual nations and the EU (remember Brexit?). What's not acceptable is what the EU calls "state aid." This is when a country offers something special that's seen as benefiting an individual company.
It can be even more basic. If France taxed companies in the north less than those in the south, that's generally state aid in the EU's view. It's the same with trying to get a German company to move to Denmark by abating property taxes for a new headquarters.
"The view is that not levying taxes that everyone else has to pay amounts to the same result as giving money to just one company," Philipp Werner, a partner in the law firm Jones Day's Brussels office who has represented multinational companies appealing state-aid decisions, told Business Insider.
If Apple had just paid the standard 12.5% income tax in Ireland, the country wouldn't have EU leaders upset in Brussels. Instead, the commission says Ireland gave Apple "selective tax treatment"starting in 1991, with the first of two tax rulings. In effect, Ireland signed off on a plan in which Apple would move money to a stateless "head office" with no meaningful activities.
"Therefore, only a small percentage of Apple Sales International's profits were taxed in Ireland, and the rest was taxed nowhere," the commissionsaid in a press release.
Ireland explicitly said this was fine by its standards. But the EU contends that this arrangement "gave Apple an undue advantage that is illegal under EU state aid rules."
"Apple entered into a deal with Ireland to not pay tax on all those profits," Edward Kleinbard, a professor of law and business at the USC Gould School of Law, told Business Insider. Instead, Apple paid "an arbitrarily small amount to Ireland in return for a vague promise to keep jobs in Ireland."
Apple and Ireland aren't the commission's first targets. There weresimilar rulings against the Starbucks' tax dealings in the Netherlands and a division of Fiat in Luxembourg.

Apple and Ireland have a different view 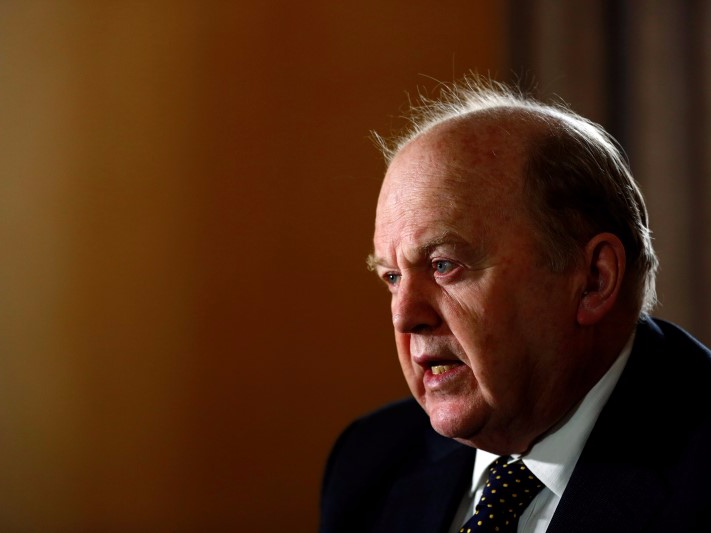 Irish Finance Minister Michael Noonan.Thomson Reuters
Apple was one of the first major tech companies to set up shop in Ireland. At the time, in 1980, Ireland was in bad economic shape. Unemployment was high, and many people left Ireland to try to find work in other countries.
Low corporate tax was one way Ireland improved its economy and attracted big companies, and Apple was one of the early companies to benefit.
Irish Finance Minister Michael Noonan has categorically rejected the notion that this was a special deal for Apple.
"The Irish Revenue don't do deals," Noonan told CNBC on August 30. "They issue opinions to clarify a tax situation for individual companies, but we never do deals." He continued to say that Apple doesn't owe any taxes to Ireland. "They may owe it elsewhere, but not to the Irish authorities."
To underscore the delicate relationship, Noonan accused the commission of meddling in the policies of sovereign governments. For its part, Apple CEO Tim Cook shot back, saying in an open letter that the European Commission "has launched an effort to rewrite Apple's history in Europe, ignore Ireland's tax laws and upend the international tax system in the process."
Both Ireland and Apple say the company has become a big part of the Irish economy, with 6,000 workers there. And Cook also objected to the ruling being retroactive. Under EU rules, it can compel a country to collect taxes going back 10 years from the first date it asked for information.

Here's one of the ironies: The EU is, in effect, ordering Ireland to collect a lot of money. Most, if not all, of the $14.5 billion would go to Ireland and could be used to pay down debts. But Ireland is not interested.
"Although they get a huge amount of money back, they also want to fight it," said Werner at Jones Day. "They're not only thinking about Apple — they're thinking a whole lot of other companies established in Ireland."
Losing this battle will hurt Ireland's credibility as an inexpensive place to do business, and a place where tax laws are clear and settled.

Why is the US fighting this? US Treasury Secretary Jacob Lew.REUTERS/Gleb Garanich
Another irony: You might think the US would applaud any effort to collect tax from US-based multinationals using Irish subsidiaries to pay less, or zero, tax. But there are a few reasonsthe US Treasury department is vehemently against this EU ruling and other pending cases targeting companies, such as Amazon.
One is simple: It wants to protect US businesses, and the Treasury says they're being unfairly targeted by this EU crackdown.
Second, the US wants to preserve tax revenue it hopes one day will come its way.
Companies like Apple say US taxes are too high, so they keep foreign earnings overseas. But Congress has long debated ways to get multinational American companies to repatriate some of that cash. The Treasury Department says if the commission wins this case, US companies could use these taxes paid in Europe to offset US taxes. That, it says, "would effectively constitute a transfer of revenue to the EU from the US government and its taxpayers," according to a Treasury white paper.

What about other European countries?

In his letter, though, Cook may have stepped into another debate over its aggressive tax avoidance by saying, " A company’s profits should be taxed in the country where the value is created." This is a different issue.
If Apple made money in France but realized those profits in Ireland, it is up to France, not the EU, to complain and try to get some of that money back.
The whole reason Apple's European operations are in Ireland, after all, are for its tax advantages. The question is just whether Apple received illegal special treatment.

Wait, don't these tax breaks happen in the US all the time? Tesla's Gigafactory, in Nevada, received the kind of tax breaks that would be illegal in the EU.YouTube/Above Reno
One reason all this might seem odd to Americans is that the "special treatment" Ireland is accused of giving Apple is similar to incentives American states give companies all the timelegally.
Massachusetts, for instance, put together$145 million in incentives to persuade General Electric to move from suburban Connecticut to Boston.
Never mind that some research suggests these sweetheart deals oftendon't pay off. Politicians can't stop offering them.
When Tesla said publicly it wanted to build a Gigafactory to produce batteries, states like California, Nex Mexico, and Nevada stumbled over themselves to offer the most generous tax breaks. In the end, Nevada agreed to $1.2 billion in tax incentives to win the deal. If these deals were issued by France to attract a company based in Denmark, it would be illegal under EU rules.

Some American companies have gone further than Apple to take advantage of Irish tax breaks. Pharmaceutical firm Allergan has acquired or formed Irish subsidiaries and then "inverted," or transferred its legal headquarters to Ireland. Even if its headquarters were in the US, it is effectively an Irish company.
"Inversions are separate but related," Kleinbard said. Companies that invert "take advantage of an easily manipulated definition of what is a US company."
Nothing in the European Commission ruling affects inversions. It's up to US authorities to crack down if they want to stop the practice. Congress, for instance, could change tax law to consider a company American if its leadership and most of its workers are based in the US.

Apple, the most profitable company in the world, and Ireland, which has some of the lowest corporate taxes, made easy targets for the European Commission. But it's clearly not done yet. It's targeting McDonald's for allegedly paying no tax on its earnings in Luxembourg. The antitrust regulators are also looking into Amazon.
Ireland, however, will almost surely appeal the ruling against its dealings with Apple. It has a lot more on the line than $14.5 billion.

SEE ALSO: What you need to know about Margrethe Vestager, the politician going after Apple

NOW WATCH: The tax strategy that is about to cost Apple billions

Posted by firesprinklers at 9:30 PM