By Letitia Stein | TAMPA, FLA.
A tropical storm developing in the Gulf of Mexico could produce near hurricane-force winds by the time it makes landfall in Florida, the National Hurricane Center said on Wednesday.
Tropical Storm Hermine, with gusting winds of 40 miles per hour (65 km), was forecast to strengthen before reaching Florida's north-central Gulf Coast on Thursday afternoon, and then sweeping across the northern part of the state with diminished winds and later northeast along the Atlantic Coast.
Storm preparations were also under way on Hawaii, which was opening shelters and closing offices, schools and roadways on Wednesday to prepare for Hurricane Madeline, which is expected to hit the southern part of the state’s Big Island hardest.

inRead invented by Tead
Florida's governor declared an emergency on Wednesday ahead of the brewing storm, which could bring life-threatening flooding. 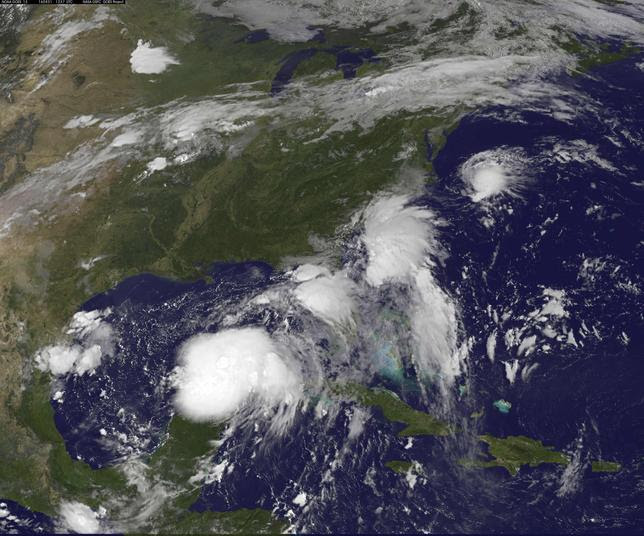 Two Tropical Depressions are shown over the Gulf of Mexico and along the Carolina coast of the United States in this GOES East satellite image captured August 31, 2016. NOAA/Handout via REUTERS
Heavy rains were already pounding parts the state on Wednesday. As much as 15 inches (40 cm) could fall from central to northern Florida, the National Hurricane Center in Miami said, warning of storm surges and "life-threatening inundation." Many school districts along the Gulf Coast canceled after-school activities and ordered students to stay home on Thursday.
On its current path, the system would dump as much as 10 inches of rain (25 cm) on coastal areas of Georgia, which was under a tropical storm watch, and the Carolinas.
Lori Hebert, 40, woke up on Wednesday to flood waters seeping into her house in the Tampa Bay region. Catfish came onto her driveway as the street flooded outside her home in Gulfport, a small waterfront city.
"We haven't gotten the main storm yet," she said, loading a dozen orange sandbags into her van.
U.S. oil and gas producers in the eastern parts of the Gulf of Mexico have removed workers from 10 offshore platforms, moved drilling rigs and shut some output because of the storm.
On Hawaii's Big Island, residents were warned that Madeline, a Category 1 hurricane with sustained winds of about 75 mph (120 kph), could dump as much as 15 inches (40 cm) of rain in isolated areas.

Madeline was expected to weaken to a tropical storm later on Wednesday, but another brewing hurricane also could affect the state over the weekend.
Governor David Ige signed an emergency proclamation that runs through Sept. 9, freeing up state resources.
Island residents were bracing themselves for a week of possible power outages and food rationing because of delays of the cargo ships that bring all of their essential supplies, said Galen Yoshimoto, Hawaii Emergency Management Agency spokesman.
“On an island, we can't roll things from one island to another,” he said.


Posted by firesprinklers at 2:25 PM