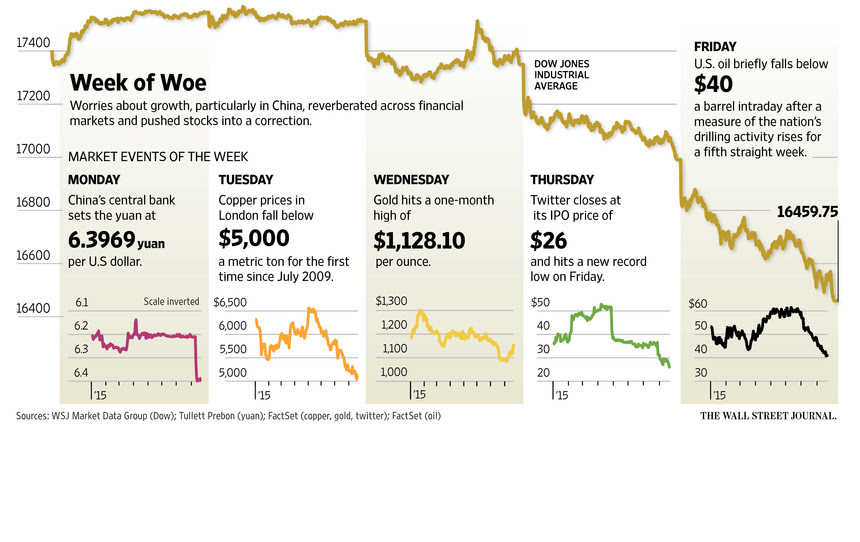 ENLARGE
By
E.S. BROWNING
Aug. 21, 2015 7:34 p.m. ET
7 COMMENTS
U.S. stocks suffered their worst losses in four years at the end of a bruising week, as growing concern about China’s economy pushed shares in the U.S. and Europe into what money managers call a correction.
The Dow Jones Industrial Average finished the day down 10.1% from its May record, crossing the 10% threshold that typically defines a correction. The U.S. blue-chip stock average hadn’t had a correction since 2011, when it plunged after Standard & Poor’s downgraded its rating of U.S. sovereign debt.
On Friday, the Dow endured its fourth consecutive day of declines, losing 530.94 points, or 3.1%, to finish at 16459.75. Other U.S. indexes similarly fell sharply, with the Dow, the S&P 500 and the Nasdaq Composite Index all posting their worst one-day percentage declines since 2011, although the S&P 500 and the Nasdaq weren’t down 10% from their highs. Benchmark indexes in London and Frankfurt recorded their largest two-week percentage declines since 2011, leaving both of those markets well into correction territory.
Four years ago, intervention by the world’s central banks prevented recession and kept many stock benchmarks from slipping into a bear market, which is commonly defined as a decline of 20% or more. Many money managers and economists say they expect central banks to again prevent deeper troubles through efforts they already have under way. But while market watchers remain optimistic for the longer term, they worry stocks could face a rocky path in the near future.
Other notable markers across financial markets Friday:
Stock indexes in France, Spain, Belgium and the Netherlands fell into correction territory.
Of the 502 U.S. stocks in the S&P 500 index, 492 fell, leaving 328 in correction territory. Of those losers, 147 have fallen into bear-market territory.
Shares of Apple Inc. entered a bear market, down 20% from their recent high.
The CBOE Volatility Index, known as the market’s “fear gauge,” more than doubled in the past week, its biggest weekly increase on record.
Allen Sinai, chief global economist at Decision Economics Inc., told clients this past week he is bullish on stocks in the medium and long term because he expects continuing economic expansion world-wide. But he said he is waving a “yellow flag of caution” for the short term.

“Tactically, I would not commit new money to stocks at this time, and I would raise cash,” Mr. Sinai said in an interview. “To get out of stocks entirely would be a big mistake, but I would lighten up,” he said, although he added that he would be surprised to see U.S. stocks fall more than 15% in all.
The worries were evident across the globe, both Friday and in the days before.
Stocks fell 5.3% for the week in Tokyo, 12% in Shanghai, 5.5% in London and 7.8% in Frankfurt. The S&P 500 fell 3.2% Friday and 5.8% on the week, while the Nasdaq Composite Index declined 3.5% Friday and 6.8% for the week. The S&P is 7.5% off its May record, still well short of a correction, but the Nasdaq is 9.8% off its July record.
Amid concerns Chinese demand for commodities will decline, New York oil futures fell 6.2% on the week to $40.45 a barrel, the lowest price since 2009. During intraday trading Friday, oil dipped below $40 a barrel.
A big part of the problem is that China, the world’s second-largest economy, is a black box to most money managers because the government’s tight rein gives them little idea what is really happening inside its economy.
Another element is continuing concern about whether the U.S. Federal Reserve will go ahead with plans to raise its target interest rate at its next policy meeting, Sept. 16 and 17.
A third worry is that big-company earnings, which will begin to be reported in about three weeks, could be damaged by the uncertain economy and the strong dollar, which makes U.S. exports more expensive. 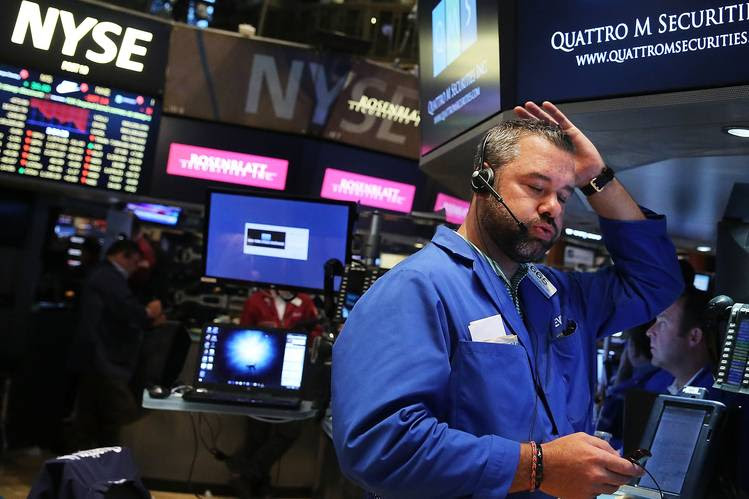 ENLARGE
A trader works the floor of the New York Stock Exchange on Friday, as the Dow fell over 500 points. PHOTO: SPENCER PLATT/GETTY IMAGES
The immediate news sowing anxiety Friday wasa survey of Chinese industrial companiesshowing manufacturing activity stagnating in August. The index compiled from the survey hit its lowest level in six years, 47.1. A level above 50 on the index from research-firm Markit indicates expansion, and one below 45 suggests contraction, so China’s number was on the fringe.
Investment strategist Jason Pride at Glenmede Trust Co., which oversees $30 billion in Philadelphia, noted that similar surveys released by research firm Markit showed better results for the rest of the world. Japan was at 51.9, the U.S. at 52.9 and the countries that use the euro at 54.1.
“This really appears to be a China phenomenon,” Mr. Pride said. “We are watching really closely the connection to the rest of the world and whether this is enough to slow growth in the rest of the world. We are still thinking that the domestic economy and those other two pillars of the world, Europe and Japan, are really moving in the right direction.”
He said his firm has used stock options to protect some positions from losses and had some time ago shifted some money out of the U.S. and into Europe and Japan in a belief prices were more favorable there and those markets would hold up better in the medium term. He said that, even if the American market remains troubled for a while, U.S. and foreign stocks should keep rising in the longer term, because the global economy seems poised to avoid recession.
Many professional investors are watching for signs the Fed might delay raising rates. In practical terms, even if the Fed raises them, the impact is expected to be minor. The Fed’s target rate for overnight lending currently is near zero; an increase would likely put it only near 0.25%. But a Fed delay would be viewed by many as a gesture of support and a positive for stocks.
More analysts and money managers have been forecasting that Fed officials could delay a rate increase until December or even 2016 to avoid unsettling global economies. But Fed officials are widely believed to be eager to begin pushing rates higher, because they share the widespread view that the U.S. economy is recovering and that a tiny increase would be both overdue and virtually painless. This has created fears the Fed may decide to act despite the global jitters, which could have a psychological effect on investors.
“They shouldn’t move in September but quite likely they might,” saidKrishna Memani, chief investment officer at OppenheimerFunds Inc., which oversees $230 billion in New York. The uncertainty contributed to the market declines, money managers said.
Even if the Fed raises rates, it and other central banks still will have unusually accommodative interest-rate policies. The latest economic data are widely expected to prompt China’s central bank to stimulate the economy further by allowing banks to boost lending levels. That comes on top of this month’s devaluation of China’s currency, aimed at boosting exports. Tokyo and Europe, meanwhile, are keeping interest rates low and intervening in markets to buy bonds and, in Japan’s case, stocks.
How soon, or whether, central-bank stimulus might persuade investors to stop selling remains a question. An August survey of money managers by Bank of America Merrill Lynch showed the average respondent had 5.2% of assets in cash, below July’s post-2008 peak of 5.5% but still exceptionally high. The survey suggests money managers were gingerly putting some cash back to work in August, and that they have plenty left to spend if they see any signs of good news. Money managers don’t like to keep cash levels high for longer than necessary, because holding cash can pull down returns.
A big problem for U.S. stocks is that they remain exceptionally expensive by historical standards.
Despite its declines, the S&P 500 index traded Friday at 21.6 times its member companies’ net profits for the past 12 months, well above the historical average of 15.5, according to Birinyi Associates.
Write to E.S. Browning at jim.browning@wsj.com

Posted by firesprinklers at 6:10 PM