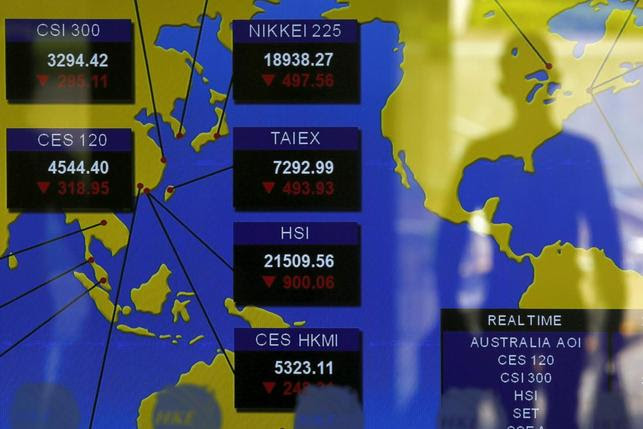 Chinese stocks dived more than 8 percent on Monday morning, with the Shanghai index giving up all its gains for the year on investor disappointment that Beijing held back expected policy support at the weekend after markets shed 11 percent last week.
The blue-chip CSI300 index .CSI300 was down 8.6 percent at 3,282.11 points by the end of the morning session, while the Shanghai Composite Index .SSEC had fallen 8.5 percent to 3,211.20 points, putting it back where it began 2015.
The Hang Seng index .HSI dropped 4.6 percent to 21,378.40 points, which analysts blamed both on weak onshore performance and to investors moving money out of yuan-denominated assets after a surprise devaluation in the Chinese currency earlier in August.
The CSI300 is now down 7 percent for the year, and futures contracts tracking the index <0#CIF:> have also dropped. Contracts for September settlement fell 9.3 percent to 3,158, 124.11 points below the current value of the underlying index, while most other index futures, including those tracking the CSI500 <0#CIC:> and the SSE50 <0#CIH:>, were down the 10 percent daily limit.
"It's difficult to judge whether investors are overreacting, or whether the market is near its bottom," said Alex Kwok, analyst at China Investment Securities in Hong Kong, noting that economic fundamentals remained weak and investor sentiment battered.
"This is already a small-scale stock market disaster. Any rebound, if there is any, could be just technical."
The fall spanned every corner of the market, with small-cap growth stocks and state-owned blue chips declining at roughly equal rates. Losses appeared limited only by China's emergency brake that limits individual shares from declining over 10 percent in a single day, and by the fact that a substantial number of stocks remain suspended from trading.
At the end of the midday session, only 11 companies trading in Shanghai and Shenzhen were in positive territory. Around 2,200 stocks, or 80 percent of the total, were down by the daily limit, according to Reuters calculations.
The drop came after Beijing failed to make a strong policy move over the weekend to support stocks, as was widely expected after an 11 percent plunge last week.
Many investors had expected the People's Bank of China (PBOC) would over the weekend cut the amount banks have to keep in reserves, which could boost stocks by increasing market liquidity and address weakness in China's vast manufacturing sector.
No such move materialized, and the only policy support in evidence was an announcement formalizing rules allowing pension funds to buy stocks, a policy initiative that had already been trailed.
"The intensified risk-off reinforces the China growth anxiety," wrote ING economists in a research note.
"We infer from last week’s double-barrel PBOC liquidity injection that capital outflows are big and may persist. There is nothing on the horizon but another round of the PBOC easing that could stem capital outflows."
BAD CURRENCY
The offshore yuan market also came under renewed pressure as global investors flee to save havens. Global markets were spooked by a shock devaluation of the onshore yuanCNY=CFXS on Aug. 11, and offshore investors have begun moving out of the currency in anticipation of further declines.
The offshore yuan was trading at a 1.04 discount to the onshore spot rate at 6.4648 per dollar, at one point nearly 700 points softer than the onshore currency, the widest since 2011.
"The dim sum bond market has been under pressure since the central bank weakened the yuan sharply," said a fixed-income trader at a Chinese bank in Hong Kong.
"We see selling mainly coming from private banks and funds that may be facing redemption requests from clients."


Posted by firesprinklers at 10:23 PM