Donald Trump and the Fox News Channel are about to televise their dispute.

Trump has been booked for a 7 a.m. Tuesday interview on "Fox & Friends," co-host Steve Doocy said on Twitter on Monday afternoon.
He said Trump will be talking "about his relationship with Fox News."
Trump has been lambasting Fox for days, ever since he was challenged in last week's GOP debate. He says the Fox moderators were unfair to him and that Fox should be "ashamed."
He hasn't been interviewed by anyone on the channel since Thursday night.
But the motor-mouth Republican candidate eased up on his criticism of the channel on Monday, tweeting that Fox News chairman Roger Ailes had just called and assured him that "'Trump' will be treated fairly on Fox News. His word is always good!"
It's unclear if Trump's "Fox & Friends" appearance will be his first on the channel, because earlier on Monday, according to a source, there were talks about a Trump interview in prime time on Monday, possibly with 10 p.m. host Sean Hannity.
It is "highly unlikely" that Trump will appear at 9 p.m. with host Megyn Kelly, the source said -- and that's probably an understatement. Trump has repeatedly and personally insulted Kelly in recent days.
Ever since then, Fox has dramatically ratcheted down its coverage of Trump. It has barely covered Trump's criticisms of Kelly and the two other debate moderators, Chris Wallace and Bret Baier.
Related: Megyn Kelly says she didn't 'attack' Trump at debate
What's unfolding is a true clash of titans. Fox News is the favored network of Republicans, and Trump is the Republican campaign front-runner.
On Sunday afternoon he tweeted: "It amazes me that other networks seem to treat me so much better than Fox News. I brought them the biggest ratings in history, and I get zip!"
The fight started several days ago when the Fox moderators posed tough questions to Trump and other GOP candidates. Kelly, for instance, was praised for asking Trump about sexist and misogynistic comments from his past.
On Friday night, speaking with CNN's Don Lemon, Trump complained about Kelly's "anger" at the debate by saying there was "blood coming out of her eyes, blood coming out of her wherever."Many people believe he insinuating something about her menstrual cycle, but Trump denied that. 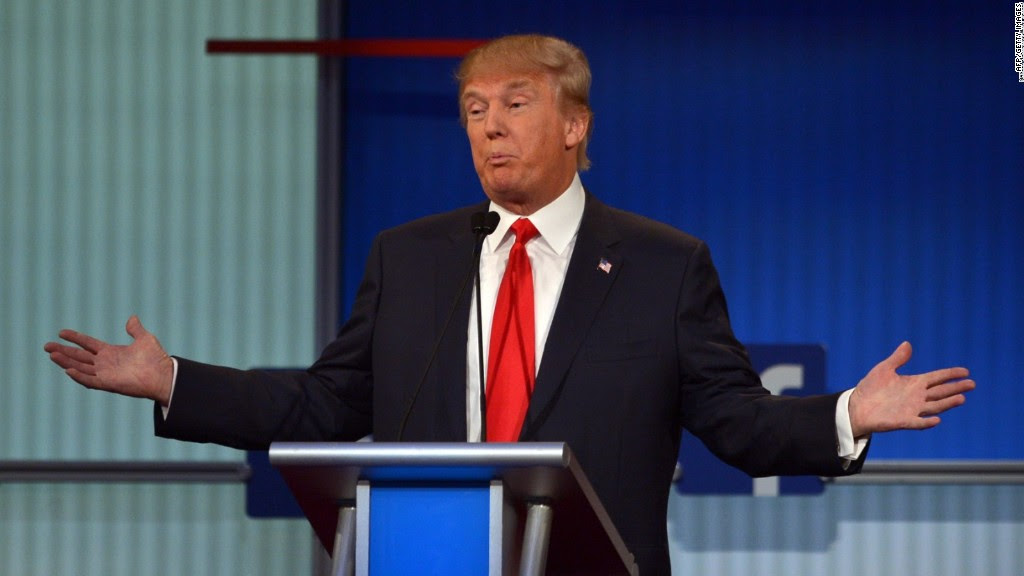 The first debate night in three minutes: Trump edition
Kelly and her bosses at Fox News have said nothing publicly about the "blood" comments. Privately, though, they are disgusted by what Trump said and by the response from some of his supporters. There has been so much invective directed at her on the Internet that it's created security concerns for Fox.
Kelly does not want to be seen as a victim; rather, she wants to stay above the fray and be seen as an independent-minded journalist.
There will surely be a lot of interest in what she says -- and doesn't say -- on her 9 p.m. program on Monday night.
As for Trump, questions about his "blood" comments continued all weekend and into Monday morning. When he called into MSNBC's "Morning Joe" on Monday, he said he doesn't owe Kelly an apology.
"She should really be apologizing to me, if you want to know the truth," he said.
Trump was uncharacteristically quiet when asked if he'd been in touch with Fox News chairman Roger Ailes over the weekend.
"I don't want to say," he said.
Then, a few hours later, Trump said Ailes had called him.
Ailes' role in all this is critical. He was a masterful Republican media consultant for decades before creating Fox News. He is widely regarded as a television genius and a conservative power broker.
And he has a long history with Trump. Before this current presidential bid, Trump was a weekly guest on the network's morning show "Fox & Friends."
According to Politico, the two men met for a long lunch in late June, shortly after Trump entered the race.
So what is Ailes thinking in this case? Ailes has a reputation as a fighter -- someone who has employed his network and his hosts to win many battles over the years.
Around the office, Ailes has been known to repeat advice from his father: "Don't pick a fight with someone who likes to fight."
Usually when he invokes it, he means it as a warning to others.
But this situation is tricky. Why? Because Trump is a fighter, too.
Related: Fox moderators get applause for tough questions
CNNMoney (New York) August 10, 2015: 2:10 PM ETRecommended by


Posted by firesprinklers at 12:07 PM