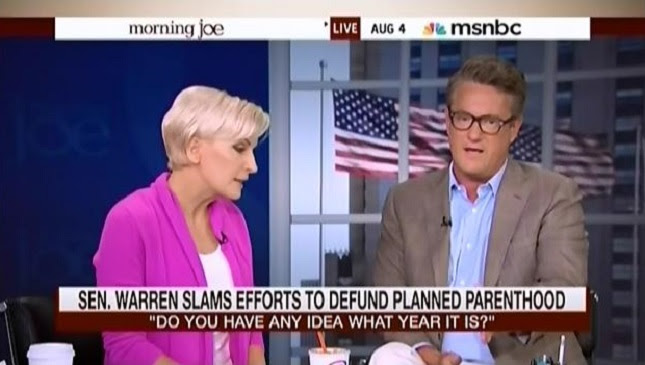 "Do you have any idea what year it is?" Warren asked. "Did you fall down, hit your head, and think you woke up in the 1950's or the 1890's? Should we call for a doctor? Because I simply cannot believe that in the year 2015, the United States Senate would be spending its time trying to defund women's health care centers. You know, on second thought, maybe I shouldn't be that surprised. The Republicans have had a plan for years to strip away women's rights to make choices over our own bodies. Just look at the recent facts." [Mother Jones,8/3/15]

JOE SCARBOROUGH: More videos are coming out and they will be worse. And for Elizabeth Warren to try to conflate the right of a woman to choose with the horrors and the callousness and the grotesqueness of what was discussed over lunch is really unfortunate. You know, Elizabeth Warren talking about the 1950s and the 1890s, she can talk about it all she wants. There is a great quote. I don't know the source but it goes something like 'just because we are not shocked by what shocked our grandmothers does not mean we are more advanced than our grandmothers.'
MIKA BRZEZINSKI: Okay. But with, you know, just to be clear here, she's talking about the issue of defunding Planned Parenthood and its services. She's not talking about what's going on in these videos.
[...]
SCARBOROUGH: Nice try Elizabeth, nice try Elizabeth Warren. Nice try. It's only going to get worse for Planned Parenthood. I agree with Hillary Clinton. There are troubling things on those tapes. And everybody needs to open their eyes and see that instead of reflexively talking about right wing attacks on a woman's right to choose. Please stop insulting our intelligence, Elizabeth Warren. Stop. [MSNBC, Morning Joe, 8/4/15]

The Videos Scarborough Cites Are Deceptively Edited And Misleading

The Videos Are Full Of Deceptive Edits Aimed At Smearing Planned Parenthood. The videos released by Center for Medical Progress have been highly edited in an effort to smear Planned Parenthood. The full, unedited versions of the videos show that Planned Parenthood has done nothing illegal and participates in consensual, legal tissue donation for medical research. [Media Matters, 7/14/15, 7/21/15, 7/28/15, 7/30/15]
FactCheck.org Debunked The First Deceptively Edited Video. In a July 21 post, Factcheck.org demolished the credibility of the first video released by Center for Medical Progress noting that the video's claim that Planned Parenthood was "selling aborted baby parts" was inaccurate and unfounded. [Factcheck.org, 7/21/15]
Investigations In Two States Have Cleared Planned Parenthood Of Any Wrongdoing. An investigation by the Indiana State Department of Health found no wrongdoing by Planned Parenthood clinics in the state and "no evidence of any laws being broken." Similarly, the Massachusetts Attorney General announced that they had also "found no evidence" of wrongdoing and noted that the health centers "are fully compliant with state and federal laws." [Media Matters, 7/31/15]

Every Dollar Invested In Publicly Funded Family Planning Services Saved Over Seven Dollars In Other Public Expenditures. The Guttmacher Institute noted that "Of the 38 million women in need of contraceptive care in 2013, 20 million were in need of publicly funded services and supplies because they either had an income below 250% of the federal poverty level or were younger than 20. The report went on:

"The problem is, in my state and many others, Planned Parenthood is the primary provider of women's health services in certain parts of my state, and as I understand the amendment, and again I'm still reviewing it, it immediately defunds Planned Parenthood," Collins said. "So I don't know how you would ensure that all of the patients of Planned Parenthood could be absorbed by alternative care providers." [The Hill, 7/29/15]


Posted by firesprinklers at 5:21 PM