US air strikes target IS gathering in Mosul, Iraq 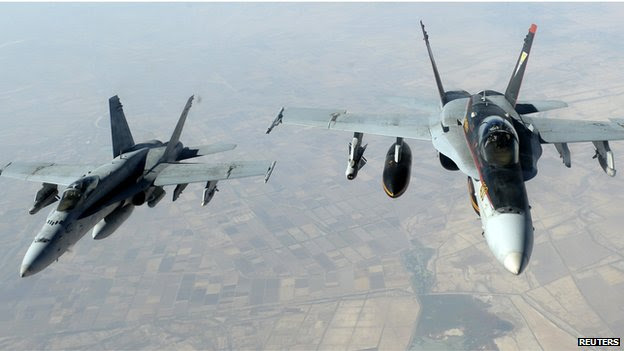 Coalition air strikes have targeted a gathering of Islamic State leaders near Mosul in northern Iraq, the US says.
Friday's strikes destroyed a convoy of vehicles, a US defence official said, but could not confirm whether IS leader Abu Bakr al-Baghdadi was present.
Baghdadi made a rare public appearance at a mosque in Mosul in July.
IS militants control large areas of Iraq and Syria but have been targeted by hundreds of air strikes by the US-led coalition since August. 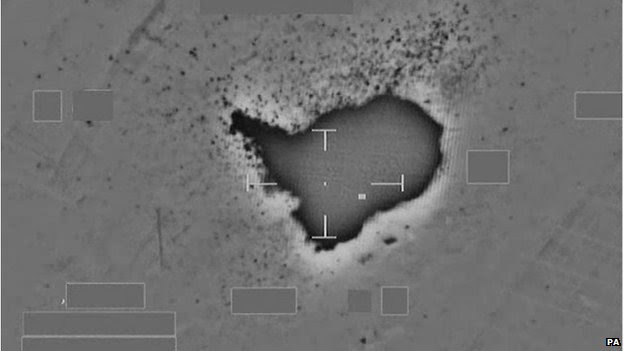 The British Royal Air Force has also carried out air strikes against IS locations and vehicles in Iraq
The statement said that 10 armed IS trucks were destroyed in the air strikes, which "demonstrates the pressure we continue to place on the IS terrorist network".
The US, Iraq and other Western and Arab countries have formed a coalition against the militant group.
The Pentagon announced on Saturday that 1,500 additional US troops will join the 1,600 military advisers that are already in Iraq to assist the country's army.
President Obama also plans to request $5.6 billion (£3.5bn) from Congress, including $1.6 billion to be used to train and arm Iraqi forces, White House spokesman Josh Earnest said.
Wave of violence

Meanwhile, a wave of car bombs killed dozens of people across Iraq on Saturday. 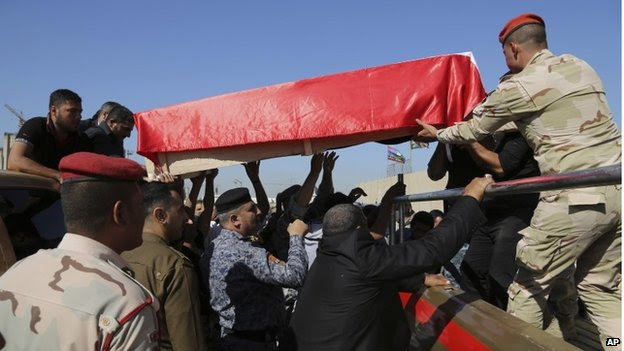 The funeral of a senior police officer was held on Saturday after he was killed in a suicide bombing attack on Friday
At least 33 people died in a series of bombings in the capital, Baghdad, with the deadliest attack killing more than 10 in the Shia neighbourhood of Sadr City.
Meanwhile a suicide bomber targeted an Iraqi military convoy in the northern town of Baiji, north of Baghdad.
Eight people were killed including top police officer Lt. Gen. Faisal Malik al-Zamel, the Associated Press reported.
The British Foreign Office has said that it is aware of and looking into reports of the death of a British citizen in Baiji.
Following the suicide bombing on Friday, reports on Twitter claimed that a Briton died in the attack, but the BBC is unable to verify this.
Car bombings occur on a near-daily basis in Baghdad, and a recent surge of attacks that appear to be targeting Shia Muslims has increased sectarian tension with Sunni communities.


Posted by firesprinklers at 2:54 PM