Firm Accused Of Illegal Practices That Push Families Into Foreclosure 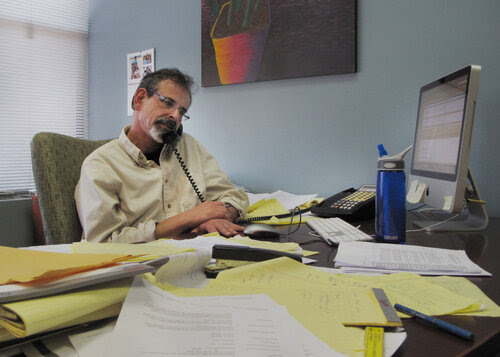 i
Gary Klein is one of the lead attorneys representing homeowners in the case against Ocwen Financial.
Chris Arnold/NPR
The fallout from the housing crisis isn't over.
According to Moody's Analytics, there were 700,000 foreclosures last year. And some of those people probably didn't need to lose their homes. Even now, more than six years after the housing crash, lawyers for homeowners say mortgage companies are still making mistakes and foreclosing on homes when they shouldn't be.
Ocwen Financial Corp. is facing an investigation by regulators and a new lawsuit over its treatment of homeowners facing foreclosures. The class-action suit alleges that Ocwen has been charging marked-up, illegal fees and unfairly pushing homeowners into foreclosure.
Ocwen, one of the nation's largest mortgage servicers, collects mortgage payments from American homeowners.
'Helping Homeowners Is What We Do'
There's some irony in Ocwen's case because for years the company claimed to be better than the country's biggest banks at avoiding foreclosures. Ocwen even trademarked the slogan "Helping homeowners is what we do!"
As a "specialty servicer," the company's executives said it had computer systems and policies that were specially designed for working with homeowners who had fallen on hard times and were having trouble paying. Since the housing crash, Ocwen's chairman, William Erbey, has become a billionaire as the company has grown.
But now regulators are investigating Ocwen — not for helping homeowners, but for hurting them.
New York state's top financial regulator, Benjamin Lawsky, recently expanded an investigation into the company. One issue: thousands of back-dated letters that made it appear that homeowners had missed their window to get help avoiding foreclosure.

Crisis In The Housing Market

Ocwen has pledged to work with regulators and fix the back-dated letter problem. But the investigation has sent Ocwen's stock price swooning — down more than 60 percent year to date. And now there's this new lawsuit on behalf of homeowners.
'It's Robbery'
The lawsuit alleges that Ocwen has been charging marked-up and illegal fees as well as engaging in deceptive business practices.
Phyllis Nugent is one of the plaintiffs, and the lawsuit says Ocwen has been unfairly pushing her into foreclosure. "They just keep sending us bills with erroneous amounts on there and then charging us all these different fees," she says.
Nugent lives with Chad Hopkins and their two children in their house in Lewistown, Ill. He's a roofing contractor. She's a nurse. And the couple says they've always made their mortgage payment — at least until things went haywire back in 2011.
They bought the house in 2002 for about $100,000. Chad Hopkins says they could afford that. "We've lived here 12 years. We've raised our two daughters here along with two of Phyllis' sons," he says. "Not only have we lived here and paid our bills, we have dumped a bunch of money into this place."
But then in 2011, Ocwen discovered that there'd been a paperwork mix-up where some property taxes hadn't been paid a number of years back.
Documents show that Ocwen then added fees and demanded a lump sum payment of $18,000. The couple says they couldn't pay that. And they say they couldn't tell how much of that was taxes and how much was fees tacked on by Ocwen.
At that point, Ocwen refused to accept their normal monthly payments. And Nugent says the company started charging them additional fees that didn't seem to make any sense.
"They charged us fees for property preservation" when the couple was clearly still living in the house and taking care of it, she says. And Nugent says Ocwen also charged them for "force-placed insurance when we always paid our insurance with my insurance man that I've had since 1996."
When taken all together, these fees were not small. In fact, Ocwen claims the couple now owes more than they borrowed in the first place. They borrowed $98,000. But an Ocwen bill cited in the lawsuit claims the couple now owes $150,000 despite a decade of making their mortgage payments.
When they'd call to try to sort all of this out, Nugent and Hopkins say, Ocwen routed them to a call center in India. They say they couldn't get their questions answered. And they were told to just pay the bill.
"We still get bills saying we owe outrageous amounts," Hopkins says.
Meanwhile, Ocwen is now moving to foreclose on their house. "Oh, yeah," Hopkins says, "they've sent foreclosure notices and they've filed here at the federal courthouse in Peoria, Ill."
Gary Klein is one of the lead attorneys representing the homeowners in the case, which has been filed in a federal court in Florida and is seeking class-action status.
Klein says there's a pattern. It usually starts with a small, fixable problem — a mix-up with an escrow account, or a homeowner misses a few payments.
"People have a relatively small and manageable default, something that they could correct, but because Ocwen adds charges in such large amounts, the problem becomes almost unsolvable," Klein says.
The lawsuit alleges that some of those fees Ocwen is charging are illegal. It says Ocwen charged Nugent and Hopkins late fees that it wasn't permitted to charge under the terms of the mortgage. The suit says Ocwen also forced upon the couple a second insurance policy through one of its own affiliates. And it alleges that the company has been improperly steering profits to itself through this affiliate company.
Meanwhile, Ocwen has been asking for larger and larger sums of money from the couple. One exhibit in the lawsuit is a recent monthly statement asking for a payment of $73,000.
"It's robbery," Chad Hopkins says. "Every day you think about ... am I going to have to pack up my stuff and lose all this investment?
"When you have small children and stuff, this is the only home they've ever known," he says. " ... [It's] very frustrating. And I know if it's happening to us, I know it's gotta be happening to other people."
Back-Dated Letters
Benjamin Lawsky, the top regulator at the New York State Department of Financial Services, recently released documents about his department's investigation.
Those documents show that regulators are looking into thousands of loan-modification letters that likely caused homeowners "significant harm" because Ocwen back-dated them. Back-dating the letters made it look like the homeowners had missed their chance to try to avoid a foreclosure.
On an investor conference call, Erbey, Ocwen's chairman, pledged to work with regulators. "One of our goals is to keep people in their homes whenever possible," he said. "Ocwen is creating a review and remediation process for borrowers potentially impacted by the letter-dating mistake the company has made."
As far as the homeowner lawsuit, Ocwen offered the following statement: "Ocwen is currently reviewing the lawsuit and will vigorously defend itself against the claims asserted. Because the litigation remains pending, Ocwen declines to comment further at this time."
Posted by firesprinklers at 1:04 PM