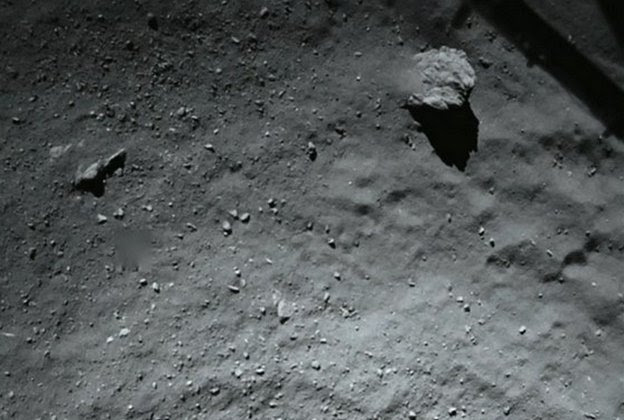 Scientists are facing a tense wait to learn the fate of a robot probe that made a historic landing on a comet - but did not stay in place as planned.
Data from the Philae craft indicates it landed at least three times on the comet, after harpoons failed to attach it to the surface on the first attempt.
Philae sent images of the icy grey comet during its approach.
The chief of the European Space Agency said the landing - after a decade-long journey - was a "big step" for humans.
Esa Director-General Jean-Jacques Dordain described it as "a great great day, not only for Esa, but... I think for the world".
Scientists are hoping the probe will analyse the comet's surface to yield insights into the origins of our Solar System more than 4.5 billion years ago.
Esa's Rosetta satellite carried Philae on a 6.4billion-km (4bn-mile) journey to Comet 67P/Churyumov-Gerasimenko.
Jump media player
Media player help
Out of media player. Press enter to return or tab to continue.
The moment the Philae comet landing was confirmed
The robot probe, the size of a washing machine, was launched from the satellite on Wednesday and spent seven hours travelling to the comet.
News of the first landing, confirmed at about 16:05 GMT on Wednesday, was received with joy at Esa's mission control in Darmstadt, Germany.
But reports about the unanchored state of Philae cast a shadow over the celebrations.
Officials said the craft may have lifted off the comet after touchdown before returning to the surface.

As early data came back from the instruments, one team could see that the lander had sunk about 4cm (1.5 inches) into the surface, suggesting a relatively soft top layer.
But shortly after, engineers saw that the harpoons, designed to fasten the spacecraft to the 4km-wide (2.5 miles) ball of ice and dust, had not fired as planned.
Waiting to resume contact
Lander project manager Stephan Ulamec told the BBC that the team would now have to wait until Thursday morning before they could say more about the probe.
However, he said the probe appeared to be in a stable position at the time of the last radio contact.
Rosetta, which relayed its communications to Earth throughout the descent, has now moved out of radio "visibility".
If this connection is re-established on cue on Thursday, the team will feel much more confident.
In a media briefing, Dr Ulamec said: "What we know is we touched down, we landed at the comet at the time when you all saw us cheering and when it was announced.
"We had a very clear signal there; we received data from the landing - housekeeping and science data. That's the good news."
But then Dr Ulamec delivered the "bad news". He said telemetry from the craft suggested it might have drifted off the surface after landing and started to turn.
This subsequently came to an end, which the German Space Agency official interpreted as a possible "second landing" on Comet 67P.
In fact, even later data would indicate that the Philae robot may have bounced twice, taking a full two hours to come to a rest.
The gap between the first and second landings was roughly two hours, and the gap between the second and third landing was less than 10 minutes. 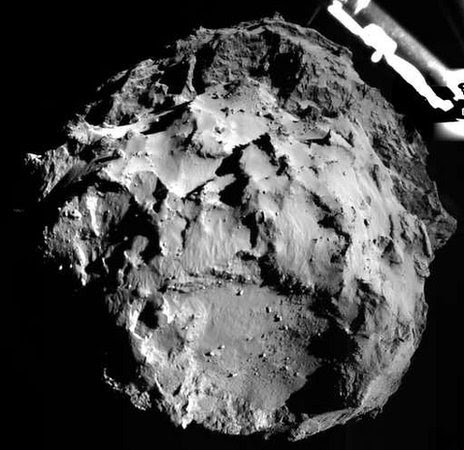 One of the cameras on Philae sent this image of the comet during the descent
This bouncing was always a possibility, but had been made more likely by the failure of the harpoons to deploy, and the failure of a thruster intended to push the robot into the surface.
The mission team must decide if the harpoons can now be commanded to fire without unsteadying the robot still further.
Pictures taken during the probe's approach showed the comet had a rocky grey surface. Philae touched down very close to the targeted zone on the head of the rubber-duck-shaped comet.
If the probe remains stable and can be properly secured, it will engage in several months of science experiments on 67P.
It will take pictures of the cometscape and analyse the surface chemical composition to test several hypotheses about the origins of life and the universe.
One theory holds that comets were responsible for delivering water to the planets. Another idea is that they could have "seeded" the Earth with the chemistry needed to help kick-start life. 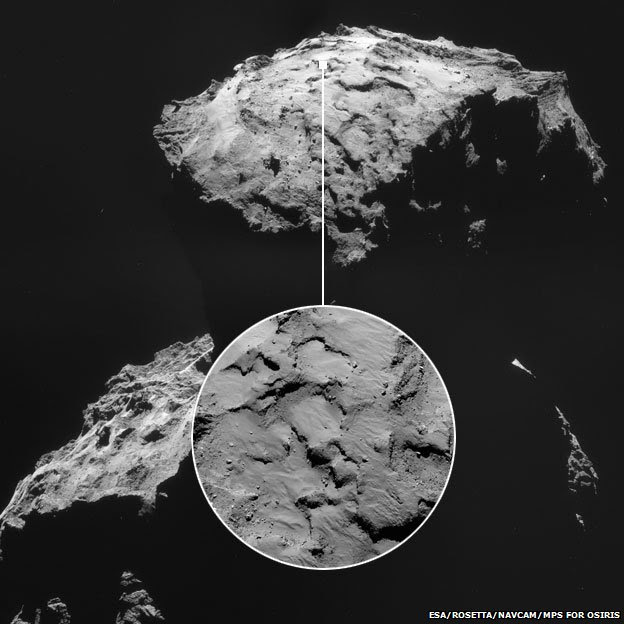 Posted by firesprinklers at 9:09 PM