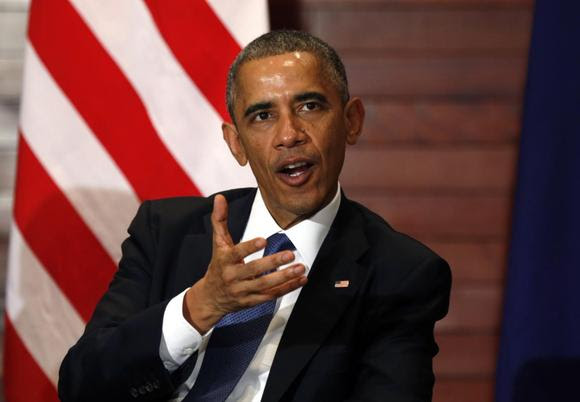 (Reuters) - U.S. President Barack Obama on Monday pressured the federal communications regulator to toughen its planned Internet traffic rules, saying higher-fee "fast lanes" should be banned and Internet providers should be overseen more like public utilities are.
Obama's detailed position on the issue of "net neutrality," a platform in his presidential campaign in 2008, represented a rare step by the White House into the policy-setting of an independent agency.
It came after nearly 4 million comments flooded the Federal Communications Commission after Chairman Tom Wheeler formally proposed new Internet traffic rules in May.
Shares of major cable companies, which connect many Americans to the Internet, slid on the news. Time Warner Cable Inc was down 3.4 percent; its planned purchaser, Comcast Corp, fell 3.o percent; and Cablevision Systems Corp was 1.8 percent lower. Verizon Communications Inc was down less than 0.1 percent.
Comcast was by far the most actively traded stock on U.S. markets, with more than 35 million shares changing hands by 11:16 a.m. EST.
Public internet groups have vigorously opposed Wheeler's proposal, which prohibited Internet service providers from blocking any content, but allowed deals where content providers would pay ISPs to ensure smooth delivery of traffic.
Obama, who is traveling in Asia, posted a statement and video message online acknowledging the FCC is an independent agency and that the decision is "theirs alone." But he sided with consumer advocates in calling for the FCC to explicitly ban "paid prioritization" and reclassify ISPs to be regulated more like public utilities.
"Simply put: No service should be stuck in a 'slow lane' because it does not pay a fee," the statement said. "That kind of gatekeeping would undermine the level playing field essential to the Internet’s growth."
Obama also said the FCC's new rules should apply equally to mobile and wired ISPs, with recognition of special challenges that come with managing wireless networks.
Wheeler, a close Obama friend and former major fundraiser, has floated several options for new rules. The latest reportedly included regulating part of the web network more like a public utility but did not prohibit paid prioritization.
On Monday, Wheeler reiterated that he, too, opposed Internet fast lanes or harmful prioritization deals but said that reclassification approaches raised substantive legal questions.
"The more deeply we examined the issues around the various legal options, the more it has become plain that there is more work to do," he said in a statement.
"We must take the time to get the job done correctly, once and for all, in order to successfully protect consumers and innovators online."
ISPs have fought hard against potential reclassification, and Verizon on Monday said such a "gratuitous" move would probably not stand up in court.
A U.S. appeals court in January struck down the previous net neutrality rules.

Posted by firesprinklers at 8:41 AM