Manhunt over, bombing suspect alive and in custody 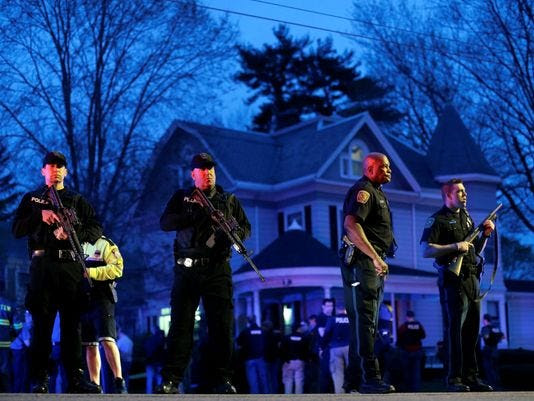 Police cornered and captured Boston Marathon bombing suspect Dzhokhar Tsarnaev Friday night.
Boston Police arrested the 19-year-old at about 8:45 p.m., after finding him holed up in a boat stored in the backyard of a Watertown residence. He was led to an ambulance and driven away from the scene.
Tsarnaev's capture came two hours after Massachusetts Gov. Deval Patrick ended a Boston-area lockdown after a massive, day-long search of suburban Watertown, which seemingly failed to flush out the teenager. Dozens of bystanders cheered and applauded and police left the scene.
Closure for many in the area began at about 7 p.m., when gunshots erupted in a Watertown residential neighborhood after Tsarnaev discovered in a covered boat resting on a towing trailer alongside a clapboard home on Franklin Street. He had been wounded in a early Friday morning firefight with police that killed older brother Tamerlan Tsarnaev, 26.
Police were tipped off by a resident who saw blood spatters on the boat, climbed up a ladder to open the tarp cover and discovered the suspect. Hundreds of police on the scene surrounded the area, initially approaching with caution for fear that Tsarnaev was wearing or holding explosive devices. 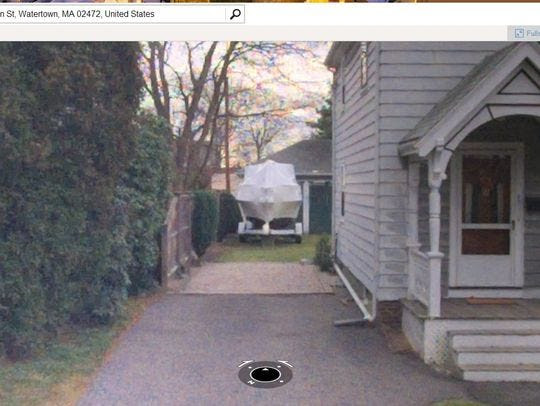 A boat in the backyard of 67 Franklin St., Watertown, Mass., is the address reported to be the center of police activity the night of April 19, 2013, in the hunt for the Boston Marathon suspect.(Photo: Bing Maps)
For most of the day, hundreds of police conducted a methodical, house-to-house sweep in Watertown for Tsarnaev.
Hours earlier, Tamerlan Tsarnaev died after a dramatic car chase and shootout with police during which the more than 200 rounds of ammunition were fired. As they were pursued, the brothers threw several pipe bombs and a grenade at police as they attempted to flee in a carjacked SUV.
Tamerlan, badly wounded, was left at the scene by his younger brother, who apparently backed over him as he sped away in a carjacked Mercedes SUV.
State Police Superintendent Timothy Alben said Dzhokhar Tsarnaev later abandoned the stolen vehicle in Watertown and fled by foot.
Authorities believe there are no other accomplices in Monday's twin bombings, which killed three and wounded 176 people near the  of the Marathon. Several victims lost limbs in the bombings, and some remain in critical condition at area hospitals. Investigators have not found any formal links to an international terror group.
The brothers' acts continue to befuddle authorities, family and friends. Students at the University of Massachusetts Dartmouth, where Dzhokar was a student, say they saw him on campus following Monday's bombings.
During the overnight and early-morning pursuit of the brothers, a federal official familiar with the case said authorities recovered a handful of improvised explosive devices (IEDs), including one in the possession of Tamerlan Tsarnaev. All of the devices appeared to be homemade explosives, including pipe bombs. Several were detonated by police Friday afternoon.
Police took Tamerlan Tsarnaev to Beth Israel Deaconess Medical Center following the exchange of gunfire with police at about 1:20 a.m. Friday. Dr. David Schoenfeld said medical personnel tried to revive him. He had multiple gunshot wounds and burn and gaping blast wounds that appeared to have come from an explosive device strapped to his body.
.Dzhokar's escape prompted Gov. Patrick to order the city of Boston and its surrounding suburbs locked down and its residents to remain in their homes for much of Friday. The Boston Red Sox and Bruins postponed Friday night games. Businesses in Watertown, Newton, Waltham, Belmont, Cambridge and the Alston and Brighton neighborhoods of Boston were requested to close, while residents were told to remain indoors until the suspect was caught. Massachusetts also shut down mass transit, including buses and trains, in Boston and surrounding suburbs, Kurt Schwartz, director of Massachusetts Emergency Management Agency said.
The Tsarnaev family is believed to have moved to the USA in 2003. They had lived in Kazakhstan for several years after fleeing war-torn Chechnya. Tamerlan attended Bunker Hill Community College in nearby Charlestown as a part-time student for three semesters from 2006 to 2008. He studied accounting.
In an telephone interview from Russia with the Associated Press, the brothers' father, Anzor Tsarnaev, said Dzhokhar is "a true angel" and "an intelligent boy." In subsequent media interviews, he said his sons had been framed for Monday's bombings. 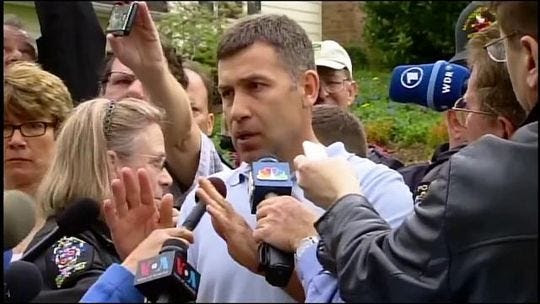 Ruslan Tsarni of Md. says 19-year-old Dzhozkar Tsarnaev should turn himself in to police and ask for forgiveness
Ruslan Tsarni, an uncle who had not spoken to his brother's sons since December 2005, urged Dzhokhar to turn himself in to authorities. Meeting with reporters Friday outside his home in Montgomery County, MD., Tsani said he believed the brothers may have been recently "radicalized." Tsarni says he was unaware of any military or weapons training they may have received. Tsarni called the brothers "losers" and said they had brought his family shame.
Dzhokhar Tsarnaev is believed to have dropped a backpack laden with explosives at the site of Monday's second explosion. He was pictured wearing a white baseball cap in video images released by the FBI Thursday. His page on the Russian social networking site Vkontakte says he attended Cambridge Rindge and Latin School, graduating in 2011. He won a $2,500 college scholarship from the city of Cambridge. On the website, his world view is described as "Islam" and he says his personal goal is "career and money." 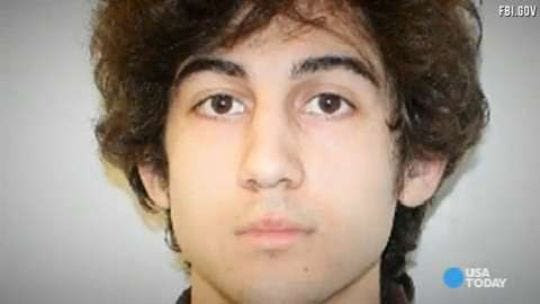 Police are on the hunt for 19-year-old Dzhokhar Tsarnaev, the second suspect in the Boston Marathon bombings. His brother, 26-year-old Tamerlan Tsarnaev, was killed in a firefight with police early Friday.
Larry Aaronson, a neighbor and retired history teacher at Cambridge Rindge and Latin School, got to know Dzhokhar while taking photos of the high school wrestling team and other school activities.
"It's completely out of his character," Aaronson said of Dzhokhar's alleged role in the bombings. "Everything about him was wonderful. He was completely outgoing, very engaged, he loved the school. He was grateful not to be in Chechnya."
Dzhokhar was not overtly political or religious, Aaronson says. "He spoke and acted like any other high school kid."
Aaronson says he can't reconcile the young man he knows with the characterizations he's seeing in the media. "I cannot do it," he says. "I mean this from the deepest part of my heart: It's not possible it's the same person. It's just not possible."
The manhunt for the marathon bombing suspects turned into hot pursuit late Thursday evening. MIT campus police officer Sean Collier was shot multiple times as he was sitting in his car.
Collier, 26, was later pronounced dead at Massachusetts General Hospital. He had been a campus cop since January 2012 and previously, a civilian employee at the Somerville Police Department.
The brothers carjacked a Mercedes SUV between 12:15 and 12:30 a.m, holding the driver at gunpoint for a half hour before he was shoved from the car unharmed. A federal law enforcement official, who was not authorized to comment publicly, said the men allegedly told the driver that they were the Marathon bombers.
The official said the suspects' allegedly acknowledged their roles in the Marathon bombings to both intimidate the driver and brag about the bombings.
Police found the car and the suspects in Watertown, and pursued them into a residential neighborhood where gunfire was exchanged.
A transit police officer, Richard H. Donohue Jr., 33, was shot once during the firefight. He underwent surgery and is listed in critical condition at Mount Auburn Hospital. 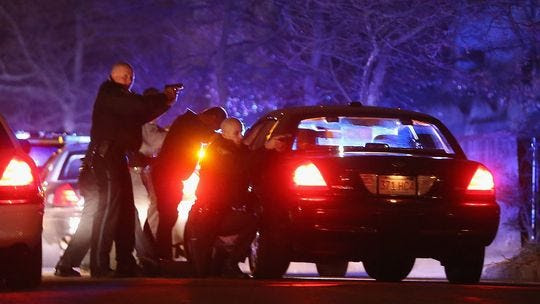 Amateur video purports to show a police shootout during a manhunt for the Boston Marathon bombing suspects.
Alvi Tsarnaev, another uncle of the suspects, said Friday that Tamerlan phoned him Thursday night at about 7 p.m., the first time they had spoken in about two years.
"He said, 'I love you and forgive me,' " said Alvi Tsarnaev, who lives in Montgomery Village, MD. He wasn't seeking forgiveness for the bombing, but asking for forgiveness because he hadn't spoken to him in so long.
"We were not talking for a long time because there were some problems," Alvi Tsarnaev said without elaborating. "We were not happy with each other."
They spoke for about five minutes, he said. Tamerlan, who is Muslim, started out by saying, "Salam Aleikum," an Arabic greeting meaning "peace on you." He then praised his uncle for keeping up with his Muslim prayers.
"He told me he was happy," he said. "He was asking, 'Did you pay your mortgage?' I told him I was trying to pay. I asked him what he was doing. He said, 'I fix cars, I got married, got a baby.'
"Killing innocent people, I cannot forgive that," Alvi Tsarnaev said. "It's crazy. I don't believe it now even. How can I forgive this?" 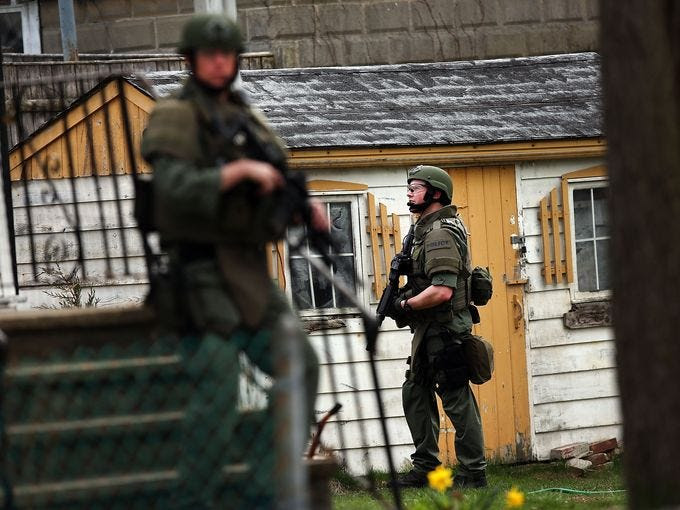 Police search a Watertown, Mass., neighborhood for 19-year-old bombing suspect Dzhokhar Tsarnaev on April 19.  Spencer Platt, Getty Images
Fullscreen
Next Slide
The Lowell Sun reported that Tamerlan Tsarnaev was a Golden Gloves boxer who told the newspaper that "I like the USA" after winning his first fight in 2004 in Lowell. He fought in the 178-pound novice class.
According to the Sun, Tamerlan and his family moved to the USA in 2003, hoping to start a new life. "America has a lot of jobs. That's something Russia doesn't have. You have a chance to make money here if you are willing to work," he told The Sun.
Contributing: John Bacon and Mary Beth Marklein in McLean, Va.; Yamiche Alcindor and Melanie Eversley in Boston, William Welch in Los Angeles, Judy Keen in Chicago and Shawn Cohen of The (Westchester County, N.Y.) Journal News. 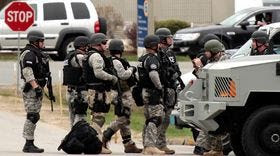 Posted by firesprinklers at 6:33 PM