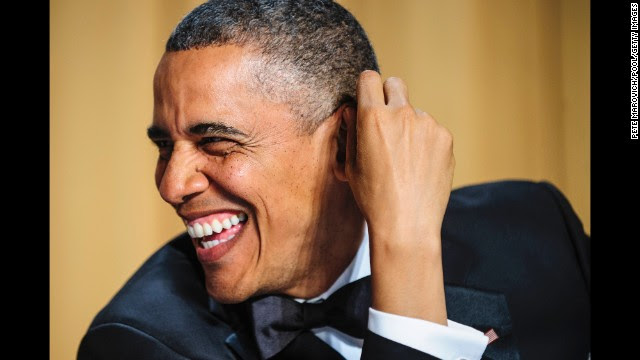 President Barack Obama laughs during the White House Correspondents' Dinner at theWashington Hilton on Saturday, April 27.
HIDE CAPTION
White House Correspondents' Dinner
<<
<
1
2
3
4
5
6
7
8
9
10
11
12
13
14
15
16
17
18
19
20
21
22
23
24
25
26
27
28
29
30
31
32
33
34
35
36
37
>
>>
STORY HIGHLIGHTS
(CNN) -- The annual White House Correspondents' Dinner is usually an occasion for glitz and good-natured ribbing, particularly from the president.
But in light of the tragedies in Boston and West, Texas, the invited guests who arrived at Saturday's dinner were curious how somber or light-hearted of an evening they were in for.
With TBS' late-night talk show host Conan O'Brien tasked with leading the night's ceremony, at least a little comedy was a certainty. The "Conan" comedian joked when his role was announced in February that guests could expect "[two] minutes of jokes, then 40 minutes on public employee pension reform." O'Brien first hosted the Correspondents' Dinner in 1995.
President Barack Obama, who is attending the gala for the fifth time Saturday, has also become quite a pro at landing some of the night's biggest punchlines.The president quipped at last year's dinner, which was hosted by ABC's Jimmy Kimmel, that his hair had grayed so much since taking office he was just a few years out from looking like Morgan Freeman.
In 2011, at a dinner hosted by Seth Meyers of "Saturday Night Live," he made light of the controversy surrounding his long-form birth certificate by playing a clip from "The Lion King" as his "birth video."
The Beltway gala, also known as the "nerd prom," sees Washington's newsmakers stroll a red carpet that's also filled with press and stars from across entertainment. Attendees included fashion influencers like Vogue editor-in-chief Anna Wintour, and sports stars like Olympic champ Gabrielle Douglas and Louisville sophomore Kevin Ware, who suffered a horrific leg break during an NCAA tournament game last month.
There were also enough famous faces to have the night mistaken for an awards ceremony. Kerry Washington, Rebel Wilson, Katy Perry, Sofia Vergara, John Legend, Elizabeth Banks, Psy, Michael J. Fox and Matthew Perry were all in attendance. With the president being a professed fan of Showtime's "Homeland," perhaps it wasn't surprising to see stars Claire Danes and Morena Baccarin there as well.
For Attorney General Eric Holder, the dinner is an opportunity to put away political differences, "put on tuxedos, have fun and make fun of each other." Yet whatever laughs will be had during the evening, he said, will happen with April's heartbreaking events in mind.
The dinner, which raises money for journalism scholarships, was first established in 1920 with the intent to increase communication between the president and the press. It was a men-only event until 1962, when President John F. Kennedy said he wouldn't attend unless women were invited as well.
Posted by firesprinklers at 7:56 PM