Ted Kemp | @TedKempCNBC
10 Hours AgoCNBC.com
13
COMMENTSJoin the Discussion
Sir Nicholas Soames, a member of the U.K. parliament and grandson of Sir Winston Churchill, said it's a bad idea for the United Kingdom to split from the European Union.
Calling Thursday's U.K.-wide referendum "the most important vote in my political lifetime," Soames took a long view and told CNBC that he believes it would be a mistake for the country to step away from the relative stability it has enjoyed since it joined the EU.
"I mean, you know, in one week's time we celebrate the first day of the Battle of the Somme, where 57,470 ... British soldiers gave their lives in one day," said the Conservative member of Parliament. After the human upheaval of two world wars, "we've achieved peace, prosperity and security on a scale unimagined for a thousand years. Is it a sensible thing to leave? I don't think so." 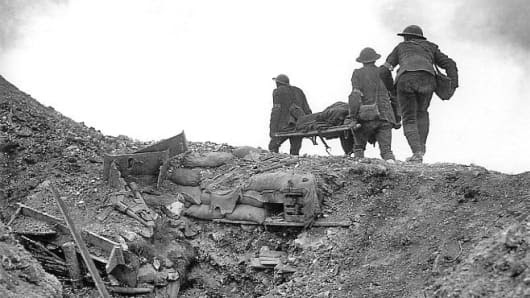 United Kingdom Government | Wikimedia
British stretcher bearers recovering a wounded soldier from a captured German trench during the Battle of Thiepval Ridge, late September 1916, part of the Battle of the Somme.
Soames declined to state unequivocally how his famous grandfather, who as prime minister steered Great Britain through World War II, would vote on the Brexit. But he holds serious doubt that the elder Churchill would support a departure from the EU if he were alive.
"If you were to put him here today, does anyone really believe that in all that time, with all his experience, that looking out over a very unstable, fragile, uncertain world, he would really think this was a good idea for Britain to cut itself loose from the Continent which it has so often had to ride to the rescue?" he asked.
The United Kingdom is the EU's second-largest economy, and it's widely feared that a departure from the bloc would have major implicationsfor global economic stability.
U.K. voters are hitting the polls Thursday, and results are expected overnight.
— CNBC's Wilfred Frost contributed to this report.
Posted by firesprinklers at 6:48 PM