Greece Races to Agree on Reforms


International Creditors Will Review Proposals From Athens on Monday


ATHENS—The Greek government began a race Saturday to agree on a list of economic reforms ahead of a review by its international creditors on Monday, after striking a tenuous agreement for a four-month extension of its bailout.
Prime Minister Alexis Tsipras called Friday’s deal an “important success,” but said negotiations with Greece’s creditors were now entering a more important stage.
“We won a battle, but not the war,” he said in a televised address. “The difficulties lie ahead of us.”
The bailout extension, which followed weeks of often harsh exchanges with other European governments, removes immediate concerns over a potential exit from Europe’s currency union, but sets the stage for further talks over Greece’s financial future.
The deal forced Greece’s new government to temper many of the antiausterity pledges it made in the run-up to last month’s election.

Mr. Tsipras met his inner cabinet of 10 ministers on Saturday to discuss potential budget cuts and economic overhauls that will face the scrutiny of the supervisors of the bailout—the European Commission, the European Central Bank and the International Monetary Fund—on Monday. On Tuesday, eurozone finance ministers will review the proposals.
Only once these measures have been implemented would Athens receive the next €7.2 billion ($8.19 billion) slice of a €240 billion bailout that has kept it afloat for almost five years.
Greek Finance Minister Yanis Varoufakis said late Saturday after the cabinet meeting, that the list will be ready by tomorrow. He said that if the three institutions don’t approve the measures proposed by the Greek side, then a new Eurogroup will have to take place on Tuesday.
“But there will be no need for another Eurogroup,” he added.
Greece’s negotiations with its international creditors since Mr. Tsipras’s left-wing Syriza party swept to power in January have frayed its relationships with other governments—particularly with Wolfgang Schäuble, the German finance minister.

‘We won a battle, but not the war.’
—Greek Prime Minister Alexis Tsipras

“We kept Greece decent and standing,” Mr. Tsipras said, adding that the agreement canceled the previous conservative-led government’s austerity commitments to the country’s creditors.
Mr. Varoufakis was able to take some small victories back to Athens on Friday. Greece will likely be allowed to run a smaller primary surplus—a measure of its budget balance that strips out interest payments—than the 3% of gross domestic product mandated by its bailout deal this year. 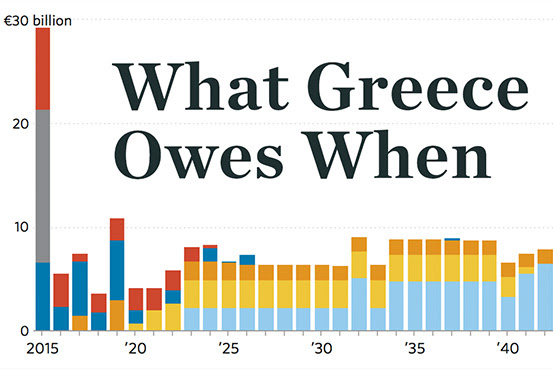 ENLARGE
But the ministers’ statement Friday stressed that this concession had been made only because the economy has performed worse than expected.
Athens will also get to swap out some measures that had been set out in the existing bailout deal, but only if it can come up with substitutes that have the same financial and economic impact.
“As of today we’re beginning to be co-authors of our destiny, co-authors of the reforms that we want to implement,” Mr. Varoufakis said Friday.
The deal was greeted with relief by many in Greece who believe that this was the first time in years that the country was actually negotiating with its creditors.
“This is the first time that Greece expressed its opinion,” said George Kordonouris, a 54-year-old restaurant owner. “I already feel younger; I feel much more optimistic. And after the four-months extension, I expect things will become even better.”
Others remain pessimistic and think that the government will not be able to deliver even a small portion of the promises made before the election.
“The deal only managed to cover Greeks at an emotional level,” said Ioanna Bekiari, a 49-year-old concierge. “Greeks feel that they have won something, but haven’t really understood the outcome. Nothing is going to change, because it would cost too much to deliver any of the government’s promises.”
It also isn’t clear whether Mr. Tsipras will be able to sell Friday’s deal to a coalition in Athens that comprises leftist activists who have spent years campaigning against the country’s bailout, as well as right-wing nationalists focused on regaining sovereignty.
“[Friday’s] deal is a good first step, but largely theoretical. Can it get through Parliament?” said Mujtaba Rahman, Europe director at political risk consultancy Eurasiagroup. “The governing coalition [in Athens] doesn’t have a mandate to implement this deal.”
Write to Nektaria Stamouli at nektaria.stamouli@wsj.com

Posted by firesprinklers at 12:54 PM