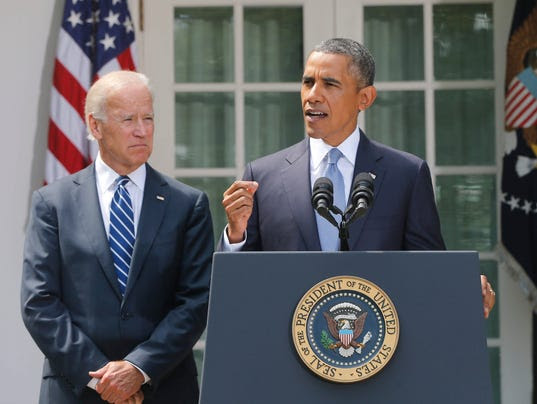 WASHINGTON--- President Obama said on Saturday that he was ready to take military action against Syrian President Bashar Assad, but that he will seek the approval of Congress before carrying out a military strike.
Obama says congressional leaders have agreed to schedule a debate and vote when they return to session. They are scheduled to return from their summer recess on Sept. 9.
The president did not say if he'd forgo a strike if Congress rejects his call to action.
"This attack is an assault on human dignity," Obama said with Vice President Biden standing by his. "It also presents a serious danger to our national security."
The remarks came amid a flurry of briefings for skeptical lawmakers by the president's national security team. The shouts from hundreds of activists outside the White House protesting against military action could be heard from the Rose Garden shortly before Obama spoke.
"Over the last several days, we've heard from several members of Congress who want their voices to be heard," Obama said. "I absolutely agree."
Senate Minority Leader Mitch McConnell, R-Ky., welcomed the decision.
"The President's role as commander-in-chief is always strengthened when he enjoys the expressed support of the Congress," McConnell said.
Sen. Bob Corker, R-Tenn., the top Republican on the Senate Foreign Relations Committee, praised Obama's decision to seek congressional authorization as "absolutely the right decision." Corker in recent weeks had been a public advocate for an authorization vote, contending the Congress too often takes a back seat on determining critical foreign policy decisions.
Obama noted some have advised not to seek Congress' approval, noting that the British Parliament this week rejected a similar call for action by Prime Minister David Cameron. Obama seemed to leave open the possibility that he could move ahead with a strike even if Congress refuses to go along with his request.
"While I believe I have the authority to carry out this military action without specific Congressional authorization, I know the country will be stronger if we take this course and our actions will be even more effective," Obama said. "We should have this debate. The issues are too big for business as usual."
The remarks came hours after U.N. experts, who had been collecting samples from last week's alleged chemical weapons strike outside Damascus, left the country bound for the Netherlands.
The chemical weapons experts were working to determine what occurred in the apparent chemical weapons attack near Damascus on Aug. 21, which U.S. intelligence reports say left 1,429 people dead, including 426 children. They have taken blood and urine samples from victims and soil samples from areas where chemical attacks have been reported. The samples will be tested in Europe.
Posted by firesprinklers at 11:35 AM