Aim of a U.S. Attack on Syria: Sharpening a Blurred ‘Red Line 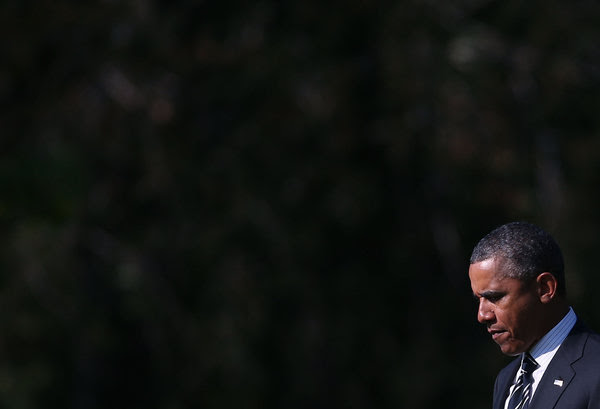 Mark Wilson/Getty Images
President Obama has spoken of “a shot across the bow” that would be intended to warn the Syrian government against further chemical weapons attacks.

Follow@nytimesworldfor international breaking news and headlines.
Twitter List: Reporters and Editors
If carried out effectively, the strikes may also send a signal to Iran that the White House is prepared to back up its words, no small consideration for an administration that has proclaimed that the use of military force remains an option if the leadership in Iran insists on fielding a nuclear weapon.
But the military strategy that the Obama administration is considering is not linked to its larger diplomatic strategy of persuading President Bashar al-Assad of Syria to yield power and join in negotiations that would end the bloody civil war.
Even if the American-led attack includes allied aircraft, the options under consideration by Mr. Obama for Syria — one or two days of cruise missile strikes from at least four United States Navy Arleigh Burke-class destroyers in the Mediterranean Sea — would not amount to the sort of open-ended campaign that might compel Mr. Assad to negotiate a transfer to a transitional government.
“The kind of attack the administration appears to be planning will demonstrate to Syria and to others that there is a cost the United States is willing to impose for crossing clearly established American red lines and violating widely held international norms,” said Richard Fontaine, the president of the Center for a New American Security, a centrist research center.
But, he said, “It probably will do very little to alter the fundamental balance of forces on the ground or hasten the end of the conflict.”
Mr. Obama appeared to acknowledge as much on Wednesday when he characterized the potential military operation as “a shot across the bow” that would be intended to caution Mr. Assad from further chemical weapons attacks. “That doesn’t solve all the problems inside of Syria,” Mr. Obama told the PBS program “NewsHour,” “and, you know, it doesn’t obviously end the death of innocent civilians inside of Syria.”
In previous conflicts, the United States and its allies have made extensive use of air power to compel a foreign leader who was repressing his opposition to come to the negotiating table.
In the Clinton administration, the United States and its NATO allies carried out extensive airstrikes against Serbian forces in Bosnia, which weakened them to the point that Slobodan Milosevic, the Yugoslav president, agreed in 1995 to a peace settlement along with other Bosnian leaders at an American Air Force base in Dayton, Ohio.
In Kosovo in 1999, an intensive NATO air campaign that lasted 78 days led to an agreement in which Serbian forces withdrew from Kosovo, and the region achieved autonomy and eventually independence.
In the Obama administration, Secretary of State John Kerry has pursued a diplomatic strategy, repeatedly emphasizing the need to put pressure on Mr. Assad to change his “calculation” about his ability to hang on to power. Mr. Kerry’s goal has been to facilitate a political settlement in which a transitional government would assume “full executive powers.”
In May, Mr. Kerry flew to Moscow where he met with President Vladimir V. Putin of Russia and announced that there would be a peace conference in Geneva aimed at brokering such a transition and bringing an end to the Syrian conflict, which has killed more than 100,000 people.
State Department officials initially said the peace conference might occur before the end of May, but plans became bogged down in differences between the United States and Russia, and the conference has yet to be held.
And the Obama administration did not articulate a comprehensive military strategy that would — in concert with allies — be certain to weaken the Assad government to the point that it would be willing to cede power and negotiate.
At the time, the United States was training a small number of Syrian rebels and trying to coordinate with Arab nations, which were arming the opposition. In June, after the White House determined that the Syrian government had crossed a “red line” by carrying out a series of low-level chemical weapons attacks, the Obama administration stepped up indirect military involvement by deciding to covertly arm the rebels.
NEXT PAGE »
Posted by firesprinklers at 6:58 PM