By Anthony Cook | acook@al.com
Email the author | Follow on Twitter
on May 07, 2013 at 12:13 PM, updated May 07, 2013 at 2:53 PM
He's no Denzel Washington.
He's more of a mix between Samuel L. Jackson and Rollo from "Sanford & Son."
But he's got just as much personality, has saved more people, and he's available for interviews to the local media.
Meet Charles Ramsey – the face of America's newest hero. 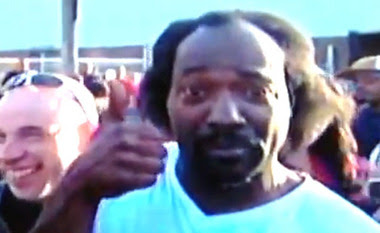 View full sizeScreen capture of Charles Ramsey from his interview with WEWS-TV.
On Monday, Ramsey went from obscurity to national sensation as the man who rescued Amanda Berry, an Ohio woman missing for 10 yearsand long-thought to be dead.
But, even beyond his actions Monday, his interview with a local TV station has made him an instant internet star.
In an interview with WEWS-TV, Ramsey said he heard screaming Monday and saw a woman trying desperately to get outside and pleaded for help to reach police.
"I see this girl going nuts trying to get out of her house," he said. "A body can't fit through (the door) only your hand."
It wasn't until after she was out of the house and he was on the phone with 911 that Ramsey realized who he had helped.
"She said 'Call 911. My name is Amanda Berry.' ... I'm calling 911 for Amanda Berry? I thought this girl was dead."

Once police arrived, they stormed the house and brought out two other women and a 6-year-old.
I knew something was wrong when a little pretty white girl runs into a black man's arms.
In the coming days, we'll learn more about Ramsey, more about his background, who he was before he became famous.
From Cleveland.com, we already know he's a dishwasher at a local restaurant in Cleveland.
We know he's not the smoothest of interviewees. He's too easily distracted and even interrupts himself as he's speaking.
We also know that he's a quote machine. Here are some instant classics from that initial interview:
"It's some more girls up in that house."
"They go up in there, 30-40 deep, and when they came out was just astonishing."
"You got some big testicles to pull this off, bro! 'Cause we see this dude Every Day!"
"We eat ribs and whatnot and listen to Salsa music."
"Nothing exciting about him ... well ... until today. Hahaha."
"I knew something was wrong when a little pretty white girl ran into a black man's arms. Dead giveaway. Dead giveaway."
Who says stuff like that? America's newest hero, that's who.
We also know that, when Ramsey had the chance to ignore cries for help and continueminding his own business, he chose to help a stranger who appeared to be in trouble.
A Cleveland police official giving an early-morning interview today said Amanda Berry's the real hero.
Granted, Amanda Berry is a survivor, and it was heroic for her to take the opportunity to cry out for help.
But if Charles Ramsey had chosen to keep walking – as so many of us do when we see trouble – then those women might still be in captivity today.
He might not look the part, but at least three women and a 6-year-old girl are thankful he played the part.
He's not Denzel or Snipes or The Rock.
Charles Ramsey is a real hero.
Anthony Cook is the community news director for AL.com and The Huntsville Times. Reach him at acook@al.com, 256-532-4340,
Posted by firesprinklers at 2:51 PM