Note: I have written to Jamie three separate times starting in October 2006 asking him to resolve my dispute with the bank. Unfortunately the replies indicated that he had not personally read my mail. Too bad. 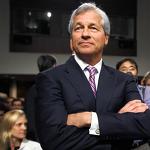