How to prepare for a hurricane

Hurricanes: What you don't know

How to prepare for a hurricane

Hurricanes: What you don't know

Apalachicola, Florida (CNN)Florida's governor issued a stern warning Thursday for a state that hasn't had a hurricane landfall for a decade: Hermine, expected to hit the eastern Florida Panhandle by early Friday, could be memorably dangerous.
Now spinning across the Gulf of Mexico, Hermine became a Category 1 hurricane on Thursday and is expected to slam into the Big Bend region of Florida's Gulf Coast around midnight, bringing potentially deadly storm surges of up to 8 feet along with heavy rain, the National Hurricane Center said.
When Hermine makes its expected landfall, it would be the first hurricane to do so in the state since Wilma in 2005. 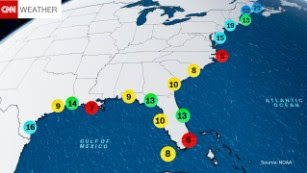 Are we prepared for a major hurricane?
"This is life-threatening," Gov. Rick Scott told reporters in Tallahassee on Thursday. "The storm surge, by itself, is life-threatening."
Forecasters said storm surge will be dangerous from Indian Pass to Longboat Key. Some areas could see surge as high as 9 feet.
Live coastal video: Florida braces for Hermine
"We have not had a hurricane (landfall) in years. So many people have moved to our state (since) then, and we always have visitors," he said. He warned people in the storm's path to have at least three days of supplies, and to heed any mandatory evacuation orders along the coast.
Rain has been pounding Florida's Gulf Coast ahead of the storm since Wednesday, and forecasters say much more is in store. Hermine could bring up to 10 inches of additional rainfall to some places, including the capital, Tallahassee -- with up to 15 inches possible in small areas -- before dumping heavy rain in parts of Georgia and the eastern Carolinas, forecasters said.
They warned residents to be aware of the potential for flooding.
There was also a tornado watch in effect for 41 Florida counties until 11 p.m. ET.
On Thursday afternoon, the storm's maximum sustained winds hit 75 mph, upgrading Hermine's status from a tropical storm to a hurricane.
Forecasters also warned that the storm is asymmetric, with dangerous winds and rain to the east and southeast of the center.
See CNN's storm tracker

Surge 'is what got me worried right now'

In Apalachicola on the Panhandle coast, contractors Lake Smith and Joshua Wolfhagen were boarding up windows on Thursday at the Consulate, a four-suite hotel in a two-story brick building about 60 feet from the waterfront. "Storm (surge) is what got me worried right now," Smith said. "Mostly worried about washing out the roads and a few of the homes in low-lying areas."
Wolfhagen said he feared Hermine would make for a significant disaster in Apalachicola and Franklin County -- which he said could ultimately hurt his work. 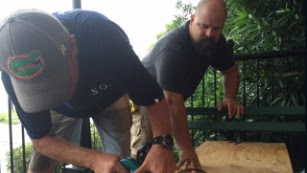 Joshua Wolfhagen, left, and Lake Smith cut a board for a window at The Consulate hotel in Apalachicola on Thursday,
"People ... don't want to build a house where storms hit. We got a bunch of work after the storm (from 2005) but we slowed way down," he said.
Eddie Bass, who owns a home in Alligator Point, said he wasn't boarding up his home because he was much more worried about the storm surge.
Bass, who left Tallahassee after packing up, said: "It's not much you can do. You just got to bring everything you can. Lock down the house and pray."
A hurricane warning was in effect for the area between the Suwannee River westward to Mexico Beach, Florida.
Scott declared a state of emergency for 51 of the state's 67 counties. He ordered all state offices in those 51 counties to close by noon Thursday.

Taking no chances with boats

People already were dealing with high water along the state's Gulf Coast ahead of Hermine. Near Keaton Beach, about 60 miles southeast of Tallahassee, homeowner Jerry Schambeau was moving his boat out of the water and onto ground Wednesday. 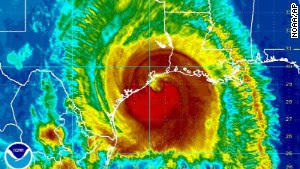 Female hurricanes are deadlier than male hurricanes, study says
"We have a boathouse for the boat, but if the tide comes up too high, it'll push the boat up through the roof of the boathouse," he told CNN affiliate WCTV-TV. "It's a lot less expensive to pull the boat out of the water ahead of time."
Largo in Pinellas County, west of Tampa, experienced heavy flooding Wednesday, with six families having to move out after water invaded their apartments, CNN affiliate WFTS-TV reported. NASA grabs stunning footage of three hurricanes 00:51
People in Spring Hill in Pasco County, north of Tampa, are still recovering from flooding a few months ago,WFTS reported. That flood made the road they depend on impassable, resident Misty Hale said.
"It's going to be 10 times worse," she said.
Residents have been sharing images of high water running through neighborhoods. In one, a man paddleboards down a street. A photo from Holmes Beach showed a woman floating on an air mattress in her driveway.
Some Florida Panhandle counties are taking no chances with their oceanside locales. Franklin County, just southeast of Panama City, issued a mandatory evacuation order for the coastal towns of St. George Island, Dog Island, Bald Point and Alligator Point, the county's emergency management office said. 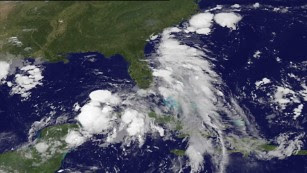 The storm may leave behind large areas of standing water, but one expert said it shouldn't increase fears over the Zika virus. 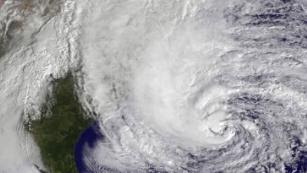 How are hurricanes named? 01:38
"We associate severe rain events like tropical events and hurricanes with increases in nuisance mosquitoes, not with disease-spreading (mosquitoes)," Ben Beard, chief of the Bacterial Diseases Branch of CDC's Division of Vector-Borne Diseases, told CNN on Thursday.
The type of mosquito that could potentially carry Zika is affected by heavy rain and flooding, which also washes away larvae from small breeding sites such as bird baths and flower pots.
Nuisance mosquitoes will breed in water that remains standing after the storm passes.

Farther north, Georgia Gov. Nathan Deal declared a state of emergency for 56 counties in his state, parts of which are expected to get up to 10 inches of rain over the weekend.
"We are working to ensure counties in south, central and coastal Georgia have access to the state resources necessary to prepare when ... Hermine enters Georgia," Deal said Thursday.
North Carolina Gov. Pat McCrory issued a state of emergency for 33 eastern counties.
CNN's Faith Robinson reported from Apalachicola and CNN's Jason Hanna and Eliott C. McLaughlin reported and wrote from Atlanta. CNN's Brandon Miller, Ralph Ellis, Madison Park and Mayra Cuevas contributed to this report.
Posted by firesprinklers at 2:56 PM