Charlotte mayor: 'This is not who we are'

Chief: We found gun, not book

When can police shoot?

Mother of protest victim: My son died for a cause

Family attorney: Keith was disabled from prior injury

Charlotte public defender: 'We're in this together'

Charlotte mayor: 'This is not who we are'

Chief: We found gun, not book

When can police shoot?

Mother of protest victim: My son died for a cause

Family attorney: Keith was disabled from prior injury

Charlotte public defender: 'We're in this together'

Charlotte, North Carolina (CNN)[Breaking news update at 4:56 p.m.]
"Video (of the fatal shooting of Keith Scott) will be accompanied by more details about what led officers to approach Mr. Scott (on Tuesday)," the Charlotte-Mecklenburg Police said on Twitter.
[Breaking news update at 4:53 p.m.]
Charlotte's police chief said the video recorded by Keith Scott's widow that was released publicly Friday didn't factor into his decision to release police-recorded video of the fatal shooting. "Our practice and our protocol is to release as soon as we can to inform," Putney said.
[Breaking news update at 4:46 p.m.]
Authorities will release the video of the fatal shooting of Keith Scott online, Charlotte-Mecklenburg Police Chief Kerr Putney told reporters. He said the link should be available to the media Saturday evening.
[Breaking news update at 4:45 p.m.]
Charlotte-Mecklenburg Police Chief Kerr Putney said he was waiting to release the video of the shooting of Keith Scott until the State Bureau of Investigation assured him it would not adversely impact the state's investigation.
[Breaking news update at 4:38 p.m.]
Charlotte-Mecklenburg Police Chief Kerr Putney said at a news conference that the department will release video footage of the shooting of Keith Scott, an African-American man who was killed earlier this week by a black police officer.
[Original story, last published at 3:49 p.m.]
Charlotte officials said they are discussing whether to release videos in the police's fatal shooting of Keith Lamont Scott as soon as Saturday, a day after his widow released her own cell phone footage.
"We are having those conversations right now," Sandy D'Elosua, a spokeswoman for the North Carolina city, said Saturday morning when asked if the police recordings could be released Saturday.
Full coverage: Charlotte protests
The victim: Who is Keith Lamont Scott?
The officer: What we know about Brentley Vinson
1 shooting, 2 wildly different narratives
Why Charlotte exploded and Tulsa prayed
The protesters: Why they came out
Flowers, donuts and hugs: Night 3 of the protests
Public defender in middle of the protests
Obama: Violent protests won't solve policing issues
Backlash resonates beyond Charlotte, Tulsa
CNN correspondent knocked down
Tuesday's shooting of Scott, a black man, by a black police officer at an apartment complex parking lot hasspurred protests in Charlotte over the past four nights. It is among a number of shootings in recent years that have spurred debate about how and when police should use deadly force.
The status of the videos held by police -- body camera and dashcam footage -- has been a point of contention between police and Scott's family, with authorities declining to release them throughout the week.
Demonstrators gathered on Charlotte streets again for a fifth day. A diverse crowd of a couple of hundred people marched from Marshall Park after a short rally. The crowd stopped at the Charlotte-Mecklenburg police headquarters and chanted: "No tapes; no peace."

Scott's widow released her cell phone recording of the shooting -- the first to be released publicly -- on Friday.
"Don't shoot him. He has no weapon," Rakeyia Scott can be heard saying in the footage. The first portions of the shaky video appear to show a number of police officers surround a vehicle in a parking lot.
A man repeatedly yells for someone -- apparently Keith Scott -- to "drop the gun." 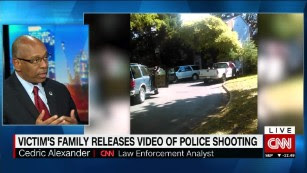 Charlotte on edge 04:07
"He doesn't have a gun. He has a TBI (traumatic brain injury)," Rakeyia Scott says. "He's not going to do anything to you guys. He just took his medicine."
She goes on to say: "Keith, don't let them break the windows; come on out the car. Keith! Don't do it. Keith, get out the car. Keith! Keith, don't you do it. Don't you do it. Keith! Keith! Keith!"
The video shakes, and for a moment, a man in bright blue pants is seen near the surrounded vehicle. Gunshots are heard as Rakeyia Scott says again, "Don't you do it."
She then yells: "Did you shoot him? Did you shoot him? He better not be (expletive) dead." Two people kneel over the figure with blue pants, apparently Keith Scott, now lying on the ground.
Smashed windows to handshakes: 24 hours in Charlotte
Police said an officer shot Scott after he failed to heed commands to drop a gun. His family has said he didn't have a gun.
The gun police say they recovered from the scene was loaded, a source close to the investigation told CNN. The source said investigators recovered from the weapon fingerprints, blood and DNA that matched with Scott. The source said the blood most likely got on the gun after the shooting.

'We want the public to take a look at this tape'

An attorney for the Scott family told CNN the tape was released because officials would not furnish the police footage to the public. 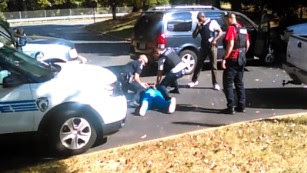 Family attorney: Keith was disabled from prior injury 01:53
"We want the public to take a look at this tape and see what was in the video before he was shot, and what was there afterward, and ask how it got there," family attorney Eduardo Curry said Friday.
Rakeyia Scott spoke of TBI in the tape, a reference totraumatic brain injury, Curry said. Scott's family has said he was disabled after being in a near-death motorcycle crash last year.
"My understanding (is) that he had had an accident last year that was pretty traumatic, and as a result, made him at least disabled in some particular instances (and was) taking medication for it," Curry said.
The Scott family said it released the video in the "name of truth and transparency," according to a statement released by attorney Charles G. Monnett. "We encourage everyone to reserve judgment until all the facts are known. This is simply one step in our quest to find the truth for this family."
Police allowed the family to see the police-held footage Thursday, but the public has yet to see it.
On Friday, Charlotte-Mecklenberg police Chief Kerr Putney said he expected police videos of the shooting to be released eventually when investigators decide it can be done as part of a package with other information, so the videos aren't made public without context.
That stance differed from the chief's message a day earlier that the public shouldn't expect the videos' release.
Curry said he doesn't expect Rakeyia Scott to speak publicly soon.
"Give the family a chance to mourn and grieve," Curry said. "At some point we'll revisit (whether she'll speak)."

Central to the protests are the differing accounts between police and Scott's family over what led to his death. Authorities said a black police officer fatally shot Scott, a father of seven, at the apartment complex as officers looked for another man named in a warrant they were trying to serve there. 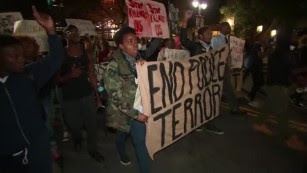 Protests largely peaceful on day 3 01:05
Police said Scott had a gun as he exited his vehicle, and that Officer Brentley Vinson shot him after Scott did not comply with officers' commands to drop the weapon.
Scott's family has said he was reading a book and waiting for his son to come home from school at the time. Police said no book was found at the scene.
Suspect arrested in Charlotte protester's death

What the police videos are said to show

Charlotte Mayor Jennifer Roberts has said that one factor affecting the timing in the release of the police videos is that investigators want to record witness' accounts and don't want their recollections altered by what they see on the videos. Vinson was not carrying a body camera, police said.
Scott's family said the police videos showed him acting calmly and not aggressively. Scott didn't own a gun or habitually carry a gun, family attorney Justin Bamberg said.
"When he was shot and killed, Mr. Scott's hands were by his side, and he was slowly walking backward," he said. 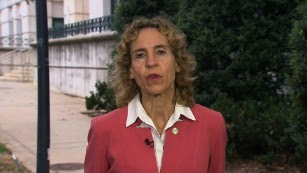 Charlotte mayor favors release of Scott shooting video 02:09
The police chief has said the video does not provide "definitive visual evidence" that Scott pointed a gun at officers. The investigation has been turned over to the State Bureau of Investigation, which said the Charlotte-Mecklenberg police are still the custodians of the videos and can release them if they want.
North Carolina Gov. Pat McCrory said Friday that the bureau has been looking for several days into the deadly encounter between Scott and police. State investigators have interviewed most of the critical witnesses in the shooting, McCrory said.
Meanwhile, a photo obtained by CNN affiliate WSOC-TV shows the immediate aftermath of the shooting, a source close to the investigation told CNN.
A black object near the bottom of the photo is a gun that police found at the scene, the source said. 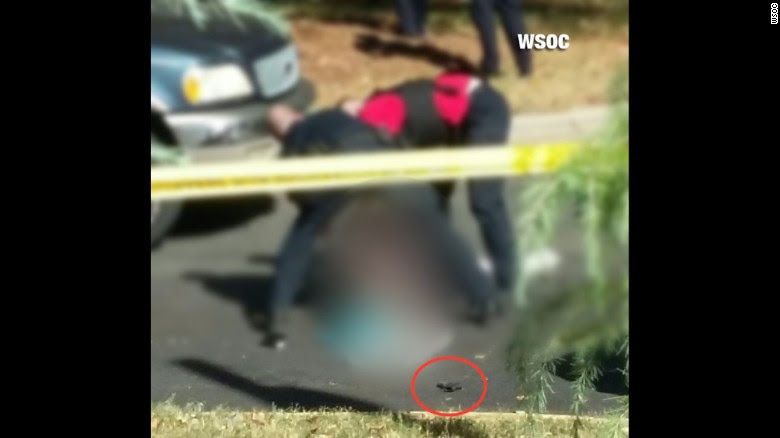 A source close to the investigation says this photo, obtained by CNN affiliate WSOC, shows the scene.
North Carolina recently passed a law that blocks the release of police recordings from body or dashboard cameras with limited exceptions. That law is set to take effect in October.
The mayor said an attorney for the city told her the law will not affect decisions about whether to release the videos in Scott's killing, because it was not in effect at the time of the shooting.
Clinton, Trump change plans to visit Charlotte after mayor's plea
CNN's Nick Valencia reported from Charlotte, and Jason Hanna and Steve Almasy wrote from Atlanta. CNN's Ed Lavandera, Holly Yan, AnneClaire Stapleton, MaryLynn Ryan, Eliott C. McLaughlin, Madison Park, Carma Hassan and Rich Phillips contributed to this report.


Posted by firesprinklers at 2:53 PM