Up to 10 million gallons of water gushed by UCLA; flow stopped 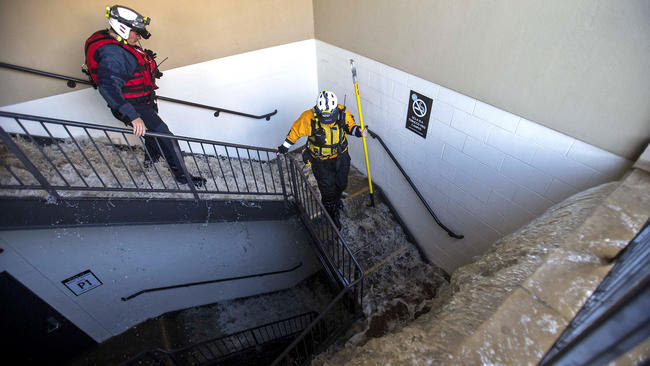 Los Angeles water officials faced tough questions Tuesday night about their response to a massive pipe break that flooded UCLA and surrounding areas with millions of gallons and threatend the near-term use of Pauley Pavilion.
The rupture of the 90-year-old main sent a geyser shooting 30 feet in the air flooded parts of Sunset Boulevard and UCLA with 8 million to 10 million gallons before it was shut more than three hours after the pipe burst, city officials said.
The huge break blanketed parts of the campus with water and water, leaving school officials with a dauting cleanup task. City officials said they had not determined what caused the 30-inch wide pipe to burst.
Motorists were urged to avoid Sunset Boulevard Wedensday morning because crews would be still be repairing the line.
The break raised questions about the city's aging water system from reporters who questioned a top Los Angeles Department of Water and Power official about whether the agency responded quickly enought to stem the torrents of water.
Jim McDaniel, a DWP senior assistant general manager, said that crews had to battle rush-hour traffic to get to the scene on Sunset Boulevard, a short distance from the UCLA campus.
Once there, he added, the crews had to figure out which valves needed to be closed.
"We had to do research to get to the correct valve," McDaniel said. Closing the wrong valves, he said, would have left people without water.
The main line delivers 75,000 gallons a minute and broke shortly before 3:30 p.m. It was finally shut down around 7 p.m., city officials said.
lRelated 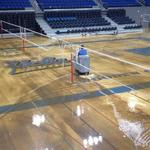 SEE ALL RELATED
8
UCLA officials said Tuesday night that they would be unable to determine whether athletic teams would be able to use Pauley Pavilion this season until the cleanup is done and the damage is assessed.
Crews were using squeegees and water vacuums to clear water and silt from the floor of the venerable Pauley Pavilion, which underwent a $136-million renovation in 2012 and is home to UCLA basketball and other athletic teams.
On Tuesday night, more than 3-1/2 hours after the line ruptured, about an inch of water remained on the floor.
At one point, up to 8 inches of water covered the main floor of the pavilion, and it was even higher in some lower rooms, UCLA spokeswoman Carol Stogsdill told The Times.
Video
Related: Water main break floods UCLA campus
Los Angeles Times Staff
City officials said Los Angeles Department of Water and Power crews worked as quickly as possible to shut down three large-diameter valves. But they couldn't be closed too quickly because doing so could trigger additional ruptures in the web of water lines that feed the area, according to officials.
McDaniel of the DWP said the city uses roughly 550 million gallons of water each day.
"In the grand scheme, it's something we can manage," he said of the flooding.
The water had been raging for nearly two hours when Los Angeles Mayor Eric Garcetti said at 5:15 p.m. that it would take crews at least another hour to shut down the line.
Thousands of gallons of water trapped five people in their cars as they tried to drive out the flood zone, according to the Los Angeles Fire Department.
Water was seen inside the J.D. Morgan Center, which houses athletic staff and administration offices, the George Kneller Academic Center, UCLA's Athletic Hall of Fame and the John Wooden Center.
cComments ADD A COMMENTSEE ALL COMMENTS
45
Water and mud also flooded Drake Stadium, the track and field facility.
Tractors on campus were dropping dirt to create embankments to try to channel torrents of water away from buildings.
Lauren Bernardy, 17, of Orange County was on the campus lacrosse field for a summer sports camp when water began flooding the field.
"All of a sudden there's water rushing and we had to grab our things. We just started running and we were being chased by water," she said.
Lauren said there is a parking structure under the lacrosse field and track and field stadium, and many cars were trapped by the rushing water. She watched several cars try to drive out of the water but wind up trapped.
Within five minutes, she said, the water had rushed from the edge of the lacrosse field to the Drake track stadium, which was submerged. Other students near Pauly Pavilion could be seen walking in shin-deep water, she said.
At Pauley Paviliion, workers Tuesday night were using brooms, squeegees, vacuums and floor cleaners to remove the water. As that work was underway, sand bags sat stacked at the the service entrance in an effort to hold back water still cascading down the stairs
Earlier in the day, Garcetti said on Twitter that the pipe involved is from 1921. He said the pipe is being “shut down now, but will take an hour to prevent shock to the system and further damage.”
The water main ruptured shortly before 3:30 p.m. in the 10600 block of Sunset Boulevard, fire officials said.
Sunset was closed in both directions from Marymount Place to Westwood Plaza, complicating the rush-hour commute for scores of drivers.
"This is the same thing you would have in any flash flood," Los Angeles Fire Department Capt. Jaime Moore said.
He said that "thousands and thousands of gallons" of water had flooded the area from a 15-foot-wide hole on Sunset just a few yards from the UCLA campus.
People were evacuated from parking lots 4 and 7, Moore said. Firefighters searched 200 cars for possible victims.
An LAFD swift-water rescue team with four inflatable boats was at the scene, standing by in case people were stranded.
Students took off their shoes and waded across rivers of ankle-deep water on campus. Other people were showing up with boogie boards -- a move discouraged by firefighters.
"That is probably one of the most dangerous things you can do," Moore said. "For somebody to try and boogie board in this, it's just going to be an asphalt bath."
Water was as high as wheel wells shortly after the flooding began.