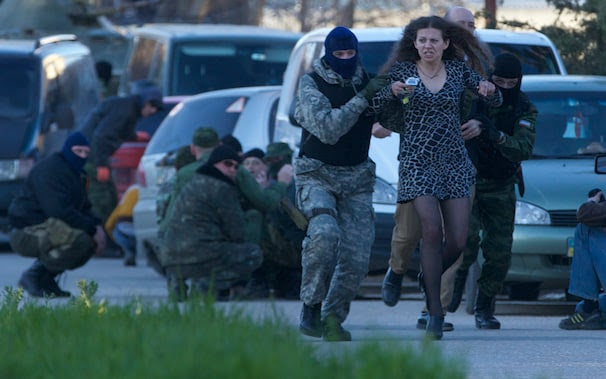 BELBEK, Crimea — With a burst of automatic weapons fire and stun grenades, Russian forces in armored personnel carriers on Saturday broke through the walls of one of the last Ukrainian military outposts in Crimea, then quickly overpowered Ukrainian troops armed only with sticks.
The fall of the Belbek air base, along with the loss of a second Ukrainian air base Saturday near the Crimean town of Novofedorivka, removed one of the last barriers to total Russian control of the Crimean Peninsula.
Video

A Russian armored vehicle attempts to enter Belbek air base in Crimea where Ukrainian forces are resisting handing over control.
Latest from National Security

Karen DeYoung 6:22 PM ET
The White House began to notify Congress of the new deployments as they began Sunday night.

Ellen Nakashima MAR 22
The agency wanted to see if Huawei was spying on the U.S. for Beijing, according to the Snowden leak.

Anne Gearan MAR 22
Ambassador Sergey Kislyak has stayed publicly silent and out of sight as the Crimea crisis has worsened.