This fault could bring an earthquake worse than 'The Big One'

By Rong-Gong Lin II
The Puente Hills fault, which scientists believe could be responsible for Friday's 5.1 earthquake in La Habra, is considered very dangerous.

Here are some basic questions about the fault.

Q: What would be the difference in shaking between a 5.1 quake and a truly huge quake?

But a 7.5 quake on the Puente Hills fault could cause the fault to slip for 20 seconds — and the shaking could last far longer.Friday night's earthquake was caused by the underground fault slipping for half a second, said U.S. Geological Survey seismologist Lucy Jones, prompting about 10 seconds of shaking at the surface.
Scientists say that quake would be more destruction than the so-called Big One on the San Andreas fault.
Q: Why are scientists so worried about the fault?
The Puente Hills thrust fault is so dangerous because of its location, running from the suburbs of northern Orange County, through the San Gabriel Valley and under the skyscrapers of downtown Los Angeles before ending in Hollywood.
The Puente Hills fault could be especially hazardous over a larger area because of its shape. Other local faults, like the Newport-Inglewood and Hollywood, are a collection of vertical cracks, with the most intense shaking occurring near where the fault reaches the surface. The Puente Hills is a horizontal fault, with intense shaking likely to be felt over a much larger area, roughly 25 by 15 miles.
Video simulations of a rupture on the Puente Hills fault system show how energy from a quake could erupt and be funneled toward L.A.'s densest neighborhoods, with the strongest waves rippling to the west and south across the Los Angeles Basin.
Q: What is the worst-case scenario?
According to estimates by the USGS and Southern California Earthquake Center, a massive quake on the Puente Hills fault could kill from 3,000 to 18,000 people and cause up to $250 billion in damage. Under this worst-case scenario, people in as many as three-quarters of a million households would be left homeless.
One reason for the dire forecast is that both downtown L.A. and Hollywood are packed with old, vulnerable buildings, including those made of concrete, Jones said.
The violent motion would be amplified by the soft soil underneath the Los Angeles Basin and the valleys, which produces a jello effect as shaking waves wobble off the basin.


LA HABRA, Calif. — Experts say a bigger earthquake along the lesser-known fault that gave Southern California a moderate shake could do more damage to the region than the long-dreaded “Big One” from the more famous San Andreas Fault.
The Puente Hills thrust fault, which brought Friday night’s magnitude-5.1 quake centered in La Habra and well over 100 aftershocks by Sunday, stretches from northern Orange County under downtown Los Angeles into Hollywood — a heavily populated swath of the Los Angeles area. 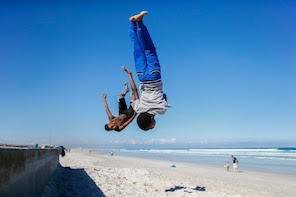 Best news photos of the week


A magnitude-7.5 earthquake along that fault could prove more catastrophic than one along the San Andreas, which runs along the outskirts of metropolitan Southern California, seismologists told the Los Angeles Times (http://lat.ms/1houJzW ).
The U.S. Geological Survey estimates that such a quake along the Puente Hills fault could kill 3,000 to 18,000 people and cause up to $250 billion in damage. In contrast, a larger magnitude 8 quake along the San Andreas would cause an estimated 1,800 deaths.
In 1987, the fault caused the Whittier Narrows earthquake. Still considered moderate at magnitude 5.9, that quake killed eight people and did more than $350 million in damage.
Part of the problem with the potential damage is that the fault runs near so many vulnerable older buildings, many made of concrete, in downtown Los Angeles and Hollywood. And because the fault, discovered in 1999, is horizontal, heavy reverberations are likely to be felt over a wide area.
The shaking from a 7.5 quake in the center of urban Los Angeles could be so intense it would lift heavy objects in the air, like the 1989 Loma Prieta Earthquake in Northern California, where the shaking was so bad “we found an upside-down grand piano,” USGS seismologist Lucy Jones told the Times.
That would “hit all of downtown,” Jones said. “And everywhere from La Habra to Hollywood.”
About 150 aftershocks, including one of magnitude-4.1, were felt since Friday night’s quake, which forced several dozen people in the Orange County city of Fullerton out of their homes after firefighters discovered foundation problems that made the buildings unsafe to enter, authorities said.
Fire crews red-tagged 20 apartment units after finding a major foundation crack. Structural woes, including broken chimneys and leaning, were uncovered in half a dozen single-family houses, which were also deemed unsafe to occupy until building inspectors clear the structures. Seventy residents remained displaced, down from 83 after the initial quake.
Another 14 residential structures around the city suffered lesser damage, including collapsed fireplaces.
A water-main break flooded several floors of Brea City Hall, and the shaking knocked down computers and ceiling tiles, Stokes said.
It was not immediately clear if City Hall would reopen Monday. An email to the mayor was not immediately returned.
___
Posted by firesprinklers at 12:56 PM