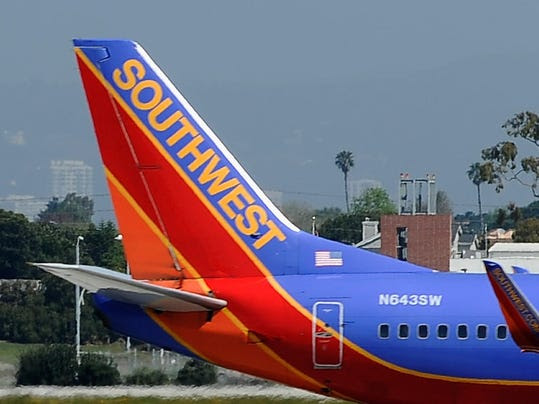 (Photo: Kevork Djansezian, Getty Images)
SHARE 15CONNECT 1TWEET 1COMMENTEMAILMORE
A Southwest Airlines flight from Chicago bound for Branson, Mo., landed safely at a different nearby airport, the airline confirmed Sunday night.
Southwest spokesman Brad Hawkins said Flight 4013 from Midway landed safely and without incident at M. Graham Clark-Taney County Airport, which goes by the initials PLK, instead of as scheduled at Branson Airport, BKG, a short distance away.
The Boeing 737-700 carried 124 passengers and a crew of five, the airline said.
"Our ground crew from the Branson airport has arrived at the airport to take care of our customers and their baggage,'' Hawkins said. "The landing was uneventful, and all customers and crew are safe.''
He said he had no explanation for why the jet landed at the county-owned airport, which primarily serves charter, corporate and general aviation flights. It was originally developed by the College of the Ozarks.
Federal Aviation Administration spokesman Tony Molinaro said the FAA is investigating the incident.
The flight was scheduled to go from Chicago to Branson, and then on to Dallas.
Jeff Bourk, executive director of the Branson Airport, said passengers were brought by bus to the correct airport, and Southwest brought in another aircraft for those traveling on to Dallas.
"It didn't sound like a typical plane," said Jeff Engel, a Branson teacher who lives less than a mile from the Taney airport. He said the plane sounded louder than what he was accustomed to hearing there.
"I wasn't concerned about any danger. My dog perked up and I thought it was unusual," he said. "Now it's kind of scary. You don't know what's going on."
Engel said he typically hears smaller planes landing and taking off at the airport. It is about eight miles north of the larger Branson Airport in Hollister, Mo.
The M. Graham Clark Airport started as a dirt runway in the late 1960s. The longest of the two asphalt runways there is 3,738 feet.. At the commercial Branson airport, the concrete runway is more than 7,000 feet in length.
In December, Southwest Airlines announced it will cease operations at the Branson Airport in June after serving the airport for about 15 months.
Riley also reports for the Springfield (Mo.) News-Leader
Posted by firesprinklers at 9:06 PM