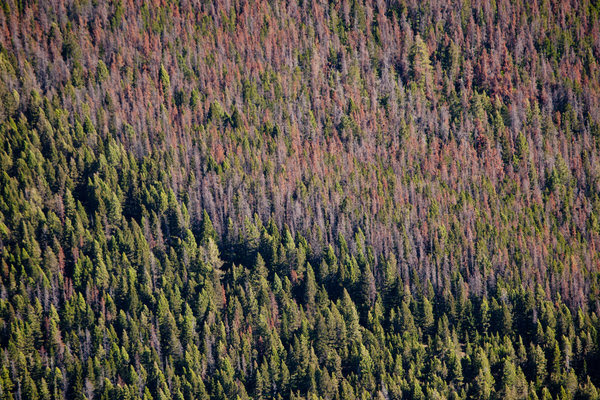 Josh Haner/The New York Times
An aerial view of damage caused by a mountain pine beetle infestation in Montana. A new report by the National Research Council cited climate change as playing a "significant role" in the recent infestations across North America.

Articles in this series focus on the central arguments in the climate debate and examine the evidence for global warming and its consequences.

Connect With Us on Social Media

At the same time, some worst-case fears about climate change that have entered the popular imagination can be ruled out as unlikely, at least over the next century, the panel found. These include a sudden belch of methane from the ocean or the Arctic that would fry the planet, as well as a shutdown of the heat circulation in the Atlantic Ocean that would chill nearby land areas — the fear on which the 2004 movie “The Day After Tomorrow” was loosely based.
In a report released Tuesday, the panel appointed by the National Research Council called for the creation of an early warning system to alert society well in advance to changes capable of producing chaos. Nasty climate surprises have occurred already, and more seem inevitable, perhaps within decades, panel members warned. But, they said, little has been done to prepare.
“The reality is that the climate is changing,” said James W. C. White, a paleoclimatologist at the University of Colorado Boulder who headed the committee on abrupt impacts of climate change. “It’s going to continue to happen, and it’s going to be part of everyday life for centuries to come — perhaps longer than that.”
While most climate scientists believe the human release of greenhouse gases has made immense changes in the earth inevitable, they hope many of these will happen slowly enough that society can adapt.
The document the panel released Tuesday is the latest in a string of reports to consider whether some changes could occur so suddenly as to produce profound social or environmental stress, even collapse. Like previous reports, the new one considers many potential possibilities and dismisses most of them as unlikely — at least in the near term.
But some of the risks are real, the panel found, and in several cases have happened already.
It cited the outbreak of mountain pine beetles in the American West and in Canada. The disappearance of bitterly cold winter nights that used to kill off the beetles has allowed them to ravage tens of millions of acres of forests, damage so severe it can be seen from space.
Likewise, a drastic decline of summer sea ice in the Arctic has occurred much faster than scientists expected. The panel warned that Arctic sea ice could disappear in the summer within several decades, with severe impacts on wildlife and human communities in the region, and unknown effects on the world’s weather patterns.
Among the greatest risks in coming years, the panel said, is that climate change could greatly increase the extinction rate of plants and animals, essentially provoking the sixth mass extinction in the earth’s history. The panel said many of the world’s coral reefs, a vital source of fish that feed millions of people, already seemed fated to die within decades.
Another risk, judged to be moderately likely over the coming century, is that rising heat in the upper ocean could result in reduced oxygen in the deep. The worst-case scenario would be the creation of huge zones with too little oxygen for sea creatures to survive, with unknown consequences for the overall ecology of the ocean, the panel said.
It considered the possibility that a collapse of the West Antarctic ice sheet, believed to be especially vulnerable to a warming ocean, would greatly increase the rate of sea level rise. It found that risk, in the near term, to be “unknown but probably low.”
The National Research Council is a nonprofit group in Washington that frequently oversees studies on major scientific questions; this study was commissioned by several government agencies.
Posted by firesprinklers at 5:26 PM