This is why the Navy didn't shoot down Russian jets

United States Navy Destroyer USS Donald Cook operating in international waters in the Baltic Sea experienced several close interactions by Russian aircraft on April 11 and 12.
Russian pilots rattled nerves aboard the destroyer Donald Cook, buzzing within yards of the ship in the Baltic Sea. Provocative, sure. But they weren't a credible threat.
So concludes a retired Navy commanding officer, who reviewed photos and videos from the run-ins on Monday and Tuesday, when unarmed Sukhoi Su-24 fighters flew within 1,000 feet of the ship — once coming as close as 30 feet in what U.S. officials called "simulated attacks."  On Monday, a low-flying Russian Ka-27 Helix helicopter also appeared to take photos of the ship. 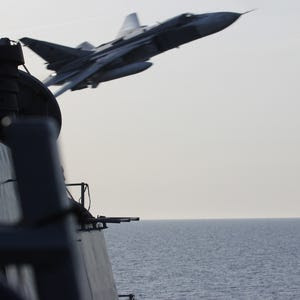 NAVY TIMES
Russian attack aircraft just flew within 30 feet of a U.S. Navy ship
This was definitely provocative, but it doesn't amount to a threat, said the retired frigate and cruiser CO.
"Well, we’re not at war with Russia," Capt. Rick Hoffman said. "It would be one thing to be operating and have a threatening attack profile from someone who might not recognize me — that’s not the case here."
If you have visual identification of the jet, can see it isn't carrying weapons, and don't detect any electronic emissions suggesting there was a missile lock on the ship, there's nothing to be done.
"You don’t get to kill people just because they’re being annoying," said Hoffman, who commanded frigate DeWert and cruiser Hue City. Cruisers are the fleet's foremost air defense platform and are tasked with guarding flattops from incoming threats.
FacebookTwitterGoogle+LinkedIn
Russian attack aircraft buzzes U.S. Navy ship
Fullscreen 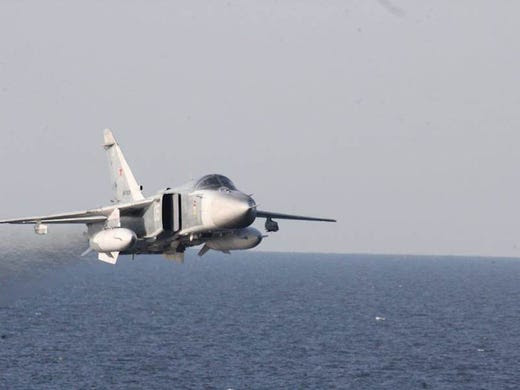 A Russian Sukhoi Su-24 attack aircraft makes a low altitude pass by the USS Donald Cook (DDG 75) April 12, 2016. Donald Cook, an Arleigh Burke-class guided-missile destroyer, forward deployed to Rota, Spain is conducting a routine patrol in the U.S. 6th Fleet area of operations in support of U.S. national security interests in Europe.  U.S. Navy photo
Fullscreen
Next Slide
7 Photos
Russian attack aircraft buzzes U.S. Navy ship
There's a possibility that the "simulated attack" might violate a 1973 treaty between the U.S. and Russia that deals with this behavior.
Otherwise, Hoffman added, it just amounts to showboating.
"Only in 'Top Gun' does a war suddenly break out between two airplanes that is completely not related to something going on ashore," he said.
To be sure, the rules might be different in another situation. The Baltic Sea is not a contested area of responsibility.
"We would probably not have accepted that from an Iranian aircraft in the Persian Gulf, although we’ve seen it," Hoffman said.
Or if it had been a civilian aircraft, he added, the CO would have been more on guard for a potential suicide mission. But the likelihood that a rogue Russian pilot would take a shot at an American ship and then try to fly home through the airspace of multiple NATO partners is very low.
It's more likely that the stunt will end up as a public relations tool for Russian President Vladimir Putin, showing force against the Americans operating in his backyard.
"It would be real interesting to see what shows up in the Russian papers in the morning, how they play it," Hoffman said. "It's not that different from North Korea. He does something and then he plays it domestically however he needs to play it for the purposes of getting his people energized."

Posted by firesprinklers at 4:09 PM