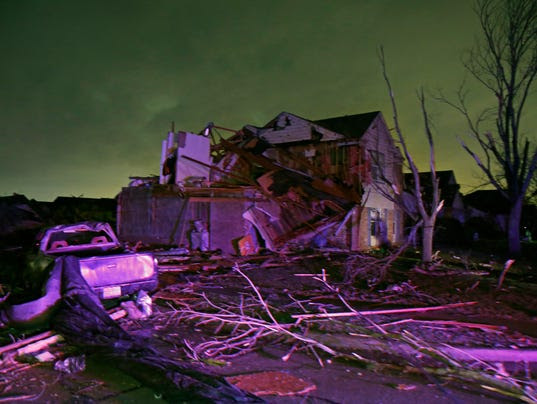 (Photo: Guy Reynolds, The Dallas Morning News via AP)
6796CONNECTTWEET 19LINKEDIN 150COMMENTEMAILMORE
The death toll from a swath of tornadoes that roared through the Dallas area rose to 11 Sunday as the state struggled to combat heavy rains, floods and what was shaping up as an "epic" snowstorm.
"There will be an ongoing problem for the next 24 hours, but also for the next several days," Gov. Greg Abbott said in a news conference. He issued disaster declarations in four counties and pleaded with residents to stay off the roads.
The state's woes were a microcosm of the angry weather that has targeted parts of the Midwest and South. The toll already has been heavy, with at least 36 deaths in Texas, Alabama, Arkansas, Illinois Mississippi, Missouri and Tennessee. And the weather system that drove a string of killer tornadoes and flash floods across a swath of the nation over the last several days was poised to continue Monday.
Heavy snow was forecast from North Texas and New Mexico through parts of Oklahoma, Kansas, Nebraska and Iowa,  meteorologist Tim Oram told USA TODAY. On Sunday, snow and ice brought whiteout conditions and locked up roads across much of North and West Texas. Parts of New Mexico and Oklahoma were also being blasted, and New Mexico Gov. Susana Martinez declared a State of Emergency, calling the weather issues there "dire."
Weather service meteorologist Mark Wiley said much the region can expect 8-16 inches of snow, with some isolated areas seeing 20 inches or more before the storm slides East sometime Monday
"This is really going to be an epic snow in Texas," Wiley told USA TODAY. "Throw in 50-mph winds and we are calling for drifts to 10 or 12 feet."
Other areas will see brutal ice storms, he added. And there was the rain: Heavy rains that have paralyzed parts of Illinois, Indiana, Kentucky and Missouri were sweeping through the Dallas area and into parts of Oklahoma and Arkansas. Heavy rains and flooding were expected to bring more havoc to some of those areas plus Arkansas, Tennessee and Kentucky, Oram said. 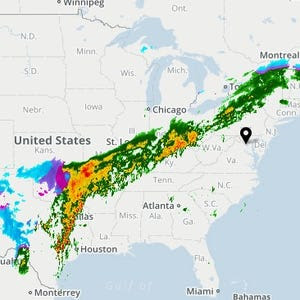 USA TODAY
Weather snarls flights on busy Sunday travel day
At least 11 tornadoes blasted through the Dallas area Saturday, a preliminary count that could rise or fall in coming days, Wiley said.
Hardest hit Saturday was Garland, Texas, a city of 230,000 people 20 miles northeast of Dallas, where eight people died and 15 were injured, police Lt. Pedro Barineau said. Most of the fatalities occurred on highways as multiple cars became caught in the severe weather, and several vehicles plunged as far as 17 feet from a bridge, authorities said. Barineau said 600 homes and businesses were damaged.
"It's total devastation," Barineau said. Three people, including an infant, died in , Texas, about 40 miles northeast of Dallas, according to the Collin. In Ellis County, 40 miles south of Dallas, no deaths were reported but County Judge Carol Bush said 15 homes were destroyed, and 100 homes, churches and businesses were damaged by at least one tornado.
The tornado that roared through Garland was rated an EF-4, with winds reaching 175 mph, Wiley said. This is the USA's first EF-4 tornado to strike in December in 15 years. It is also the farthest west a tornado of that strength has formed in December, according to the tornado research site U.S. Tornadoes..
Until the holiday season outbreak, only 10 people had died in tornadoes across the nation this year, the fewest number on record. Wiley blamed the rare run of December tornadoes in part on a strong El Niño that has been pushing spring-like temperatures across much of the North and East. El Niño also can take some blame for the snowstorm — another trait of the system is colder than normal temperatures in parts of the South, Wiley said. 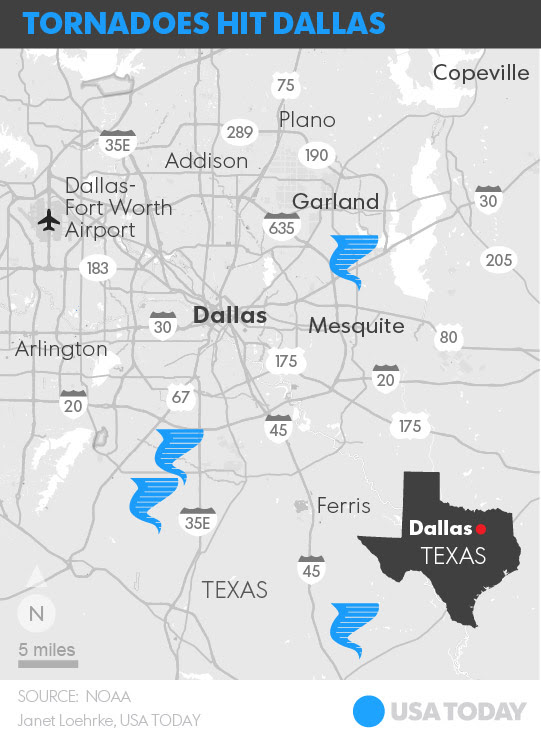 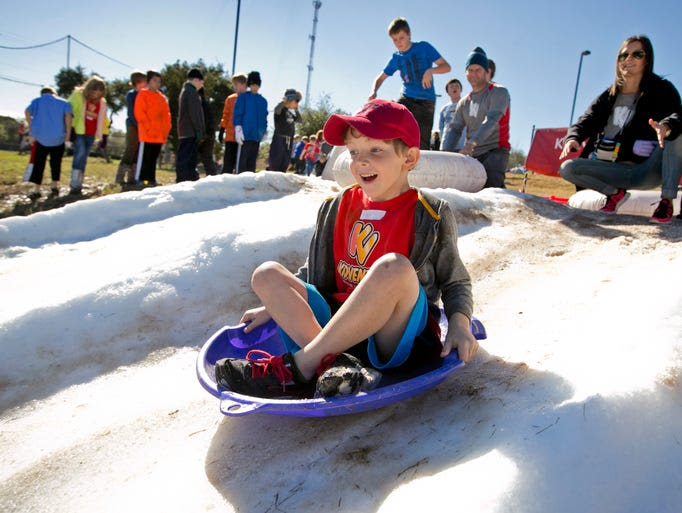 Kase Knussman sleds down a hill with 30,000 pounds of man-made snow at LifeAustin Church in Austin on Dec. 22, 2015. Even though temperatures were in the mid-70s, about 150 children, ages 6-13, got to experience a snow day.  Jay Janner, AP
Fullscreen
Next Slide
Contributing: Katharine Lackey and Doyle Rice


Posted by firesprinklers at 1:46 PM