Microsoft to Take Stake in Nook Unit of Barnes & Noble

BY MICHAEL J. DE LA MERCED AND JULIE BOSMAN
4:04 p.m. | Updated
Microsoft announced on Monday that it would invest $300 million in Barnes & Noble’s Nook division for a 17.6 percent stake. The deal values the e-reader business at $1.7 billion.
The move by Microsoft will help bolster the standing of Barnes & Noble’s fastest-growing unit. The bookstore giant had said this year that it was exploring strategic options for the business, including a potential divestiture or strategic partnership.
The company has wagered heavily on the Nook, whose e-readers and tablets compete against Amazon’s best-selling Kindle devices in the hotly contested world of electronic books.

Earlier this month, Barnes & Noble announced a new black-and-white e-reader with a glowing screen so that it can be used in the dark. The introduction of the e-reader was followed by strong reviews from critics, and Barnes & Noble executives said the device is already sold out.
Both Barnes & Noble and Amazon are spending heavily to maintain a foothold in light of Apple’ssuccess with the iPad. 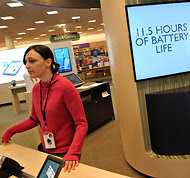 The Nook division’s growth has come at enormous financial cost, weighing down on Barnes & Noble’s bottom line and prompting the strategic review. The retailer added on Monday that it was still weighing other options for the business.
The investment from a deep-pocketed tech giant will give Barnes & Noble breathing room, allowing the company to continue to spend money developing Nook devices.
“It gives them a much larger, financially stable partner,” said Peter Wahlstrom, a senior analyst with Morningstar Equity Research. “The bricks-and-mortar side of the business is profitable but all that cash goes into investing in digital.”
For Microsoft, it is an opportunity to expand its efforts in the tablet arena, said James L. McQuivey, an analyst with Forrester Research.
“This is a way for Microsoft to have a hand in the physical tablet business without actually being in the physical tablet business,” he said.
Shares of Barnes & Noble were up more than 61 percent in midday trading on Monday, giving it a market value of $1.3 billion — still less than the valuation of just the Nook unit. Microsoft shares were little changed at $31.99.
Through the deal, the two companies will settle their patent disputes, and Barnes & Noble will produce a Nook e-reading application for the forthcoming Windows 8 operating system, which will run on traditional computers and tablets.
The new division, which has yet to be renamed, will also include Barnes & Noble’s college business. It is meant to help the business compete in what many expect to be a growth area for e-books: the education market, something that Apple has already set its sights on.
The new company and “our relationship with Microsoft are important parts of our strategy to capitalize on the rapid growth of the Nook business, and to solidify our position as a leader in the exploding market for digital content in the consumer and education segments,” William J. Lynch Jr., Barnes & Noble’s chief executive, said in a statement.
In an interview, Mr. Lynch said the company would maintain a strong relationship between the digital busineses and the brick-and-mortar stores. “We’re not changing the base number of the stores materially,” Mr. Lynch said, noting that there are many cities with high-income residents that no longer have a bookstore in the wake of Borders’ liquidation last year. “We’re looking to play a little offense with the bookstores.”
Barnes & Noble will capture additional points of distribution from hundreds of millions of Windows users, potentially reaching consumers who did not associate the bookseller with e-books.
Publishers appeared to be cheered by the news. Mr. Lynch said that he had received encouraging e-mails Monday morning from chief executives from five of the six major publishers in the business.
“These publishers are completely aligned with Barnes & Noble,” Mr. Lynch said. “Publishers are going to like this deal a lot.”
Barnes & Noble was counseled by the law firm Cravath, Swaine & Moore, while Microsoft was advised by Simpson Thacher & Bartlett.
Posted by firesprinklers at 5:03 PM