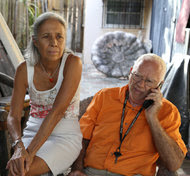 The lawyer for Rita Starr, 63, and her husband, Ivor Rose, 79, says a Miami businessman, Michael A. Stern, forged their signatures on loan documents, leaving them on the hook for tens of millions of dollars in mortgages they didn’t know existed.

Go to your Portfolio »
But then along came Michael A. Stern. A Miami businessman, Mr. Stern rented space from Mr. Rose in 2000 to open a Foot Locker store. Over the next four years, Mr. Stern, now 53, gained the trust of Mr. Rose and Ms. Starr, and they began investing in properties with him.
In addition to the investments that the couple knew about, Mr. Stern was also secretly taking out mortgages on other of the couple’s properties, according to a 2012 federal indictment. Their lawyer said he found that Mr. Stern had forged their signatures or cut and pasted them from other documents. Mr. Rose and Ms. Starr, who never received a nickel from the loans taken out on their properties, the records show, were on the hook for tens of millions of dollars in mortgages they didn’t know existed.
In early 2009, Mr. Rose and Ms. Starr started receivingforeclosure notices from institutions claiming to hold mortgages on properties the couple had owned outright. They thought it was some kind of mistake.
If only. Mr. Stern, who had left Florida for Uruguay, had stopped paying on the mortgages. Now the banks were coming after them. “Michael Stern was smooth and we’re not that perceptive,” Ms. Starr said. “He played us.”
In October, Mr. Stern was sentenced to five years in prison for swindling Dwight Freeney, a linebacker for the San Diego Chargers, out of $3 million. In California, Mr. Stern went by the name of Michael Millar. He will soon face prosecution in the Florida matter, said the prosecutor in California.
But the federal indictment didn’t end the troubles for the couple. They could lose all their properties and also be on the hook for millions of dollars. This is because Stewart Title, the company that insured the fraudulent mortgage loans — and whose policies require it to cover all the losses on the loans arising from forgeries and other defects — has refused to make a settlement on most of the properties.
And Stewart Title is doing this at the same time it is asserting, in another court venue, that one of its agents helped Mr. Stern secure bogus loans. It is suing that agent.
So how did this situation take such a twist?
First, it helps to understand the role of a title insurer. When a borrower applies for a mortgage on a property, the prospective holder of the note — usually a bank or investor in a mortgage trust — pays a title insurer to guarantee that the property’s title is free of defects, such as previous liens or taxes owed. Title insurance also protects a noteholder from loss if the lien created by the mortgage is invalid or unenforceable. Forgery, for one noteworthy example, invalidates a lien.
Stewart Title, a unit of Stewart Information Services, is based in Houston and is among the larger companies in the business. It is prospering, generating almost $2 billion in revenue last year, up 17 percent from 2011. Revenue in its title insurance unit rose 14.6 percent last year, while the money put aside to cover future losses declined $2 million, to $140 million.
Title insurers like Stewart hire agents to sell insurance policies to lenders and to handle mortgage closings. Court documents show that Stewart signed a contract in 2003 with Arlene Raijman to represent it as a title agent and lawyer. She collected title insurance premiums and was authorized to issue policies up to $500,000.
According to a lawsuit that Stewart filed against her, Ms. Raijman breached her duties at more than two dozen loan closings, issuing title insurance even though loan documentation was improper. Fifteen of those closings were for properties belonging to Mr. Rose and Ms. Starr.
Chief among the improprieties, the documents show, was her disbursement of loan proceeds to Mr. Stern rather than to the couple, as the loan documents required.
Stewart’s own court filings state, “Stern, with the assistance of Raijman, systematically induced Rose and Starr to use their property as security for loans for which they received no benefit and which benefited Stern, Raijman and the Raijman family entities.”
NEXT PAGE »

A version of this article appears in print on December 1, 2013, on page BU1 of the New York edition with the headline: A Trusting Couple, Now Thrown For Two Loops.

Posted by firesprinklers at 6:34 PM